The way season 2 has been edited, producers clearly want us, the audience, to believe that Megan will win. If I learned anything from watching 20 years of reality TV, you should always go against what the edits tell you. So for that reason, I think that Andrei will win because he did have a major setback last week so you would think he won’t win. I also want Andrei to win because he is from Vancouver like me.

Let us see if I am right.

The Bake: 24 mini swiss rolls (2 different flavours and styles so 12 each)

The Time: 2 and half hours

What I would bake: I made jelly rolls in the past and it is sort of like a Swiss roll so I think I might do okay. My first flavour would be a mango Swiss roll mostly using the Chinese sponge cake and the cream would be a vanilla mango cream (doubling down on the mango flavour) and the second would be a chocolate Swiss roll with mint cream.

What the contestants bakes and judges thoughts:

Andrei and I were on the same wave length in terms of the mango and both his bakes sound amazing. But Megan’s chocolate strawberry Swiss roll is definitely something that I would want to eat and maybe bake myself. One thing I will miss is seeing Dan taste testing everyones bakes.

Sachin: Neapolitan rolland lemon ginger Swiss rolls. The judges noticed how time constraint Sachin was as they noticed his fingerprints on the Swiss rolls. Bruno said the lemon one had a nice swirl but was a bit flat. Rochelle liked the ginger flavour. The Neapolitan one, Bruno liked the shape and swirl but Rochelle thinks the strawberries overpowered the chocolate

Andrei: Mango mascarpone made with a joconde sponge and opera cake Swiss roll with coffee buttercream. Rochelle called his Swiss rolls dainty but Bruno said there was no swirl in the opera cake one. Rochelle noted the cream was a bit think but Bruno liked the flavour. As for the mango Swiss roll, no roll again but Bruno thinks the cream is light and the cake cooked perfectly.

So all three had both positives and negatives. No clear winner here so we will call this a draw.

The Bake: A princess cake

How I would have fared: I first heard of this on The Great British Baking Show so luckily I know what it is but would I know how to make it? Definitely not. I am not 100% sure that I have the skills to make this or would even want to.

How our bakers fared: 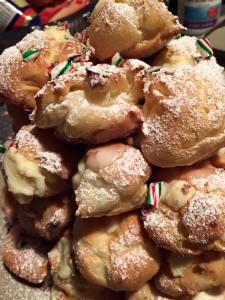 What I would bake: I made a croquembouche a few years ago that gets built up into a tower so I think I might do okay at this. But what sort of tower sculpture I would make? Cloud City. I am thinking maybe cream puffs gathered together for the clouds. The filling would be a vanilla coconut buttercream. And banana chocolate eclairs for the buildings amongst the cloud. As for the third part of it? Maybe one of the structures of Cloud City could be peppermint cream profiterole antennae.

What the contestants bakes and judges thoughts:

In terms of flavours, I am intrigued by Sachin’s strawberry champagne cream puff, Megans chocolate espresso eclairs and Andrei’s swans.

Sachin: Indian wedding choux tower made with strawberry champagne cream puff, pistachio kulfi eclair and coffee liquor eclairs. Rochelle could tell that Sachin put a lot of love into it. Rochelle like the crackling on the cream puff. Bruno liked the cream but Rochelle couldn’t tell apart the strawberry and champagne calling the flavours artificial. But Rochelle said coffee liquor eclairs was the flavours she was looking for. Bruno thinks the flavour combination of the pistachio kulfi eclairs works.

Andrei: Hommage a la patisserie made with Paris Brest, Gateau St. Honore and a croquembouche. Rochelle called it a joy to look at. Bruno said the croquembouche had a lot of filling and Rochelle loved the rasperry liqueur cream. As for the St. Honore, Bruno called it perfection. The Paris Brest, Bruno said the cream had a nice nutty flavour. Rochelle said that Andrei pulled everything off to perfection. And hearing those comments, Andrei for sure is the winner.

After talking things through with Dan and Julia, both judges know the decision will be a difficult one.

And the winner of season 2 of The Great Canadian Baking Show is…. 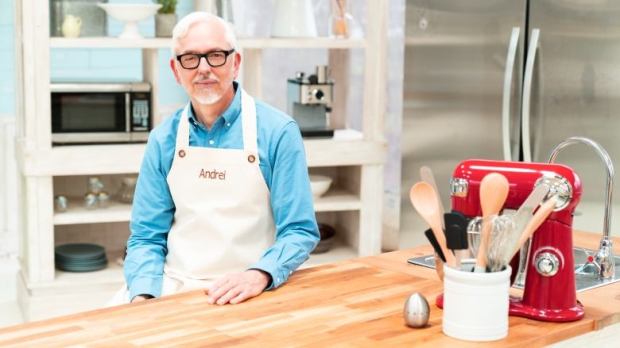 It turns out I was right. After the showstopper, I just knew Andrei was going to win. Andrei is a deserving winner as he was impressive week in and week out. So were you surprised at who won?

Thanks to everyone for reading and taking this baking journey with me. Hopefully there is a season 3 and that I will apply again. So fingers crossed that I get an audition and hopefully onto the show.