The title of the episode comes from the fallout of the revelation that President Marsden is an alien. This includes protest between pro and anti-alien protestors outside of the White House. Despite Supergirl’s pleas to stay on, President Marsden announces to the nation that she has resigned and says that Vice President Baker (Bruce Boxleitner) will do a great job leading the nation. As a side note, I happened upon the filming of the protest scene at UBC’s Main Mall. The VFX people did a great job disguising the Chemistry building as the White House.

When Alex gets no where with Otis except that there is another person involved with the Graves’ twins which prompts Kara to go to Lena and learn more about Mercy. Over Big Belly Burgers, Kara learn about Lena’s complex history with Mercy that includes Mercy being the former head of security of Lex Corp and that Lena looked up to her as a big sister. Kara also learns that Lena does share Mercy’s sentiment of why can’t humans be as powerful as aliens. We do learn that anti-alien online chatter has only increased since the President’s deception was revealed.

Meanwhile, Mercy has killed a L Corp employee for his laptop and when she returns to her hideout with Agent Liberty, we see that she has also stolen a vial of Kryptonite that makes Liberty very happy. The reason why Mercy wanted the laptop was to hack into L Corp’s servers to disable all of the aliens image inducers.

This has negative effects for Brainy who was out on a team building pizza run to his local hangout when it goes out. The pizza owner, who is usually friendly to Brainy, turns hostile and gets his employees to enact a beat down on Brainy but Nia, who was there to get coffee, stops them before any harm can some to Brainy. Luckily, Lena stops the hack and puts up firewalls so Brainy’s image inducer works and thanks to Nia, he also gets his pizzas. Afterwards, Brainy meets up with Nia and thinks she looks familiar and wants to get to know here. Nia would like that two. I am guessing this scene hints at how Nia is in the comics a member of the Legion as his Brainy. And from the interaction of these two perhaps potential love interests? 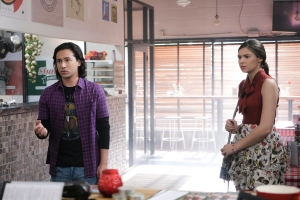 Standing up for Brainy, gives Nia the courage to speak to James about the importance of him writing an editorial to state CatCo’s stance in the growing anti-alien sentiment. Nia shares with James that she is a transgender woman and can relate to all of the fear and unacceptance people are having of the aliens on Earth. James explains to Nia that he isn’t going to write a editorial as he feels the important thing now is to just state the facts and be as balanced as possible.

Since Lena has put the firewall, the only way to get to L Corp’s servers is to attack it directly. So Mercy and her goons have arrived. Unfortunately, L Corp is in lockdown and Kara cannot get away from Lena and Eve. Kara tries to make excuses but Lena insists that she is safer with her. So Kara, Lena and Eve make a move to the servers. Kara manages to deflect the bullets but tells Lena that Mercy hired bad marksmen as they totally “missed” her. As they make there way to the servers, Mercy keeps on taunting them on various screens.

The three women looked to be trapped in a corridor but Kara manages to stop on door from closing. Alex calls for Supergirl but Kara has to pretend to receive a call from her to state that Supergirl can’t come at the moment. Looking for options to get away, Brainy gives wrong directions as he is thrown off his game because of his encounter at the pizza place.

While Eve is off trying to secure the servers, Lena and Kara make it into her storage room where she keeps her experiments and other toys. One of toys is Lex’s exosuit but one of the arms are missing. Mercy has it and Lena grabs another one. The two women trades blasts and Lena gets Kara to leave the room for her “protection”.

This gives Kara a chance to change as Supergirl who arrives to pin down Mercy and brings her into the DEO. 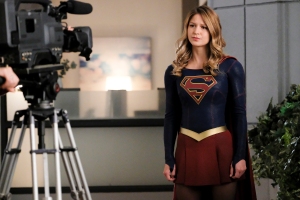 Kara gives a broadcast to the people of Earth to try and give a message of hope and acceptance. Seeing Supergirl’s broadcast, inspires James to write an editorial.

Once at the DEO, Mercy tries to turn one of the DEO agents, Jansen, to their cause but he remains loyal to Alex. But that doesn’t last long as Jansen sees Alex comfort Brainy and we see the aftermath of that betrayal, which his him springing the Graves twins free.

As for J’onn this episode, he was investigating what happened to Fiona. The trail leads J’onn to a cop that Fiona was investigating and he ends up following him to a rally that Agent Liberty holding spewing his anti-alien rhetoric and firing up the crowd.

With the Graves Twins free, Jansen has also stolen the lead dispersal device that was used in season 2 to rid Earth of the Daxamites. Inserting the Kryptonite vial into the device, it disperses into the atmosphere and we see Supergirl fall to the grown infected with kryptonite.