It is the premiere episode of Canada’s version of the very popular The Great British Bake-Off or as it is known in North America as The Great British Baking Show. As co-host Julia Chan said in the intro, 1000s applied but only 10 made it to the tent. Before those 10, there were 100 people that got to the audition stage. I was one of the lucky 100 that got to audition. To the right, you will see my signature bake: Tropical Bread.

So while I did not make it on the show, I will be recapping the baking action and detailing what I would have done had I gone on the show. If time permits, as my life is pretty hectic right now, I will attempt the technical challenge.

For this version of the Baking Show franchise we have the following:

The Judges: Rochelle Adonis and Bruno Feldeison are no Mary Berry or Paul Hollywood and Rochelle sure looks a lot like Kim Catrall.

The Hosts: Dan Levy and Julia Chan while enthusiastic are no Mel or Sue. However, I do love seeing Julia Chan back on TV after her run on Saving Hope ended.

For the first challenge, the 10 bakers had to make 24 cupcakes (two different flavours) in 2 hours.

If I were on the show I would have made Tropical Cupcakes that would have pineapples and coconut with a coconut butter cream. My second one would be a Mocha cupcake.

Jude from Victoria, BC

When her cupcakes came out, the definitely didn’t look great and she had to cut the edges off that the judges also called her on it. Also, Jude forgot to put the maple syrup in her cupcakes.

The show only had time to show the judges sampling the cotton candy cupcakes but Rochelle liked the creativity and what she did with the cotton candy that it brought her back to the circus.

Corey from Toronto, ON

Rochelle seem to think Corey but too much whiskey in his cupcake. 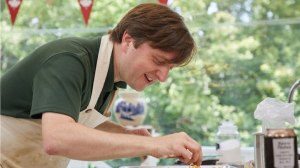 James from Richmond, BC

I think I recall James who was in the audition group before mines as we were all lingering around afterwards. Also, I am rooting for James because he is from my hometown and is a physics teacher like my dad.

The judges likes the simple presentation of the Ginger Stout cupcakes and the use of fresh ginger.

We only saw the Nanaimo bar cupcake judged and the judges liked the flavour and clearly could see it was a Nanaimo bar.

Bruno was impressed with the Birch cupcakes after all the challenges Julian had.

We see Pierre run into trouble when his white chocolate ganache separates, something the judges notice right away and noted it was also too sweet.

Sinclair from London, ON

Rochelle liked the presentation of the cupcakes in the glass bowls but the flavours need to be amped up.

Sabrina is the youngest competitor but strange that they didn’t state her age.with

Her cupcakes looked great and delicious that I definitely wanted to try. The judges agreed with me

Rochelle called the chocolate cupcake with rose icing as pretty and liked the balance between rose and chocolate. Bruno wanted more key lime.

The only tip from Rochelle is to read the recipe carefully.

What our bakers are making is a Battenburg Cherry and Pistachio Cake. It is a Rochelle recipe and the bakers have 1 hour and 45 minutes to bake it.

It seems a lot of the bakers didn’t know to slice the ends to expose the checkerboard patterns. While others were sloppy in applying the fondant layer and James had a tiny Battenburg and Terri gave extra checkerboards.

Here is how the bakers finished from 10th to 1st

Chocolate layer cake with at least two, ayers and two different flavours of chocolate. They have 4 hours to complete.

I probably would have made a cake similar to Vandana’s as they are flavours and chocolates that I enjoy.

His showstopper was a record player with a mirror glaze turntable but it wasn’t executed well.

He made an Elysees Cake wrapped in a Jaconde sponge. The end result just looked terrible and Bruno noted his mousse lacked structure.

Her cake was a garden themed chocolate raspberry and pistachio layer cake with chocolate butterflies (three on top for her three daughters). Rochelle thinks the butterflies were pretty and Bruno was won over by the combo of flavours. As soon as I heard that and the comments on her signature, it is obvious she will be the Star Baker.

Rochelle thought the cake was lovely and soft. Bruno thought the cream was lovely. I believe this cake saved her from going home as she wasn’t doing too well.

Milk and Cookies Cake with white, dark, milk and blonde chocolate. The presentation looked amazing but Rochelle thought it was a messy use of chocolate.

Builder’s cake with molding chocolate tools and a sail. Rochelle loved the cement and imperfect look of the cake. Bruno said it was a great chocolate cake

Melted ice cream cone cake that had quadruple layers. This also looked great but Rochelle noted it was leaning and not chocolatey.

Galaxy space cake with an interesting mirror glaze cake that Bruno said was gooey but not in bad way.

Chocolate raspberry layer cake with white chocolate accents. The judges thinks the cake was delicious despite the mirror glaze fail.

In Danger: James and Pierre 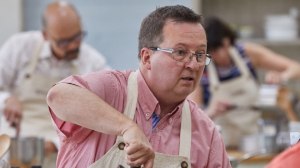 I pretty much knew Pierre was going home and Terri was Star Baker. The first episode was good but still like the British version. Looking forward to seeing how the show will grow on me and if I will warm up to the judges.