We get a new voice over that feature the new young Kara and Erica Durance as Alura!

Kara and J’onn’s Adventures on Mars

Kara is helping prepare Alex for the bridal shower that Eliza is throwing for her daughter and Maggie. Alex is not looking forward to it and doesn’t think it will be fun. The two are interrupted by J’onn who is letting them know he is going to Mars to help M’gann. Alex and Kara doesn’t think it is a good idea for him to go alone so Kara volunteers to go with him.

Kara and J’onn use his spaceship disguised as a 1950s corvette and make it to Mars. M’gann and J’onn have a joyous reunion but another White Martian, T’lall isn’t so welcoming.

M’gann reveals the reason why she called J’onn. She and her resistance fighter tell J’onn they found a Green Martian prisoner camp and found one prisoner: his father M’yrnn (a spiritual leader of Mars) alive.

J’onn feels guilty that his father spent centuries thinking he was dead and is the last Martian. M’gann and T’lall reveal that M’yrnn was kept alive because the White Martians need to know the location of the Staff of Kolar, a psychic weapon that can locate the resistance fighters.

However, the White Martians is found it so M’gann et al need M’yrnn to tell them hence why J’onn was called. 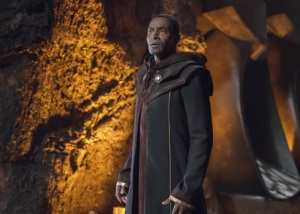 When J’onn goes to see his father, he doesn’t believe that it is him but a trick from the White Martians as he knows he son would not have fled.

T’lall wants to force the information out of M’yrnn but this will kill him. J’onn promises he will get the information. J’onn tries again but M’yrnn (who has assumed a human form) still doesn’t believe that J’onn is who he said he is. M’yrnn tells the history behind the staff and his vow to protect it.

T’lall not happy and seeing no progress knocks M’gann away and tries to get to M’yrnn but Kara stops him and warns J’onn who grabs his dad to the ruins of M’yrnn home. M’yrnn is offended that a White Martian would take him to his ruined home.

Kara gets through to M’yrnn to open to what J’onn has to say. J’onn shares a memory of how M’yrnn surprised him for his birthday, a secret his daughters K’im and T’anya kept.

The resistance White Martians arrive to try and force M’yrnn hand but it is not necessary as he leads them to the location.

The White Martians are looking at the sphere when Kara, hilariously, pulls up in the corvette blasting Britney Spears asking for directions to Earth. This allows J’onn and M’gann and the resistance fighters to arrive and fight the White Martians.

However, T’lall realizes it is a bad idea for their side to have the staff to so they give it to J’onn and Kara to take back to Earth.

J’onn tries to convince M’gann to come back to Earth with him but she says there is still work to be done on Mars. They promise to see each other again and talk to turns to what will happen with M’yrnn.

We learn that Kara and J’onn have brought M’yrnn back to Earth and father and son head home.

During dinner with Eliza, Maggie reveals the day she got kicked out of her house by her father who told her she brought shame to their family. Later that night, Alex suggests that Maggie invite her dad to their shower since they were once close before he kicked her out. Maggie thinks it is pointless and considers the case closed. But later, Maggie calls her dad and leaves him a message inviting her to her shower.

Maggie goes to pick her dad up at the bus depot and is not surprised her mom did not come. But Maggie is surprised to learn her dad has been following her police career and tells him she cracked a case thanks to advice he gave.

Of course the Barenaked Ladies would be blasting during the shower. Mr. Rojas arrives and meets Alex. When it comes time for gifts, Maggie tells Alex that she is the greatest gift she could get and starts to kiss Alex. This proves too much for Maggie’s dad and he storms out.

Maggie follows and wants to know what is the deal with her dad. Mr. Rojas tells Maggie that he fought hard to be accepted in America when he first arrived so his child wouldn’t have it so hard. However, the world has become worse and thinks that Maggie won’t be accepted because she is a lesbian. Maggie’s dad tells her she can live her life however she wants but not to throw it in his face.

At the bus depoy, Maggie waits for her father to tell him that she no longer desires to be accepted by him because she has surrounded herself with people who do and love her. Maggie tells her father that she is comfortable in her own skin and leaves. Later at their place, Maggie tells Alex that all she ever needs is her and her love. However, children aren’t in the picture and Maggie needs to know if Alex feels the same way. Alex tells Maggie that she does but we know otherwise.

And can I saw that Floriana Lima really hit it out of the park in this episode. Lima was amazing especially with her scenes with Carlos Bernard. It really is a shame that Lima isn’t sticking around the whole season but I do hope she does come back.