Fun fact! Missy Peregrym appeared in Smallville  in season 3’s “Delete” as Molly Griggs. While Missy and Erica never shared scenes as that couldn’t have been possible as Erica joined the show in season 4; what makes this a fun fact is that this episode is the first time ever that the name Lois Lane is mentioned and of course Erica would go on to play that role.

Now back to our recap…. It looks like Charlie’s gift comes to a head while Alex helps a self-help guru get over a trauma from her past to help her through a surgery and Dana helps Shahir make movie to help him with his adoption process. That’s a lot helping going on.

Dev gets punched in the face when trying to help a wrestler who he thought was on steroids. Cassie manages to calm down Jake to take out pieces of glass out of his shoulder. Jake sort of flirts with Cassie by saying her name is short of Cassandra of Greek mythology. While examining Jake, Cassie observes his angry outbursts and calms him down.

Meanwhile, Billy is patching up Dev and wonders if he is okay if he asks out Cassie as he believes she likes him too. Cassie interrupts and wonders what could be wrong with Jake. Billy mentions how Jake hits his head with fluorescent lightbulbs as part of his act. Cassie determines that because of this, Jake has been slowly poisoning himself with mercury. Cassie lets Jake know that it will flush out of his system and she wants him to come back in a week so she can see how he is doing. Jake seems to interrupt this as Cassie wanting to see him but she quickly says that any doctor can see him.

Later in the on-call room, Cassie has changed from scrubs to her street clothes when she finds a book of Greek mythology that is booked marked to the chapter on Cassandra. Cassie is puzzled but I am worried that she has a stalker and something bad is going to happen to her. I really hope that the show doesn’t take Cassie into this dark territory as we near the end.

Dana is dealing with twin filmmakers Dom and Iris Salt. They were brought into the ER because they fell out of their treehouse while filming their horror movie. Iris and Dom’s dad is a TV producer and are afraid to have him called in.

Dom and Iris are using the halls of Hope Zion to finish their horror movie when Dana has to tell Dom that he has a lesion on his liver and he needs to rest so it heals. To get the twins to stay put, Dana gets them to turn their film into a documentary to help Shahir make a video help with his adoption case.

While filming the video, Iris collapses and this is the time Mr. Salt arrives. Mr. Salt is quite the silver fox and during his interactions with Dana, I sense some chemistry. Iris collapsed because some fluid has leaked from her brain that Shahir needs to drain. Shahir manages to distract Iris enough to perform the procedure.

Afterwards, Dana, Shahir and the Salts sit down to watch the video that Dom and Iris made. Dana narrates the video to say any child would be lucky to get Shahir as a father. Dana ducks out of the film before it is over and Mr. Salt follows to congratulate her on the film. Dana tells Salt that she thought turning her specialty to trauma would fill the void she thought she was missing but it didn’t. Mr. Salt suggests that Dana become the host of this women medical show he wants to pitch. Dana thinks he is joking but Mr. Salt is serious and asks her out to dinner to discuss the details. Mr. Salt assures Dana that the dinner doesn’t have to end with them sleeping together in order for her to get the job. Dana jokingly says that is too bad.

Alex and Dana are attending Layla Rowland’s meditation class. The two ladies aren’t doing a good job at following the instructions as Dana just wants to ask about Alex and Charlie. But their talk is interrupted when Layla collapses in pain. Dana and Alex rush to her and determines she needs to go to Hope Zion and ends the class.

At Hope Zion, Layla has a hernia that has gone untreated for a while. Alex tells Layla that she needs surgery to fix it. Layla says she can have the surgery but refuses to go under and needs to be awake for the whole thing. Alex doesn’t think it is a great idea as it poses a lot of risks with her being awake such as moving around too much that could be fatal.

Layla fires Alex and discharges herself. Alex finds her and tries to talk her into having the surgery. Layla explains her fear of being unconscious resulted in the fact the last time she was, she awoke to a member of the football team on top of her, raping her. It took Layla a long while to regain her strength and power and control over that moment. Alex and Layla come to a compromise with the anesthesiologist on how to perform an awake surgery. This involves a local and a muscle relaxant with Layla controlling her breathing.

During the surgery, Alex opens Layla up and all seems good with the controlled breathing. However, as Alex needs to push through some scar tissue, things start getting painful for Layla that she asks Alex to distract her and tell her why she came to her class. Alex sort of discusses why she came that involves Charlie but she runs into a complication when Layla’s bowel’s are necrotic. Alex has to tell Layla that they need to put her under to fix the problem or she will die. Layla panics and starts to squirm creating more problems. Layla doesn’t want to go under as she fears what will happen. But Alex tells Layla they will work together to overcome her trauma. Layla agrees to go under and the surgery is successful.

During recovery, Layla wants to help Alex with her issue as she helped with hers. At episode end we see Alex come to a moment of realization that hopefully gets her back to Charlie and helping him deal with his gift.

It is Charlie’s gift that seems to be getting worse and instead of helping people is causing problems. We see Charlie walk out of a surgery for Noel who is starting to crash. Dawn wanted to Charlie to help save him and Noel’s spirit is asking the same but he just walks out as he remembers encountering Noel on a road side.

Dawn is angry at Charlie for walking out and says the board has observed his issues along with colleagues.

Amos tries to get Charlie to talk to him and continue what Gavin was trying to do.

Charlie does open up a bit to talk about Noel and how he saw him collapse on the road and pulled over to help. 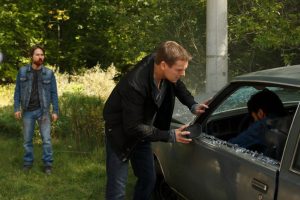 However, Charlie was talking to a spirit and comes across Noel’s car with him inside and that he was drunk. The reason why Charlie walked out of the surgery was that Noel lied to him about the nature of the accident.

One thing that Charlie is puzzled is that Noel keeps on talking about a cat. Charlie sees a cat outside of his office and goes to follow it. Amos is concerned and follows Charlie too. Their journey leads them to the morgue where Charlie pulls a sheet off a dead boy. This boy was riding his bike when a drunk Noel hit him and his stuffed cat fell out of his bike. We flashback to Charlie finding the boy and realizing that talking to spirit Noel prevented him from finding the boy and potentially saving him. 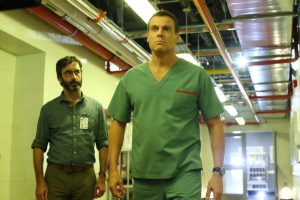 Amos starts to yell at Charlie that he is letting the spirits take over and potentially endangering Luke. Charlie yells back at Amos. Dawn walks in and sees Charlie talking to himself and we see Amos starting to bleed from his head and we realize he is a spirit. Charlie breaks down and says spirits are everywhere. Dawn goes over the comforts a grieving Charlie.

Back at Charlie’s office, he is guilt-ridden over what happened to the boy and wants to tell the family. Dawn tells Charlie to go home and rest and she will talk to the family. We see Dawn go and tell the family with the mom crying over her son’s stuffed cat.

Later, Dawn sees the surgical board is filled with a lot Charlie’s surgeries that he asked to be moved up. Dawn tells the nurse to hold off on telling the patients and she goes to call the board concerned for Charlie. We see Charlie in his office not looking like himself and we all grow concerned for him.