It was an Alison-centric hour of Orphan Black but that doesn’t mean we didn’t get to see what was going on with our other clones, in particular Rachel and what she is up to with Kira. 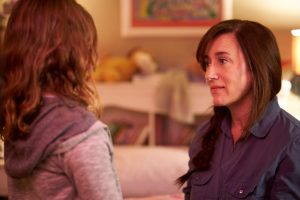 Sarah, Kira, S and Felix with Alison and Donnie via Skype hold a memorial for MK. Afterwards, S is bringing Kira to Rachel and Sarah is still not happy that her daughter won’t spill what they do together. Considering all that has happened recently, that they should just lay low. Laying low to Felix means painting Sarah butt naked.

Meanwhile, Rachel sees Helena’s medical file that indicated the miraculous healing powers of one of her babies. Rachel thinks that Helena’s twins could prove to be more valuable than Kira. Nonetheless, we see Rachel clip and collect Kira’s fingernails. Afterwards, Rachel lets Kira play with a lab mouse. This mouse apparently has been engineered to re-grow its own skin and fur and Rachel indicates that they possibly have a lot of common.

Later that night, as Kira prepares for bed, she takes out a pen knife to possibly cut off one of her fingers to see if it will grow back. 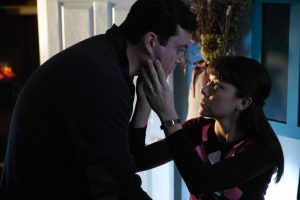 We flashback to a time before Alison was fully immersed in Clone Club, before she realized Donnie was her monitor, before she let Aynsley die. Speaking of Aynsley, we are in a period before Alison had an affair with her husband Chad and having a dinner date at the Hendrixes. Alison, Chad and Aynsey decide to partake in some magic mushrooms. While on her high, Alison meets Cosima for the first time, a meeting arranged by Beth. The point of this flashback was seeing Alison feeling defined by her role in Bailey Downs and Aysnley giving her some advice to break free from the community.

In the present day, Alison and Donnie are visited by Frontenac, one of Rachel’s men, wanting to know where Helena is. Donnie says he doesn’t know. Frontenac then dismisses Alison and her role in Clone Club saying that Cosima, Sarah, Helena and even MK are the more valuable clones.

Feeling a bit hurt by Frontenac’s comment, Alison decides to get back into the community by going to the Fall Fair and trying to take over the organization of the day from Nona Walker played by Canadian screen legend Jayne Eastwood. When Alison arrives, the Fall Fair looks well in hand and tries to take over but Nona won’t let her. Alison, feeling her position being threatened is about to give Nona a bottle of iced tea that has been laced with sleeping pills (which she was going take herself) but she changes her mind when Reverend Mike arrives.

Meanwhile, Donnie, dressed in a kilt for his Highland dance at the fall fair, is greeted at his home by Art and Engler with a search warrant. Art and Engler are investigating Donnie’s and Alison’s role in the murder of the drug dealers back in season 3, the ones that Helena killed so they can get their money back. Just when we think Art is on Rachel’s side, he assures Donnie that he is not. Before Donnie goes to the Fall Fair, he warns Art not to go to the garage.

Back at the Fall Fair, Alison runs into a Aynsley memorial and her widower Chad and their kids. Chad doesn’t look to well since Aynsley death.

Alison then runs into Ramon, their drug supplier, who now works for a party supply place, reaming him out for ripping them off. Ramon swears he did not rip them off and offers booze and a joint for relaxation.

When Donnie arrives, he finds Alison and Ramon jumping around a bouncy castle. After getting his wife out of the bouncy castle, Donnie calls Sarah and Felix to let them know about Art and Engler being at their house and possibly discovering Leekie. Sarah and Felix defies S to lay low and venture out to rescue the Hendrixes. Donnie then downs the whole bottle of the laced iced tea.

As night descends the Fall Fair, Alison tells Chad that Aynsley death was her fault but before she can elaborate, Chad just thinks it is guild over their affair is why she blames herself. Chad said their is nothing to forgive and that Aynsley will want them to move on.

At the Highland dance, it goes well for a bit until Donnie completely passes it. Thankfully, Felix is there for the rescue.Alison watches the performance from the wings and sees Donnie collapse and sees the empty iced tea bottle realizing what has happened.

Felix and Alison rush to Donnie’s side. The people of Bailey Downs starts to snicker and Alison fights back and tells them she is part of something bigger than they can imagine. Felix closes the curtain to stop her from saying too much. In this scene, what made me laugh so hard is it looked like Alison and Felix dragged Donnie with his face on to floor to get him behind the curtain. Donnie is okay and throwing is guts out to get the drugs out of his system.

Meawhile, Art catches Engler planting evidence in the garage to frame Alison and Donnie. Engler then notices fresh concrete. Engler and Art work on the garage floor to see what they find. Art spies Sarah outside and he goes out to see her under the pretence of going to the washroom. Sarah tells Art that it is Leekie and a Castor clone in the garage. Art and Sarah bring in Donnie, Alison and Felix into the conversation. Donnie tells the group he will tell the Neolutionists where Helena is if it get them off their back. But everyone thinks it is a bad idea so Alison comes up with a better one.

Alison goes to see Rachel and brings her Leekie’s head while at the same time Engler has found his decapitated body. Alison tells Rachel they can arrest her and Donnie but the truth is everything will get traced back to Rachel. Alison then demands to call of Engler and Art off of her and Donnie and leave them alone.

Just as when it looks like Art is going to kill Engler, she gets the call from Rachel to stand down.

The next morning, Alison tells Donnie that she is going away to find out who she is outside of Clone Club. Before Alison leaves, she and Donnie sing a duet together.

As for Helena, we see that she is in a convent scribbling in her diary which could be of something of importance if I could read Ukrainian.

So if this the end of Alison on the show? Or are we going to get her back for the series finale? I hope this isn’t the last we see of Alison.