As we near the end of Saving Hope, we say goodbye to a fan-favourite character, I think, and there might be trouble in paradise for my favourite couple on the show, which I sincerely hope not. 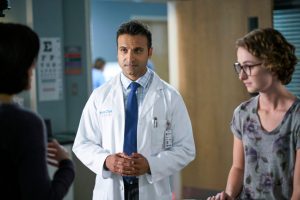 To prepare him and Jonathan for fatherhood, Shahir has downloaded a baby-caring app that replaces the old school of caring for a sack of flour or an egg. This app has been keeping Shahir up at night and questions his suitability of being a father especially with Jonathan starting a new job back on Bay Street. If you aren’t from Toronto, Bay Street is the Canadian equivalent to the US’ Wall Street.

Shahir doubts get heightened with his patient, Nellie, a famous classical pianist, whom he is a fan of.

Cassie brings Nellie to Shahir’s attention because of her complaints of headaches, lack of appetite and nausea. Nellie has come in with her daughter Poppy who is concerned for her mother.

We learn that one of the homeopathic remedies that Nellie has been taking is slowly poisoning her but she has been taking that remedy to treat the tremors associated with Parkinson’s Disease. Nellie has tried everything to lessen the symptoms and rather continue to poison herself to she can finish her opus. Shahir suggests deep brain stimulation that will help with her symptoms but there are some cognitive side effects. Nellie turns down the surgery as she needs to finish her opus. Poppy is offended that she is putting music once again ahead of her health and her, as she always has been and leaves. Nellie asks Shahir how long will she have if she goes through the surgery and Cassie answers that she will have years. Nellie thinks that would be enough time to finish her opus but Cassie counters that it gives her more time with her daughter.

Later, Nellie decides to go through the surgery and wants to know what are some of the cognitive side effect. Shahir tells Nellie that one of them is she might forget how to play the piano but it could be only temporary. Poppy thinks that is a deal breaker but Nellie says that music comes from the heart and asks her daughter to teach her how to play music again if she does forget. We later see mother and daughter duet on “Fur Elise” on the hospital’s chapel’s piano.

After the events with Nellie, Shahir doesn’t think he can be a father and tells Jonathan so who is not pleased with his change of heart and leaves in a huff. We then see Shahir listen to Nellie and Poppy play when he as to deal with his digital baby. When the baby settles, it does look like Shahir might be changing his mind about fatherhood. 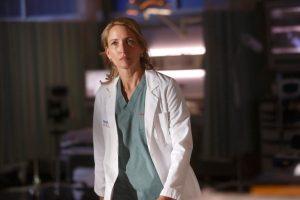 Dawn has gotten two tickets for her and Zach to attend a Steve Martin concert. Unfortunately, it is on Zach’s bowling league night and can’t go. A frequent flyer patient at Hope Zion opens Dawn’s eyes that Zach is lying. When confronted, Zach admits that he is actually spending time with his sons. Dawn understands and wishes Zach would have been honest with her and would love to join them on their activities. However, Zach has to tell Dawn that his sons don’t like her because she isn’t their mother. This upsets Dawn and Zach tries to make her feel better but we don’t know the status of their relationship.

Charlie day starts off with a heavy-set ghost needing his help but Charlie can’t help him because he is off to the ER for a case of a magician Abadon, getting seriously injured when performing his latest allusion.

Abadon has two broken legs but even worse is blood clots have developed where Charlie can’t do what needs to be done on his legs. Abadon’s spirit appears to him and needs Charlie to fix his legs so he can continue on to do his tricks. The heavy-set ghost is also still hanging around and Charlie gets Abadon to entertain him while he fixes him.

Afterwards, outside Charlie’s office Abadon confronts him about how things are going. Charlie tells Abadon that his legs are okay but Dawn is still working on his blood clots. All of a sudden Abadon’s speech starts to slur and Charlie tells him he is stroking out. Charlie goes back to the OR to tell Dawn that Abadon is on the cusp of having a stroke and needs to have a procedure done to stop it. Charlie asks Dawn to trust him and she says she hopes he is right. Charlie seconds that Abadon thirds it while the OR anesthesiologist fourths it to the surprise of Charlie and Abadon.

While Dawn is working on Abadon, he begs Charlie to teach how to see spirits as he really wants to see his husband again who died early on in their marriage of a brain aneurysm. Charlie wishes he could but even he doesn’t know how he got the ability.

Later on, everything is okay and Charlie visits Abadon who believes they’ve met before. After performing a card trick, Charlie tells him he is going to be fine. We later see Abadon tearfully look at a picture of him and his husband before making it magically disappear.

Maggie and Sydney with special appearance by Alex

Alex frets over losing Maggie to London when Charlie mentions an obstetrics staff position that has opened up and wonders if they should mention it to her.

Alex then attends an ultrasound of her baby where Sydney once again lets slip the gender of her baby. As in Alex’s dream, it is indeed going to be a girl.

Sydney then talks about how Maggie will be starting over again in London as she needs to re-certify. After Sydney leaves, Alex then lets Maggie know about the staff position at Hope Zion. Maggie says she will stick to her original decision to leave for London. Maggie also notices how Alex seems to be troubled too. Alex admits that she is having weird dreams and isn’t connecting with the pregnancy.

Before Maggie can process, she and Sydney have to help deliver the baby of Kim Storms, a nurse at Hope Zion and also the wife of Dr. Arnie Storms, plastic surgeon at Hope Zion, whom Dana and the rest of the staff don’t seem to like. The baby is quickly delivered, a girl who they name Alice, and everything seems okay. However, Kim has pain all over and difficulty breathing. Kim also has blood clots that Sydney and Maggie treat. Arnie is upset that no one called him and starts yelling and blaming Maggie and says he won’t give a good word about the staff position. Sydney hears this and confronts Maggie. Maggie tells Sydney she found out that day but she won’t take it. Sydney doesn’t want to be the one to prevent Maggie from landing her dream job and tells her not to come to London with her.

So Maggie goes to see Charlie and tells him she would like the position. Charlie then gives Maggie the keys to her new office. 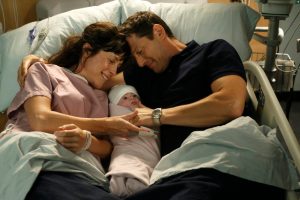 When Alex goes to see Kim and Alice, Kim starts to experience more pain. There is more complications that can get worse because of the medication that Sydney and Maggie gave her to treat the clots. Sydney has one last hurrah at Hope Zion watching Maggie and Alex perform a procedure that saves Kim’s life and we later see her and Arnie share a moment with their newborn.

Sydney leaves Kim’s surgery early to head off to the airport. Later, we see Maggie at her new office and she tells Alex that Sydney left her a note in Hebrew. Alex clearly can see that Maggie is not happy and tells her that she has never seen her happier then when she was with Sydney. So making like Phoebe and Ross, Maggie and Alex commandeer Zach’s car to rush to the airport before Sydney leaves. Before though, the Bro TP that is Zach and Maggie have a nice good bye.

Alex races Maggie to the airport and two discuss how much they will miss their friendship. And we has viewers will too as I’ve always enjoyed their sisterhood. 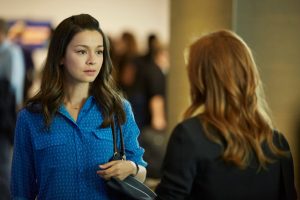 At the airport, while not quite “she got off the plane” moment, Maggie discovers that Sydney didn’t get on the plane. Sydney reads Maggie the letter which is pretty much that the person is the home. The two declare their love and Maggie promises to buy their airplane tickets.

So this seems to be the end of Julia Taylor Ross’ time on the show and I am going to miss her. Ross brought such comedy to the role and Maggie was such a hot mess at times but so glad she found true love in the end.

Outside the departures area, Alex notices Maggie’s Hope Zion staff badge on the passenger seat. Alex puts it on and speaks to her baby. Alex then asks Charlie to care for Luke so she can have a girls night out with her daughter.