It is a James-centric episode and we also learn Rhea’s true purpose on remaining on Earth.

James is out patrolling as Guardian and stops a mugging. However, James grows disillusioned in his vigilante role when the person he saved was more afraid of him than the crooks. The next day at Simmons Square, James tells Winn he had hoped to be beacon of hope like Superman and Supergirl rather than instill fear. Winn tries to convince James that what they do as Guardian does make a difference. Their talk is interrupted when an alien woman rises in the air and starts to use her telekinetic power to wreak havoc in the square. James helps clear people to safety and Supergirl arrives to catch a flying car about to hit a building.

Back at the DEO, the team determine the alien was a Phorian, a normally peaceful race that not possess telekinesis but are also telepaths.

Meawnhile, Lena and Kara are catching up over lunch at CatCo talking about Justin Timberlake, N’Sync and Britney Spears. Lena starts to talk about a project she is working on. A lot of the tech talk goes over Kara’s head but sees how excited Lena is especially about the partner she is working with whom she calls a mentor.

We later see Lena and Rhea meet up for dinner talking about the project and why it hasn’t seen success yet. Lena wants it to work as the portal can not only be a source of clean energy but it is also a way for Rhea to go home. Rhea leaves the restaurant to go back to the lab to do more testing. Mon-el is out for a stroll eating ice cream and thinks he sees his mom outside the restaurance. But when Mon-el gets Winn to scan Earth’s atmosphere there is no trace of the Daxamite ship. Mon-el pays Kara a visit at CatCo and tells her that he thought he saw his mom. Kara tells Mon-el it is okay to miss his mom.

Back at the DEO, J’onn benches James from helping in their investigation. During a Guardian run, James questions an alien who gives him the address of the Phorian who attacked Simmons Square. When James arrives at the address, he finds a scared boy (This is Us’ Lonnie Chavis) but gains his trust when he takes off his Guardian mask.

James brings him to the DEO and Alex tries to question Marcus but isn’t saying anything. Alex isn’t getting anywhere with Marcus but sees that James is the one that he will open up to. James takes him out of the DEO and back to CatCo. In James’ office, Marcus finally opens up when James mentions how his father was a soldier. Marcus then sees a news story about his mom attacking the square and tells James his mom would never do anything like that.

Meanwhile, Lena is having difficulty in getting the portal to work. Rhea gives her a pep talk that involves going against what Lex would do. Lena figures it out and gets the portal to work. In this brief test run, this triggers Marcus’ or any Phorian’s telekinetic power. Marcus’ power starts to bring down CatCo that causes Miss Tessmacher to flee to safety. Kara as Supergirl grabs Marcus and flies out. Marcus’ telekinetic power only stops when Lena powers down the portal. Marcus is put in a DEO cell. At first James doesn’t want to questions Marcus again thinking he failed and endangered people but a talk with J’onn inspires him to reach out to Marcus again. James does manage to get Marcus to open up where his mom his and convinces J’onn to let him out so he can lead him to her.

Alex determines a surge in power at the time of the Simmons Square and CatCo attack is what caused the Phorian’s powers to go haywire. Winn mentions some ion signature that is part of the energy surge. This rings a bell to Kara as something that Lena was working on. Kara calls Lena but Rhea answers the phone. Rhea taunts Kara for her hubris and wants her to be punished. Kara puts Rhea on speaker phone so Mon-el can hear. Mon-el tries to get his mom to see some reason but refuses.

At Lena’s lab, she is thrown aback when Rhea powers up the portal. Rhea tells Lena what whatever happens, their friendship was true.

As the portal powers up, James arrives with Marcus so he is reunited with his mom. At this warehouse are other Phorians and Winn’s portable telekinetic dampener cannot cover the 12 Phorians there as their telekinetic powers go online. Things get chaotic and Winn tells James they need to go but James manages to get through to Marcus and his telepathic powers manages to depower everyone telekinesis. 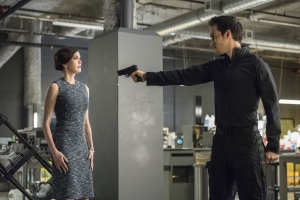 This power surge alerts the DEO to where Rhea is. Mon-el, Kara and J’onn arrive. Kara and Rhea fight which knocks out Lena. Kara then flies out to try and shut down the portal. J’onn attempts to stop Rhea but she uses a White Martian device that controls Green Martians. Mon-el tries to stop his mom by holding a gun to her and threatens to shoot her. Rhea knows Mon-el won’t kills his own mother because he loves her still. Mon-el demands to know where his father is and Rhea said that he killed himself after Mon-el abandoned them. Mon-el doesn’t believe his mom but he doesn’t pull the trigger.

We learn that Rhea wanted the portal to work to allow thousands of Daxamite ships to go through. As we see these ships go through the portal, Kara sees all of them flying above National City and Rhea calling Earth New Daxam. We then see Rhea teleport away with Lena and Mon-El.

Next week is the penultimate episode and we get the return of Cat Grant and an epic battle between Earthlings and Daxamites.