Season 1 of CBC’s latest version of Anne of Green Gables has ended on what I think is a bit of a disturbing departure from the book that I don’t quite like. I know that Moira Walley-Beckett wants to make this version grittier but if she decides to go in a certain direction that I think she is setting up for season 2 (if there is one) then I am going to stop watching because that is not what the story is about. Before I get to those thoughts, let’s recap what happened in the episode. 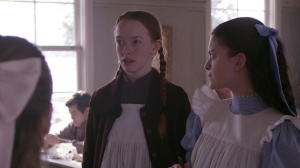 It is Christmas time in Avonlea and as the school house is practicing for the upcoming concert and preparing decorations, Anne overhears Josie talking smack on how the Cuthberts are now poor and probably will send Anne back. Anne snaps and yells and Josie who realizes that she didn’t know that the Cuthberts mortgaged Green Gables.

Anne rushes home and overhears Marilla yelling at Matthew for gambling way their future and Anne’s future. But Matthew tells them there is nothing that can be done, he spent the loan money on high yielding crops that he hopes will help pay off the bank’s loan. More yelling ensues and this causes Matthew to collapse to the floor. The doctor tells the ladies that Matthew had a heart attack and it will take month’s to recover. The doctor says that Matthew cannot undertake any hard labour. Later that night, Marilla is pouring over the books. Anne comes down and offers her assistance saying it is the least they can do before they send her back. Marilla assures Anne that she is not going away and jokingly said that she is stuck with them and all their troubles. Anne goes over the books and notes how much time they have before things get dire. At the bank meeting the next day, the bank manager tells the ladies that the bank will foreclose on their loan at the end of the month if it is not paid in full. In fact this bank manager was not being forthcoming because he didn’t want to deal with the women but just Matthew. After this news, Marilla rushes out to place an ad in the newspaper and Anne looks into the dress shop window where Matthew got her puff sleeved dress

That night, Marilla and Anne go through stuff that can be sold to help raise money to pay off the loan. One of those items is the amethyst brooch that Marilla once wrongfully accused Anne of stealing. Anne offers to return her puff sleeved dress and get the money back. Marilla realizes that she can’t leave Matthew alone again so she sends Anne and Jerry to Carmody to sell their possessions and one of their horses. The money from the sale of the horses will go to Jerry as his final wages since he can no longer be kept on at Green Gables. Anne feels like she can do this on her own but Marilla insists more for her safety than anything else. Before they set off, Diana gives her vanity set for Anne to pawn. On the journey to Carmody. Jerry gets on Anne’s nerves but the two make it to their destination.

Anne’s first stop is the dress shop where she returns the puff sleeved dress. Jeanie recognizes Anne from the dress and wonders why she wants to return it. Anne tells Jeanie that while she loves the dress, she has to return it to help her family. We see Jeanie give more money back for the dress than probably Matthew paid but Anne doesn’t know any better and accepts the letter. Anne’s next stop is the pawn shop where she makes up stories for each item in hopes of getting more money for it like Diana’s vanity set belonged to Queen Victoria and a pen belonged to Prince Albert. At first the shop keep doesn’t quite believe Anne’s tales but seems to have been convinced enough to give her good value for the items. As Anne leaves, she sees the shop keeper place the amethyst brooch in the window.

Meanwhile, Jerry has sold the horse but gets jumped on and beaten up by two men who take the money and run. As Anne waits for Jerry, she runs into Gilbert. Both are surprised to see each other and the two go to a local cafe to talk and get something to eat. We learn that Gilbert is working at a dock to earn money for passage on a ship. Gilbert plans to travel and will come back to Avonlea when he feels the time is right. Anne asks about Gilbert’s farm and he responds he has not made a decision but believes he has time. Gilbert then mentions that Matthew offered to work his land for him and Anne is not surprised at his generosity. Anne then apologizes for not being sensitive enough to what Gilbert was going through and he accepts her apology saying all is water under the bridge. I know the two actors are kids but man there as some serious chemistry between the two that totally hints at their future romance. Also at this cafe is the two men that robbed and beat up Jerry. The two men notice the ad that Marilla placed asking for boarders. It looks like the two men have their next target.

When Anne and Gilbert leave, Anne mentions that she misses Gilbert which surprises him. Anne covers to say she misses their academic rivalry. The two call a truce and shake hands. When Jerry arrives he thinks Gilbert is attacking Anne and tries to stop it. Anne tells Jerry everything is okay and sees what has happened to him. Jerry mentions getting robbed. The two men see Jerry through the cafe’s window but Jerry doesn’t see them. Gilbert and Anne part while she and Jerry head to Aunt Josephine’s for the night.

At Aunt Josephine’s, she welcomes both of them with open arms and a hot meal and a bed for the night. However, Jerry is not used to sleeping in a bed of his own and asks to sleep in Anne’s bed. The next day, Josephine hires Jerry to work Green Gables and pay his wages. Josephine then gives Anne a book by George Eliot.

While Anne and Jerry were in Carmody, Marilla is taking care of Matthew when he talks about how he should die as his life insurance will take care of everything. Marilla doesn’t want Matthew talking like that. However, while Marilla is away doing some of the farm chores, Matthew makes his way to the parlor to grab his gun. Because Matthew is so weak, he struggles putting the bullets in. In the barn, Marilla spies a visitor arriving. The visitor is Jeanie who finds Matthew trying to put bullets in his gun. Marilla comes in to and sees what was about to happen. The ladies help Matthew back to bed.

Jeanie has a moment alone with Matthew to tell him she met Anne and she would be devastated if she lost him. When Jeanie leaves, Marilla is mad that Matthew would do this to them. Matthew then promises not to kill himself.

None the wiser, Anne returns home and gives Matthew a big hug. Later that night, Marilla is counting the money that Anne managed to get. Anne discovers money in the book Josephine gave her to give to Marilla. Marilla at first refuses the money as she doesn’t want charity (she even told Rachel not to round up the town to help them). However, when Anne reads a note from Josephine that says “love is not charity” that Marilla accepts the money.

At the school concert, we see the children before their Christmas Carols as the collection tray is passed around for the Cuthberts. The carolers then make their way to Green Gables to give them a Christmas concert. Getting into the Christmas spirit, Jerry has made a Christmas star out of wood.

Later on, Marilla and Matthew tell Anne that the ad for boarders has worked and they will be welcoming two and the money made from that should help them keep Green Gables.

We then see the three of them and one of the new boarders. We see it is the bearded one but looking more cleaned up and asking about where is the second boarder. There is a knock at the door and we see it is the second thief. Anne tells him that he has indeed found Green Gables and season 1 ends there.

I was going to say that I did like this version of Anne of Green Gables. I understood some of the changes made to the book as it did flesh out the drama a bit more and even accepted that Gilbert’s story is different from the book. However with Walley-Beckett introducing these two thieves into Green Gables, this is what I fear in her wanting to make this version grittier: one of the men is going to rape Marilla and/or attempt to rape Anne. Walley-Beckett said she is adding stuff that is more between the lines in the novel but not in the novel. If Walley-Beckett decides to go that route with the show, I think she missed the mark of the novel and I will no longer watch the show.

Let’s hope that Jerry recognizes the two men as the ones that robbed him and beat him before anything bad can happen.