It is an end of an era for Hope-Zion as its ER shuts down, Maggie gets to emotionally involved with a patient that doesn’t end well, Charlie gets a new job and Alex gets a visitor from family.

Thomas is preparing to close the ER to turn into an urgent care facility at day’s end. Dev isn’t happy at the news and gets on Cassie’s case for getting cozy with Thomas.

One of the ER’s last patients is, a naked man, who calls himself Nude Dude. Nude Dude is a frequent customer with the police and he got beat up while he was being processed. Zach convinces him to put on a gown while he stitches him up. Zach notices a bite mark on Nude Dude’s knee and we find out he has lyme disease. Throughout, we see ER equipment being taken away with Dev trying to stop them. Zach seems resign to the ER becoming an urgent care facility but Nude Dude tries to get Zach to fight the closure. Unfortunately, it doesn’t work and the ER is shut down. Thomas tells Cassie that it is for the best because the hospital will save a lot of money which can then be used to save lives elsewhere.

One of Zach’s final acts as ER chief is to let Nude Dude go in all his naked glory with the meds he needs to treat his lyme disease. Zach also quits his job but we see in the previews for next week that he is still with Hope Zion.

Bree seems to be doing well and Maggie is with her ladies of their study finding out their progress. The ladies thank Maggie for being their champion. Alex arrives with test results of the ladies. For most ladies, the drugs are working but for Bree her spots have grown. Bree is upset at this news but then hunches over in pain. Bree has a bowel obstruction that Alex wants to remove surgically but Maggie wants to do a non-invasive procedure so Bree can still be on the clinical trial. The two are forced to go to Charlie who was voluntold by Thomas that he is the new Chief of Surgery. Charlie hears both arguments but sides with Maggie.

Alex asks if Charlie’s decision was personal but he says he made a medical decision and if she wants to do the surgery she should just do it.

It ends up that Bree does need the surgery or she would get sepsis. However, Maggie says gave Bree her next dose of blood thinners because she thought there was no surgery.

Later, Alex asks Maggie to make sure that Bree can handle the surgery despite being given blood thinners. Maggie assures Alex and also comforts Bree and says the two will go to that Kelly Clarkson concert. During the surgery, Bree starts to bleed out. The two stop the bleeding. During the surgery, Maggie blames herself for getting too involved and wishes she were like Alex during surgery, a doctor robot but she disagrees. Unfortunately, Bree ends up in a coma. We see Maggie sit by Bree’s bedside hoping for the best for the young lady.

His patient is Peter Stone, a man that keeps everyone laughing as he tells bad jokes, Peter has a broken elbow that needs surgery. During the surgery, Peter’s spirit appears telling jokes. Charlie tries to ignore him but when he starts repeating jokes, he thinks he knows what the issue is.

Peter does have the surgery and his spirit tells Charlie about how it was all gloomy until the levity came. Peter feels the levity slipping but Charlie says he doesn’t have to let it happen. Charlie gets Peter to say a joke but as he starts to say one, his spirit disappears. We don’t know the fate of Peter and if his humour disappeared or not.

Later, we see Charlie moving into Dawn’s office and Thomas is pleased that he has accepted the Chief of Surgery position. Charlie said he had forgotten that he enjoyed seeing the bigger picture of medicine when he had the job and he also took the job to watch over Thomas. 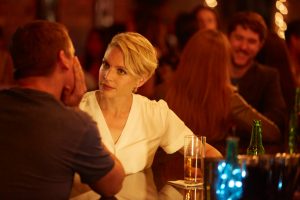 Charlie then goes to a bar to meet up with an old friend from college (Kristin Lehman). We don’t know her name but it is clear the two have history. The woman cracks a joke that gets Charlie to smile and we see the two later at her place making out and possibly leading to something more.

Alex is on a date with Manny and it looks like things might be progressing to an overnight stay when Alex gets alerted to her condo alarm going off. The two go to investigate and it is her mom Martha. Martha is there packing Charlie’s stuff so Alex can start over and is all innuendo around Manny. Their date is cut short but the two are all flirty the next morning at work. Smallville side note: How funny that Alex’s mother is called Martha when on Smallville, Lois’ mother figure/mother-in-law is also called Martha.

Next morning, Alex is reluctant to let her mom take Luke for the day. Martha assures her daughter that she has been clean and sober for two years. However, Martha ends up in the ER because she slipped and fell and dropped Luke. Shahis treats Luke and he is fine. Martha begs Shahir not to tell Alex or she would think that she was drunk when she dropped Luke. Shahir agrees as long as Martha brings Luke back if he starts to vomit. 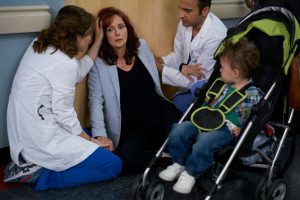 However, later Martha is seen wandering the halls of Hope-Zion speaking incoherently talking about her son Luke. Shahir sees her speaking nonsense but Alex sees her too and thinks she is drunk again. Shahir tries to tell Alex that he believes it is something else and Alex believes her when Martha collapses.

Shahir tells Alex that he needs to keep Martha overnight for testing to find out why she collapsed and why she has memory loss.

Later that night, Alex sits by her mom’s bedside. Martha wants Alex to go home and rest. We then see the two look at Pinterest boards for decorating ideas.

Later on, Manny drops by with Thai food (a joke from their date the night before). Alex talks about her day and Manny is their as an ear. Their is clear chemistry between the two. Alex calls it a night, Manny kisses her on the forehead and leaves.

So we see that Charlie has hooked up with an old college girlfriend that we see is sticking around for the next episode as she is investigating Maggie and Alex for what happened to Bree.