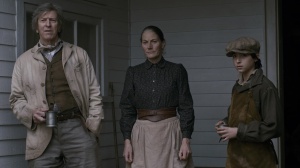 In the last episode, Anne decided not to return to school after all of the bullying she had to endure. We open up the episode with Anne living in in her imagination while Matthew and Marilla watching on with concern.

Marilla goes to Rachel for advice about what to do with Anne. Rachel advises Marilla to let Anne come to decision on her own to return to school. However, after Anne neglects to take the pie out thus almost burning down Green Gables, Marilla forces Anne to go back to school. Anne argues that she doesn’t want to go back and tells Marilla everyone hates her and she has no friends. Marilla points out that Diana is her friend but Anne tells her that Diana can’t overtly show her friendship in front of the other girls or she will get bullied. Anne also mentions how Gilbert’s sole purpose is to torment her. Of course, we know that isn’t true but that Gilbert likes her and we all know they eventually fall in love and get married. Anne also tells Marilla that Matthew told her that she doesn’t have to go back to school. Marilla pretty much forces Anne to go back to school and then goes to Matthew to tell him to leave the raising of Anne to her.

Back inside Green Gables, Anne’s loneliness and isolation is seen when she sees her reflection in the grandfather clock and talks to her imaginary friend Katie and hopes that she comes to Green Gables to be her friend.

The next morning, Anne does take off to school but as she approaches the school house, we know that she doesn’t go in. When Anne comes home, she pretends that she had a lovely day at school; Marilla and Matthew look relieve believing the crisis is over. When Anne takes off for school the next day, she lies to Marilla that they are going to learn about Saskatchewan and takes a book that Green Gables has on the history of England and Canada.

Anne’s jig is up when Diana and Ruby drop by Green Gables to give Anne her books and the basket she left behind. Diana mentions that she misses having Anne at school and wonders if Anne will ever return to school. Marilla doesn’t say anything but when Anne comes to school, isn’t pleased that she lied about going to school. Anne flees and cries.

So the minister is called in to tell Anne that lying is wrong and that honesty is the best policy. When it looks like Anne isn’t quite repentant for lying, the minister then tells her that she doesn’t have to return to school but to stay home and learn domestic chores to prepare her to become someone’s wife and that her purpose in life is to take care of her husband.

Anne is not happy at the minister’s words but seems pleased that she will get married as she feels that no one would want to marry her. Marilla also seems to be taken by the minister’s words as she reflects on the lost educational opportunity she could have had and snaps at Matthew for having to take care of him.

Everything comes to stop when there is a fire at the Gillis’. The whole town of Avonlea comes out to help battle the blaze. Diana is happy to see Anne but Anne notices that the windows and doors are still open in the house making it more difficult to put out the fire. Anne does an incredibly brave and stupid thing and enters the Gillis home to shut the doors of the house. Gilbert spies Anne closing the doors and calls out to her. Marilla finds out from Diana that Anne entered the home and wants to rush in after her but Rachel ahs to hold her back. Anne does make it back out and is praised a hero for slowing the fire down. Marilla wants to know how Anne knew what to do and she said that the orphanage had a fire safety manual that she read.

Jerry suggests to Anne that perhaps she should become a fire fighter. When this scene happened, I thought that the show might pair Anne with Jerry. I can be okay with certain changes to Anne of Green Gables but there is one thing that is sacred to me and that is the pairing of Gilbert and Anne. I think they were the very first couple that I ever shipped and plus it is canon (but I know that means crap these days in TV).

When Dawn breaks, we learn that the repairs will take a week and the Gillis’ will be billeted in different households. Ruby is going to stay with Anne and Marilla and Matthew. Ruby isn’t happy at the prospect because she doesn’t what others to think of her badly. Mrs. Gillis tells Ruby not to be ungrateful considering Anne saved their house. The Gillises are grateful to Anne for saving their house. Diana tells Ruby that it doesn’t matter what other people think but what she thinks. Diana tells Ruby that she thinks that Anne is marvelous and gives her a big hug. It was this that made me like this version of Diana and how finally she doesn’t bow to peer pressure.

Ruby is crying on her first day at Green Gables. Marilla forces them to rest after the night they had. While in bed, Ruby is still crying until Anne suggests they bake the men some biscuits and it would give Ruby an opportunity to feed Gilbert. Anne also mentions that to Ruby that she has no interest in Gilbert because of his slight to her. The prospect of feeding Gilbert perks Ruby up.

The next day, Anne and Ruby bring scones to the men. Billy Andrews is being a bullying ass to Anne and starts to ridicule Ruby after she trips and falls while gawking at Gilbert. Anne sticks up for Ruby and speaks back at Billy.

Gilbert comes down to make sure Ruby is okay and accepts the scones from the two. Gilbert is being attentive to Ruby but we see him give side glances to Anne who seems to look back at him too. We start to see the spark that I love between the two develop.

It seems that it was this moment that Anne and Ruby become friends (as I recall that they were always friends in the books/miniseries). We see this friendship continue to blossom with the Avonlea Story Club. It was a nice scene of friendship especially with Ruby accepting Anne as a friend.

We are on the final night that Ruby is staying over at Green Gables. Just before Ruby falls asleep, she tells Anne that she will miss her considering that she isn’t going to be at school. After Ruby falls asleep, Anne goes to see Marilla about a tough decision about whether or not to stay at home or go to school. Marilla lets her make that choice.

As Anne makes her way to school and enter the school house, she is warmly welcome by Ruby and Anne. Gilbert is pleased to see Anne too. Anne takes her place at her desk and it looks like she has finally found her place in this world.

Next week looks like we get the famous scene where Diana gets drunk on “raspberry cordial” and Matthew (I was about to write Jasper) decides to buy Anne the puff sleeve dress. That scene was absolutely one of my favourites in the miniseries.