We have a formation of another Saving Hope love triangle and I am very much annoyed. We have to thank the emotional storyline at the heart of the episode to thank for its beginnings.

Remember Bree? She was the young woman who got into a car accident with her fiancee Violet when they discovered that Bree had cancer. Violet couldn’t really deal and was going to leave her but ended up staying. However, in tonight’s episode, we learn from Bree that she kicked Violet out. Also, Bree isn’t doing too well with her chemotherapy treatments and has been getting sick to the point of vomiting in an Uber. After one treatment, Bree is about to go home alone but Maggie has found her a bed to stay in until she feels better (the on call room) and the two form a friendship.

The new CEO, Thomas, has called in Dawn to let her know about all of the cuts he has planned for Hope Zion that includes budget cuts to Zach’s ER, eliminating cardiac transplant surgeries and then trauma surgeries. Thomas orders Dawn to start prepping her cardiac patients for transfer to other hospitals.

Meanwhile, down in the ER, Zach tells his staff to be on their best to showcase how invaluable they are in hopes of getting some financing back. Unfortunately, Thomas happens to witness a man get his e-cigarette blow up in his face and a pack of dogs invade the ER.

Back to Dawn, she lets her patient, Sally and fellow War and Peace book club member that she is being transferred. Sally isn’t happy with the news as Dawn has been her surgeon for six years and thought they would see things to the end. Dawn apologizes and says her hands are tied.

However, when Dawn learns of Zach’s DOA construction worker that happens to be a match for Sally, she defies Thomas’ orders and performs the transplant surgery. Thomas is livid at Dawn and tells her that he expects her to resign the next day.

Dev and Cassie assist Dawn with the surgery and after some touch and go moments, Sally’s transplant is a success. Cassie then bursts into Thomas’ makeshift office to defend Dawn while he defends his position in trying to make Hope Zion sustainable.

We later see Dawn read War and Peace to a sleeping Sally as she recovers. As for Dawn’s job, we don’t know if it is safe or not.

Summer, Luke’s nanny brings the toddler to Charlie. Charlie wants to put Luke in the hospital’s day care so he has a chance to see him as he misses seeing his son. Unfortunately, Charlie didn’t tell Alex and when she finds out, she is mad at him and calls back Summer to take Luke back. The two get into an argument about Luke and Charlie’s inability to see his son because Alex keeps him at the condo, which he no longer lives at.

Alex can’t give this much thought as her patient, Colin Killbraith, a young boy in liver failure, needs a transplant as his body is rejection the current one. Alex asks if there is another relative who can donate part of their liver, Joan, Colin’s mother, reluctantly mentions his father, Danny. Unfortunately, Danny is in witness protection as he is about to be the star witness against a biker gang that he was a member of. 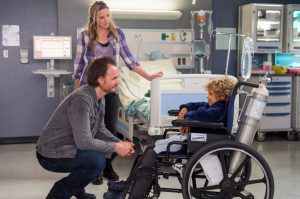 Word does get out to Danny about his son and he arrive at Hope Zion and grabs Alex in a storage closet. Danny tells Alex he wants to help but it has to remain anonymous and in fact believes he is in danger as someone probably tracked Joan’s calls to his police handler about Colin. Alex says she will help Danny but first needs to make sure he is a match. Alex eventually recruits Manny, who is on Colin’s surgical team and the two let Danny know that he is a match. However, Danny doesn’t want to do the surgery in an OR so Alex does a make shift one in the skills lab. Alex then lets Joan know about the anonymous donor but she knows that it is Danny. Joan agrees to it under one condition and that is Danny has to see Colin before the surgery. Father and son meet for the first time in years and it is touching. Colin gets Danny to promise to see him when he wakes up.

Greg Bryk as Danny and Michael Shanks as Charlie Harris

The surgery happens in the skills lab and Danny’s spirit visits Charlie. Danny notices a familiar guy roaming the halls of Hope Zion and gets Charlie to follow him. Danny sees it is a fellow bike gang member and knows he is in danger. Charlie visits Alex during her surgery to let her know that Danny is in danger and arranges for him to be moved to gerontology.

When Danny is recovering, Joan visits him and thanks him for saving their son. Danny hopes they can be a family again. After Joan leaves, Danny lets Manny know that he thinks that he still in danger. We see that it is true and Danny is rushed out of his room and we learn that he was poisoned by someone pretending to be a doctor changing his IV. Danny’s spirit tells Charlie that he is tired of running and his only regret that he won’t see Colin again. 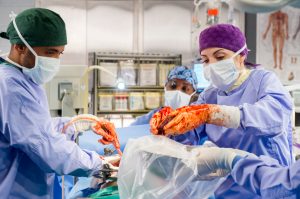 During Colin’s transplant surgery, Charlie lets Alex know that Danny has died. Danny’s spirit arrives and says goodbye to his son. Colin’s spirit appears and we get a tear-filled good bye between father and son. Both Danny’s and Colin’s spirit disappear. We then see Joan, all tear-filled over Danny’s death as she waits with her son as he recovers.

Outside at the hospital bay, Manny asks Alex how Charlie knew that Danny was in danger. Alex doesn’t want to talk about it and the way that Alex was looking at Manny we knew the inevitable was going to happen and she kisses him several times and he kisses her back. Blech! I don’t need this. Just put Charlie and Alex back together. I don’t need to see them fight. But on that note, Erica Durance can have chemistry with anybody but of course my favourite leading man of hers will always be Tom Welling.

Later on, Alex visits Charlie and agrees to put Luke in the hospital daycare so Charlie can see him more. We then see that Charlie was on the paternity.com website to either find information on how to get custody or finally put to rest who is Luke’s father.