Throughout the first 30 minutes of episode 3 of Anne I kept on repeating “Where is Gilbert?” This was the episode where Anne goes to school for the first time and we even see her pack the infamous slate that will come into play of their first meeting. 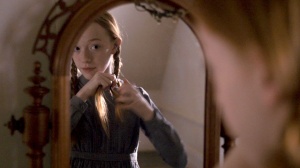 Anne is very nervous about going to school and the prospect of making new friends. When Anne gets to the school however, she encounters a quarter of mean girls. Actually there really is only one mean girl, Josie Pye, with the others (Jane Andrews, Ruby Gillis and Tilly Boulter) just following her. And to my sorrow, Diana Barry seems to be part of this group too. Anne does encounter some nice boys in Moody Spurgeon and Charlie Sloane. However, Billy Andrews is a bully and calls Anne a dog and continues to bark at her and treats like she is one. Diana was hoping that Gilbert would be at school on this day but alas he will be absent (hence my “Where is Gilbert?”). Like in the book and the 1985 miniseries, Diana calls Gilbert dreamy.

Diana takes Anne on a tour of the school grounds where we see the elementary school and the supply shed. Inside is Mr. Philips and Prissy Andrews getting real close. There is a lot of intimate touching and Anne tells Diana they are having intimate relations and Prissy has probably played with Mr. Philips’ pet mouse as that is what Mrs. Hammond did with Mr. Hammond and ended with twins. This show has definitely made Mr. Philips’ inappropriate interest in Prissy more overt than implied with the 1985 miniseries. During lunch hour, the Mean Girls and Diana want to hear more about what Anne saw in the supply room with Prissy and Mr. Philips. Anne talks about the pet mouse and Prissy touching Mr. Philips’. Anne also explains how she’s heard Mr. Hammond and Mrs. Hammond’s intimate relations that alternate between joyous and not so joyous. Josie and the others aren’t thrilled at hearing the filth that has come out of Anne’s mouth but she doesn’t realize what she has done wrong.

With the day over, Anne is happy it’s finished and promises to Diana that tomorrow is another day with no mistakes to it (Didn’t Miss Stacey say this to Anne in the 1985 miniseries).

When Anne comes home, she doesn’t tell Marilla or Matthew about her terrible at school but rather puts on a fake happy front.

The next day, Anne vows not to talk so much and hopes it will be a better day at school. On her way to school, Billy Andrews confronts Anne for the things she said about Prissy. Anne tries to apologize but Billy isn’t hearing it and just as it looks like he is going to beat her up in comes Gilbert (Lucas Jade Zumann) to the rescue.

Anne takes off with Gilbert in hot pursuit asking for her name. The two arrive at school where they finally introduce themselves. However, all eyes on the both of them with the Mean Girls shooting daggers at Anne. The boys are happy to see Gilbert back from a trip to Alberta with his father.

The Mean Girls confront Anne with an upset Ruby. Josie tells Anne that she shouldn’t have walked in with Gilbert as Ruby has had a crush on him for three years and she has dibs. Anne apologizes and she didn’t mean to walk in with Gilbert and promises not to talk to him.

During class, Mr. Philips has the students read out loud, when it comes to Anne’s turn, she gets all dramatic to the laughs of the other students except Diana who quietly applauds her performance. It is this scene that has made me realize how grating McNulty is as Anne. When Anne gets all melodramatic and overly chatty, I find it grating but when there are quiet moments, I think she is fine. Was Megan Follows grating as Anne in the 1985 miniseries? I don’t recall but maybe she was and I am just looking back on my childhood memories of the CBC miniseries with rose coloured glasses.

At lunch, Anne is eating alone. Gilbert comes and tries to give an apple to her from his orchard. Anne refuses to speak to him and storms off. During the math portion of the class, the moment I’ve been waiting for. Gilbert starts tossing stuff at Anne and walks over to her desk to give her the apple and then pulls her hair and calls her carrots. Anne smacks the slate on Gilbert’s face, cracking it. I was disappointed that Anne didn’t smash it like in 1985 and though Follows was a bit angrier at Gilbert than McNulty. Mr. Philips calls Anne to the front and writes her name without an E on the blackboard to say she has a very bad temper. Anne doesn’t stay at the front of the class for long and runs off.

Meanwhile, Marilla has been recruited by neighbourhood mothers to join the Progressive Mother group that involves feminism talk over tea and needlepoint. Rachel at first is shocked that Marilla would attend the group but Marilla says she is open to learning about different points of views. Rachel then supports her friend to say she will go to their next meeting. But the next meeting doesn’t happen for Marilla as Mrs. Bell uninvites her from the Progressive Mothers group for the rumours that Anne spread about Prissy. Marilla and Matthew are confused but Matthew gets the truth from Rachel. Marilla is appalled that Anne could say such things but Matthew is more sympathetic. Matthew explains that Anne was exposed to things no young girl should be and this becomes a light bulb moment for Marilla. Marilla goes to Mrs. Andrews to apologize for Anne but she doesn’t want to hear it and thinks Anne needs more discipline. When Marilla explains that Anne shouldn’t have said those things but they all need to understand that she has seen and heard things no girl should have and a progressive mom should have more forgiveness. Mrs. Andrews seems moved by Marilla’s words.

Anne arrives home and runs into Marilla’s arms crying saying she never wants to go back to school again. Marilla envelops her in a hug and understands what Anne is going through. I did like this scene as I’ve always loved the evolving relationship between Anne and Marilla to become true mother-daughter.

With Gilbert finally on the scene, I have to say Lucas Jade Zumann is no Jonathan Crombie, who was my first crush. Gibert is supposed to be the guy that every girl fawns over and don’t quite see it yet. It will be interesting to see Zumann and McNulty together going forward because my favourite thing about Anne of Green Gables has always been Anne and Gilbert and their relationship. I know the two are just kids so we can’t expect to see any romance between them unlike Follows and Crombie who were almost adults when they filmed the miniseries. If the show does last at least 5 seasons, we can see these two grow up before our eyes and romance can be a possibility kind of like on Road to Avonlea where we got see Felicity grow up and have a romance with Gus or Felix with Izzy.