The title of this episode could refer to the new CEO of Hope-Zion, Thomas Leferin (Arrow’s Joe Dinicol), who has come to town to observe the hospital.

Dawn, who is sporting bunny ears and bunny scrubs because of a lost bet to Dana, calls a meeting to all Hope-Zion staff to let people know of the new CEO arriving and that everyone should be on their best behaviour. 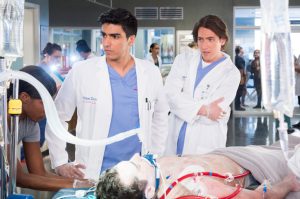 At this meeting, Dawn also introduces the newest intern, Dr. Billy Scott (Greg Calderone), who happens to be an old medical school friend of Dev and Cassie.

Billy is an arrogant SOB and Dev definitely can’t stand the guy which of course Zach tells him to show him around.

Their case is a frozen John Doe who has arrived in the ER. John Doe was found in a walk-in freezer. Dev, Cassie, Zach and Billy are working on warming John Doe up. When there is a cardiac event, Zach calls in Dawn.

While Zach is away, the John Doe is slowly warming up but still shows no vitals. Billy calls a time of death but Dev wants to wait for Zach to come back. Dawn arrives with Thomas to hear Billy proclaim a time of death while Dev is still working on saving John Doe’s life. 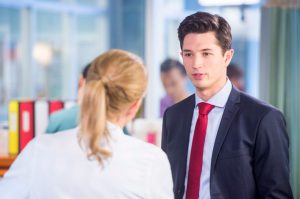 Dawn continues to work on John Doe and eventually brings him back to life. Dawn defends and praises the actions of her doctors to Thomas who wonders if her doctors like to freely proclaim time of deaths.

We learn the John Doe is Chad a York University student who drank too much and must have wandered into a freezer.

We also learn of Dev’s resentment towards Billy and that he cheated off him during a med school exam and was and still in unapologetic about it.

Charlie’s patient is Todd, a War of 1812 re-enactor who has come in to Hope-Zion because of a broken arm and abdominal pain after falling off his horse. At first Alex was assigned to the case but she passes Todd off to Maggie to deal with another medical case.

While in surgery, Maggie pretty much lets it slip that Alex didn’t want to be on the same case as Charlie. Nothing seems to go wrong with Todd’s surgery but Charlie sees his spirit in his War of 1812 character of Icarus Baltimore. Charlie tries to talk to him as Todd but he only responds as Icarus. Maggie tells Charlie about how Icarus died in the War of 1812 and how much Todd looks like him.

When Charlie meets Todd’s spirit again still in character, he notices he is limping. Finally, Charlie manages to get Todd back who tells him of a childhood injury due to a tuk tuk accident. Todd blames his leg injury for being anti-social and how he joined the re-enactment society to help.

Maggie and Charlie take a closer look at his injured leg and see that something is wrong and fix it. While Todd recovers, a friend of his from his re-enactment society comes for a visit and the two end up playing a game of Risk.

Charlie and Maggie note how glad that Todd has found someone he has connected with. Maggie asks if Charlie has plans later and he says that he does.

We see Charlie and Zach at a bar over drinks watching a boxing match. Earlier in the episode, Dawn asks Zach to ask Charlie out for a guy’s night out. 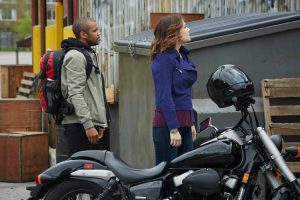 Alex sees Manny on his day off with a field kit and wonders what he is up to. Manny confesses that he is going to treat Mia, a 16-year old runaway, who is part of his youth group. Mia texted Manny to say she is in trouble and needs his help.

So the two hop on Alex’s newly acquired bike (don’t worry she only rides it once a week) to an abandoned warehouse where they mind Mia in the basement with a stab wound. Alex has to bring Mia to Hope-Zion but she worries this means her mom will be called. Alex tells Mia her mom won’t be called but she needs to go in.

Once in Hope-Zion, Mia gets worse that requires surgery. Dawn sees Alex wandering the halls of Hope-Zion and is surprised to see her after Maggie told her she was taking a mental day off. Dawn confronts Alex for her lies especially when she was seen earlier that day. Also, Dawn is mad at Alex for making it look like she doesn’t know where her staff is in front of the CEO.

When Alex asks for an OR for Mia, Dawn shuts her down and pulls her surgical privileges. Alex doesn’t agree with the decision but Dawn stands firm and tells her that she made her own rules and now she has to follow it.

Alex does follow her rules and goes through the surgery and asks Manny to distract Dawn. Manny does so just before Dawn can show Thomas the OR by faking a panic attack. Eventually, Dawn sees through Manny’s performance and demands to know what is going on.

Dawn then spies on Alex’s surgery from the gallery and she sees her save Mia’s life. Afterwards, Dawn is mad at Alex and did warns her that she would fire her for defying her. Dawn doesn’t because Alex did save Mia’s life. Dawn also wonders what is going with Alex as she doesn’t seem herself. Alex is sorry that Dawn doesn’t think she is herself but assures her that she is fine.

We later see Alex at the Hope-Zion parkade trying to take a selfie of her with her motorcycle. Manny comes along and takes the picture for her. Alex then asks why Manny left the seminary who tells her that he left because he couldn’t save his brother. There is talk about taking new journeys together and Manny asks if he can take it with Alex. The two then ride out of the parkade on Alex’s motorcycle.

I am not on board with Alex and Manny and hope the show doesn’t go there. It is clear that Manny likes Alex but we only have a finite amount of episode left for the show to bring her and Charlie together.