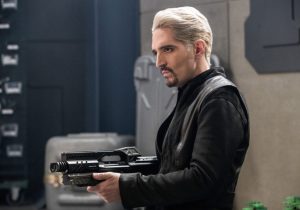 Meanwhile over at Jitters, Iris is showing off her engagement ring to Cecile and relates how Barry sang a song and then proposed. Cecile calls the proposal romantic and then asks if the couple wants to see Hamilton with her and Joe in July. All three are reluctant to commit knowing that Iris could potentially be dead at that point but Barry agrees to the date. Also, Hamilton is a thing no matter what multiverse you are from considering Alex had to procure tickets to the popular Broadway show on Earth-38.

Joe, Julian and Barry are called into the crime scene at Stagg Industries and are mystified. When Barry is alerted to another crime taking place at Kord Industries, he takes off as the Flash and meets up with Kadabra as he is making away with a piece of tech. Kadabra knows all about Barry and Iris’ fate as well as Savitar. Before Barry can grab him, Gypsy arrives also trying to grab him. But Kadabra performs a card trick and disappears.

Back at STAR Labs, Gypsy explains that Kadabra is from the 64th Century who came to her time on Earth-19 and also stole from tech companies there and also killed many people in the process. Kadabra has been enhanced with technology that gave him magical abilities. Gypsy and Cisco work together to try and locate Kadabra. Cisco also hopes to start something up with Gypsy. However Cisco discovers that Kadabra might have taken someone Gypsy loved back on Earth-19. 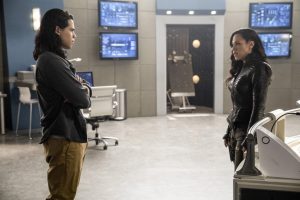 The two are alerted to Kadabra hitting up Mercury Labs but when the Flash gets there, he only encounters a hologram. In fact, Kadabra is at STAR Labs. Joe, Caitlin and Julian try and stop him but Kadabra turns Joe’s gun into a water gun. The three flee and are cornered in the lab. Caitlin alerts Barry who arrives and captures Kadabra. Kadabra tells Barry he knows who Savitar is and if he wants to know he will let him go because if he goes with Gypsy, he will get executed on Earth-19 thus sealing Iris’ fate.

Before Gypsy can get a chance to take Kadabra away, Barry puts him into the pipeline to ask him questions. Barry is tempted to let Kadabra go but Iris doesn’t think it is a good idea and that they will think of another way to save her life. But you know who is tempted? Joe. Joe opens the door to Kadabra’s pipeline cell and just when he is about to say who Savitar is, Gypsy arrives wondering what Joe is doing. This allows Kadabra to get away.

Kadabra makes his way to Wells’/Thawne’s time vault to steal a sphere. Just as he is about to leave, Joe confronts Kadabra but he creates an explosion that take him, Julian and Caitlin out. Unfortunately, Caitlin is impaled by a piece of scaffolding. 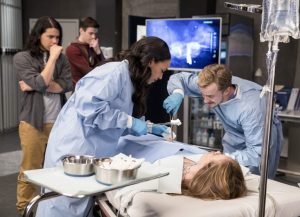 Caitlin is rushed to the infirmary. Caitlin has pieces of the scaffolding in her that is close to her kidneys. Caitlin talks Julian through the surgery. However, if Caitlin takes off her necklace and allow her cold powers to take over, she would be fine. Caitlin doesn’t want that and Julian manages to save Caitlin. While she recovers, Julian is at Caitlin’s bedside and is relieved when she wakes up. Julian tells Caitlin how brave she was and kisses her. It looks like the two are reconciled as earlier in the episode, Julian was giving Caitlin the cold shoulder despite her reaching out with an olive branch.

Meanwhile, Gypsy is mad at Joe for being reckless in letting Kadabra out but Cisco is more understanding of his reason’s why. Cisco then learns that one of Kadabra’s victims was Gypsy’s partner in life and work. 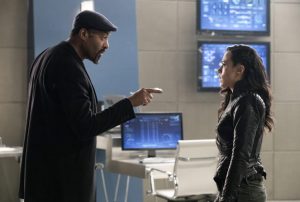 Team Flash then realize that all the tech that Kadabra stole was to build a time machine. So Flash, Gypsy, Vibe and Kid Flash decide to stop Kadabra before he can go through a portal. One of the streets that Iris mentions is an actual street in downtown Vancouver, which is Thurlow. Eventually, Barry grabs Kadabra before he can go through the portal but his time ship does sail through.

Now in the custody of Gypsy, Barry lets Kadabra go with her. Before Kadabra goes, Barry begs the goodness in Kadabra to say who Savitar is. Kadabra doesn’t answer Barry but to simply say they are enemies and mentions the others Barry faced like Thawne, Zoom and a name we have heard before Deveaux (or at least I don’t remember). Kadabra and Gypsy go through the portal back to Earth-19 and her relationship with Cisco remains a question mark.

At the West’s, Joe is ashamed for what he did but Iris is understanding of the reason why her dad did what he did. Barry then tells the two how they can stop Savitar and that is by traveling to the future.

In the coda, Caitlin is recovering and complaining to Cisco at being offered lime jello. HR comes back from wherever he was just in time to see that Caitlin starts to crash. Julian, Cisco and HR work hard to save Caitlin’s life but she flat lines. Julian refuses to believe that Caitlin is dead and pulls off her necklace against Cisco’s protestations. Caitlin’s heart starts beating and her injury has healed.

Unfortunately for the men, Caitlin has gone all Killer Frost and blows them away.

So another future headline is coming true.

The Flash is off for a month but when we come back we are going to the future.