I am not sure how much of Anne will cover Anne of Green Gables in its first season as it looks like it really is taking its time getting through it. Episode 2 mostly takes place with Jasper Matthew chasing after Anne to bring her back to Avonlea and Green Gables. 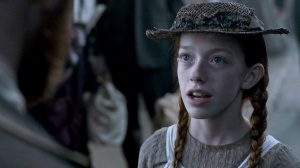 Matthew misses the train to Charlottetown that had Anne on it. Matthew needs a horse as his is pooped and manages to hitch a ride from a vegetable farmer. Meanwhile at the Charlottetown train station, some creep claims to know Anne and is there to take her to her family. Annie one smart cookie and knows he is not who he says he is and breaks away from him. The man gives a brief chase but gives up and turns his attention on two young boys.

Eventually, Anne makes it on the ferry to Halifax and then onto the orphanage. Anne can’t bring herself to go in as bad memories of being bullied by the girls there haunt her. Anne decides to spend night outside of the orphanage. When dawn breaks, Anne charms a milkman into giving her a lift to the Halifax train station. The milkman, Mr. Avery, agrees after Anne offers to help his deliveries. Throughout the trip, Anne spins yarns for Mr. Avery and he takes it all in.

Meanwhile, once in Charlottetown, Matthew sells his pocket watch for ferry and train tickets for he and Anne. Matthew thinks he sees Anne and as he tries to reach her, he gets knocked by a bike and into an on coming carriage. Matthew is knocked out and sustains a head injury. When Matthew wakes up, he goes against medical advice and goes on his way to find Anne in Halifax.

When Matthew makes it to the orphanage, night has fallen and no one answers his knocks at the door. In the morning, a housekeeper lets Matthew in where he discovers that Anne isn’t there. Matthew encounters Avery the milkman and learns from him where Anne is.

Anne is at the train station earning money by reciting poems for waiting passengers. Matthew sees her and calls out her name. Anne continues reciting her poem as he continues to call out to her. Once Matthew reaches her, Anne isn’t interested in hearing what he has to say as she believes she will be sent away again on their whim. They argument gets heated to a point where a passenger is about to step in to help Anne out. It is only when Matthew calls Anne his daughter that she gives him a big hug and the two go back to Green Gables.

Back at Green Gables, while awaiting Anne and Matthew, Marilla is frantic with worry that she is about to ride off to Charlottetown to find them. Rachel has to stop Marilla from going off in a panic.

When Anne and Matthew returns, Marilla doesn’t apologize but treats Anne as before she left. Anne doesn’t quite understand Marilla’s behaviour towards her. Now that Anne is back, her friendship with Diana does deepen.

However, just when we think things are getting better for Anne, she meets with some hostility at the church picnic where we hear the residents of Avonlea talk despairingly about Anne. Even Diana’s parents are wary of their daughter hanging out with an orphan and stop her from going to Anne when she arrives. Anne sees this is hurt and further hurt as the townspeople words get to her. Anne takes off and Marilla goes after her.

One Marilla catches up to her, she apologizes to Anne for not believing her when she said she didn’t steal the broach. Marilla feels even worse that she bullied Anne into lying. Marilla asks for Anne’s forgiveness that she does give.

In a touching scene that I don’t think is in the book nor was it depicted in the 1985 miniseries was Marilla and Matthew asking Anne to take on the Cuthbert name (so she will be known as Anne Shirley-Cuthbert). Anne is touched and when she goes to sign her name in the Cuthbert family bible, she does as Anne does and makes way more dramatic than it should have been.

Looks like next week we finally get Gilbert and the famous “carrots” scene.

As I mentioned off the top, the show is taking its time with the novel and I am not sure if I like this pacing. I am going to watch all the episodes but something tells me we won’t be getting Matthew [SPOILER ALERT] dying of a heart attack by season’s end. It will be interesting to see at what point in the novel does the first season end.

3 Comments on Anne Episode 2 “I Am No Bird, and No Net Ensnares Me” Recap