Relationships are tested for two couples in this week’s episode. While two come out better the other remains in limbo.

My current favourite couple on TV, Mon-el and Kara, are having a nice night in, eating ice-cream, watching Game of Thrones and is about to put on a movie musical and getting all kinds of romantic. But the moment is interrupted by a blurry message on their TV screen from Teri Hatcher’s character seeking Mon-el.

At the DEO, J’onn lets them know of a cruiser orbiting National City’s skyline. Mon-el doesn’t recognize it so Kara goes up to take a look. The ship goes all hostile and fires on Kara who gets trapped in a bubble that she eventually overcomes. The ship prepares to fire again on Kara when Mon-el calls out to the ship to give himself up.

Before Mon-el leaves for the ship, he assures Kara that he is going to be fine and gives her a kiss. Just before Mon-el gets beamed up, Kara runs into his embrace and both are sent to the ship.

Once on board Kara realizes the truth about her boyfriend when she meets the King and Queen of Daxam, Lar-gand and Rhea. And the monarchs are also Mon-el parents meaning that he is the Prince of Daxam, the one that Kara called a real piece of work in a previous episode. 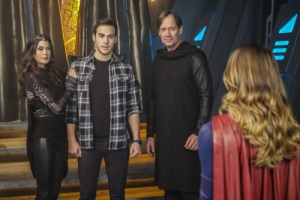 At an awkward family dinner, Rhea goes on about how bad Krypton is while Kara outlines all the atrocities that Daxam has done. Mon-el wants to know how his parents found him because he thought they were dead. Rhea and Lar-gan explain that they heard his beacon and it brought them to Slaver’s Moon where one of their Dominator ambassords told them of Mon-el’s heroics. Kara then wants to know the true story of how he escaped Daxam.

Mon-el tells the truth of how he was selfishly led to safety by one of his guard disregarding cries for help and killing a Kryptonian.

Kara is disgusted at Mon-el for lying to her and the two head back to Earth.

Meanwhile, Winn’s new girlfriend Lyra has framed him for an art heist. It seems their night time tryst at the National City Art Gallery was a ruse to steal Van Gogh’s Starry Night painting. Maggie calls Winn in to the precinct and shows video surveillance footage of Winn at the art gallery but no Lyra. It seems that Valerians can’t be seen on security cameras and photos. Winn calls in Alex and James to help him. Maggie gives the three 24 hours to clear up James’ name.

During their investigation, it looks like Lyra has conned past beaux to frame while she stole art work in other cities like Metropolis. The trio find Lyra at a trailer park. Winn wants Lyra to say to his face that he was just a mark and didn’t care for him at all. Lyra does so and Winn leaves. Winn is then confronted by an alien gang intent on killing him but Guardian and Alex come to help. The gang gets away and Lyra tells the three that they’ve ruined everything.

In custody, Lyra tells Winn that she stole the painting to help clear the debts of her younger brother Bastien. It looks like Lyra was going to sell the painting to Mandrix, an intergalactic art dealer. J’onn thinks that Lyra is still playing Winn but he believes her and lets her go so the two of them can rescue her brother. At the warehouse, Winn gives the painting to Mandrix and Lyra sees her brother. Things start to go south when Mandrix realizes the painting is a fake and a fight breaks out. The Guardian arrives and takes on Mandrix. Eventually the DEO arrives and Mandrix and the alien gang are taken into custody. Lyra is reunited with her brother, Maggie gets the painting back and Winn has cleared his name within the 24 hour window. At the DEO, Lyra tells Winn that she and Bastien are thinking of leaving town as there is nothing left but Win says that she has him and the two reconcile. 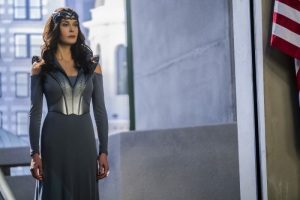 As all of that is going on, Kara gets a visit from Rhea who wants her to talk to Mon-el and convince him to return to Daxam and help it restore to glory and help her make it great again.

Mon-el is trying to get back into Kara’s good graces and wants to know what he can do to make things better between them. Kara has no answers but delivers Rhea’s message to Mon-el.

Later, Mon-el and Kara finally have the talk. Mon-el tells the truth about how he was a selfish person back on Daxam but being on Earth has changed him and being with Kara has changed him too. He loves being a hero because he gets to do so by Kara’s side and that he loves her.

I am not doing Mon-el’s speech justice, so TV Line has thankfully transcribed it in their recap:

“My name is Mon-El. I’m the former Prince of Daxam. And I was a spoiled, useless person, but I didn’t know until I met you. I love being a hero because it means I get to spend every single day by your side. I love the way you’re honest to a fault. And the way that you fight for those you care for. And I love you. With everything that I have, I love you. You’re so special. … I’m sorry for [lying to you.] You’re right, I’m a liar, and I really hope you can still see the good in me. Please.”

Kara is unmoved and wonders if Mon-el was ever going to tell her the truth and he honestly says he doesn’t know. Kara then breaks up with Mon-el.

Mon-el goes on board his parents ship to tell them he isn’t going back to Daxam with them and doesn’t want to be the person he was. Mon-el tries to get his parents to see how they weren’t good to their people btu they seem unmoved but do let their son return to Earth.

Back at the DEO, Winn gives Kara back the interdimensional portal device that Cisco developed after examining it. Winn notes how he and Cisco would be BFFs if they existed in the same universe. Kara tells Winn she could use an interdimenstional vacation.

Their talk is interrupted by J’onn who introduces the team to a new villain (Darren Criss) being brought into custody. This villain who we know as the Music Meister is happy to see Kara as that is who he wanted to meet when he allowed the DEO to capture him. The Music Meister hypnotizes Kara into a coma, takes the interdimensional portal device to open one to Earth-1 to go after the Fastest Man Alive aka the Flash aka Barry Allen. As the Music Meister leaves through the portal, Winn grabs the interdimenstional portal clicker.

Before Kara can collapse to the ground, Mon-el catches her.

When Kara “wakes” up, she is no longer in National City but in some 1940s nightclub being shoved on stage ready to perform as the opening act….and to be continued on The Flash.

Let’s hope Kara’s musical trip with Barry helps her patch things up with Mon-el because I really do love those two together.

And on another note, I know I initially said that I wasn’t so sure about Melissa Benoist as Kara/Supergirl because how I associated with her as Marley from Glee and I was pretty indifferent to her character. Now after almost two seasons, I really do love Benoist as Kara.