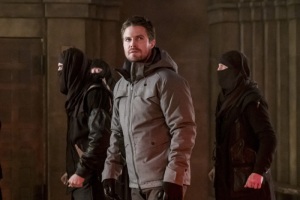 Things are looking good for Oliver as he finds who he thought was a trusted friend in fact turns out to be the one that has been tormenting him all season. Oliver discovers that Adrian Chase is Prometheus from Talia. Oliver pays Talia a visit in her Nanda Parbat lite facility and confronts her on why she would train Prometheus. Talia tells him it is because Oliver killed her father and reveals her full-name: Talia Al Ghul. Before Oliver leaves, Talia does tell him that Prometheus goes by Adrian Chase.

Once back in Star City, Oliver interrupts Adrian during a meeting and he realizes that his boss knows the truth. When Adrian refuses to meet Oliver in his office, he decides to confront the DA in his Green Arrow guise. Adrian is unfazed and tells Oliver that he has captured Susan Williams and if he dies she dies. Oliver has to let Adrian go but he updates Team Arrow on Prometheus’ true identity.

Everyone feel betrayed. Quentin and Rene have a tense encounter with Adrian at the City Hall office and are forced to pretend that things are all normal. The team is tasked at finding where Adrian is holding Susan but Felicity is MIA as she is busy with Helix and visiting their HQ.

To find out where Adrian might possibly have Susan and to gain some leverage against him, Curtis and Dinah head to Coast City to get Adrian’s mom. However, when the two get there, the house is empty and she is nowhere to be found. Curtis releases his T-spheres to search the place and the two hear some screams. They run upstairs and in one of the bedrooms is a TV where on-screen is Prometheus torturing Susan in an unknown location.

There is a lead where blueprints of Adrian’s home indicates there is a basement. While they don’t think that Adrian would be that stupid to hold Susan in his own home, Oliver and Diggle check it out anyways. The two separate to search the home and Oliver comes across Adrian’s wife, Doris. As the Green Arrow, he tells Doris that he husband is the throwing star killer but she doesn’t believe him and the SCPD arrive to try and take in the Green Arrow. Diggle and Oliver get away and they realize that Adrian is always 10 steps ahead of them (as he said to him earlier). Oliver then has to hold a press conference as the mayor denouncing the Green Arrow’s attack on the DA’s home and wife. 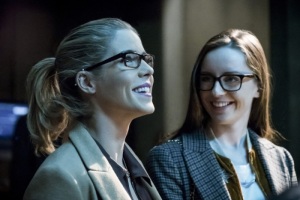 When Felicity finally does show up to the Arrow Cave, she takes the video footage of Susan to Helix to see if they can use their resources to locate her. However, Alena (screen name: Kojo Sledgehammer) tells her that Felicity needs to do something for them first and that is hack into a Homeland Security drone. Felicity does do that and finds Susan’s location and it is an abandoned building. Felicity finds 12 heat signatures but it is unknown which one is Susan’s. The team splits up and Rene and Dinah discover that the heat signatures are bombs designed to go off when doors are open. Rene and Dinah are trapped when one of the bombs goes off but Curtis gets them out.

Oliver does find Susan and tells her to run as Adrian is finished with her. Oliver and Adrian have their face-off. Adrian starts to ridicule Oliver but he gets the smug look on his face when Diggle brings Doris. Doris is horrified to learn that her husband is the throwing star killer and tries to talk him out of his revenge scheme. Adrian tells his wife that he can’t. Doris is still trying to convince him otherwise. The two embrace and you can see that Adrian is going to kill his wife a mile away. As soon as Adrian stabs his wife, Diggle tries to get Doris some help but she dies on the way to the hospital.

Oliver is ready to kill Adrian but Adrian keeps on telling him that he won’t kill him. Oliver then gets taken out by Talia and both are now him hostage in a unknown location and for unknown reasons. Felicity goes to Helix to uses their resources to help find Oliver and at the same time serving their needs.

When Quentin brings Susan to the SCPD for a statement, the encounter Adrian. Quentin threatens Adrian but he tells him that he should be more sympathetic considering he is in mourning since the Green Arrow killed his wife.

Meanwhile in Russia flashback land, this can be summarized as Oliver using his season 1 Green Arrow guise to take out Gregor.