We are in Chicago 1927 and Damien Darhk, Reverse-Flash and Malcolm Merlyn offer their services to Al Capone to help improve his empire. After seeing the Reverse-Flash in action, Capone agrees to their help.

Meanwhile, Jax is trying to get Martin to tell the team about Lily because if they find out he created a time aberration, they won’t be happy. Martin thinks he can get away with it as long as Lily’s existence does not impact history

We see that there is some sibling rivalry between Ray and Nate as the two compete to see who pretends to be Ness in order to complete his mission of stealing Capone’s ledger that takes him down. Without the ledger, Capone become mayor of Chicago.

Rory refuses to go on the mission so Sara orders him to stay behind and keep an eye on Ness who has brain damage from being in the water and Gideon is reversing his condition. Amaya stays to babysit him. While on the Wavrider, Rory sees Snart who chides him taking orders and is here to remind him who he is.

At the Chelsea Club, things go wrong when Darhk shows up and Thawne grabs Sara and Martin when Nate as Ness and Ray as Bobby De Niro arrive with the FBI in their raid. Jax tells the two what happened.

On the Waverider, Jax finds a weapon to stop the speedster while Ray wants to take over the mission but doesn’t have a plan. Mick takes charge and says the only way to beat Capone is to think like a criminal.

At Capone’s HQ, Malcolm visits Sara and Martin. Malcolm offers Sara the chance to get 9 years of her life back and tells her how he was the one that ook down the Queen’s Gambit. Malcolm can take Sara back to before that time in exchange for the amulet. Sara refuses and says the life she could have had wasn’t her. Martin is impressed and Sara says he was the one that gave her the resolve not to mess with time. Martin then admits about having a daughter and remembering everything about her. Sara isn’t happy and thinks Martin is a hypcrocrite for convincing her not to mess with time by wanting to kill Darhk.

Darhk comes and takes Martin to be tortured by a device Thawne invented. If you recall, Thawne used this device to steal Harrison Wells’ identity, killing him in the process. The device has been modified to only cause Martin pain.

Mick and Amaya carjack one of Capone’s cars as Bonnie and Clyde. At Capone’s HQ, Nate finds the ledger, Amaya finds Sara and the two save Martin. Snart visits Mick again and encourages him to flee but Mick plays the hero and everyone escapes but again all part of the Legion of Doom’s plan.

Back on the Waverider, Snart visits Mick again after seeing a warm moment pass between him and Amaya. Snart says that sacrificing oneself for friends isn’t what it is cracked up to be. It sees that the Snart in Mick’s head is trying to tell him to ditch the Legends. 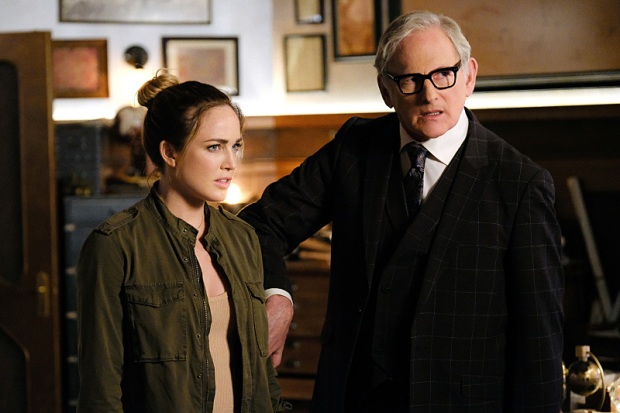 Jax notes that Martin is acting weird when he goes off to research the amulet and when he sees Martin speeding around he knows that Thawne has disguised himself as Martin. Thanks to the speedster gun, Jax manages to temporarily stop Thawne. Thawne then starts to strangle Jax but Ray emerges to knock down Thawne who speeds away to the bridge and open the cargo door to let him Malcolm and Capone’s men to kill everyone aboard.

With the Waverider being overrun, Nate and Ray help Sara take out Capone’s men while Sara takes on Malcolm and is about to kill him when he reveals he knows where Martin is and that information comes at a price.

Meanwhile, Mick and Amaya take on Thawne. Thanks to the speedster gun, Amaya has a fighting chance against Thawne but eventually he gets the upper hand and remembers her and her association with Rex Tyler. Thawne is about to kill Amaya like he killed Rex but gets an alert on his phone and speeds away.

Martin is about to be swimming with the fishes when Sara rescues him. Sara tells Martin that she got his location from Malcolm in exchange for the amulet. On the Waverider, Sara explains her reasoning and that she thinks of the team as her family and she is willing to do anything to protect her family and that includes keeping Lily in the timeline.

In the Waverider kitchen, Amaya gifts Mick with whiskey she stole from Capone and gives him a kiss on the cheek.Snart appears and continues to taunt him for staying with the Legends. And I love Dominic Purcell on this show; he is the comic relief as I laughed so much at all his quips in this episode.

Meawnhile, Nate and Ray explain what happened to a recovered Ness and give him the ledger and he can’t quite believe that Capone will get taken down because of tax evasion.

And the Legion of Doom convene again and Thawne puts the together both pieces of the amulet and a star chart appears. Thawn talks about  the Spear of Destiny that can re-write reality and the key to finding it is Rip Hunter. We then go to 1967 Los Angeles and we are on a film set of some sort of sci-fi film that features the character of Rip Hunter. The director yells cut and we see that it is Rip himself sporting an American accent and some very bad polyester threads.

We are on a break until 2017 with lots of questions. Is Snart going to be a vision to Mick going forward? Will Mick and Amaya continue to grow closer? Does this Spear of Destiny be a reason why Laurel comes back to life over on Arrow? And what is with Rip? Is this where he landed after the season premiere and now has amnesia. Can’t wait to find out.