Cosima gets a scientific breakthrough, S seeks revenge against Duko while Donnie finds life in the clink pretty tough.

Ira is examining Rachel’s eye after she confides in him of seeing a swan. Ira thinks Rachel’s vision has to do with hitting her head after falling but she insists she knows what she saw and believes she is glitching. Rachel proposes that she and Ira work together to convince Susan to fight for their survival. Ira notes that Rachel is able to walk without her crutches and her aphasia is gone. Later, when Rachel is alone in her room, she sees the swan again but her vision now includes an old bearded man.

In Susan’s lab, Rachel wants to help Susan regain control of Neolution from Evie Cho and wants to go back to help Sarah and the clone sisters with that task. While talking to Susan, Rachel sees the swan again but also sees images of a swan head too. 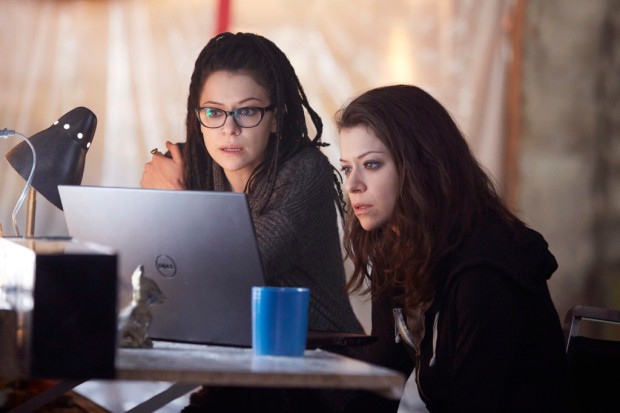 Through Kira, MK contacts Sarah who loops in Cosima. MK informs the two that she has found Susan on a remote northern island and also shows them the Skype conversation that she has with Evie Cho. Sarah and Cosima see Evie ousting Susan as head of Neolution and that they are coming after the clone aware sestras.

Later on, using an encrypted line, MK puts Cosima in contact with Susan. Cosima needs Susan’s help in finding a cure for her condition and shares whatever research she and Scott have left with her. Susan, Ira and Rachel look over the research but Cosima and Scott refuse to work with Rachel and Ira so Susan kicks them out of her lab.

Susan, Cosima and Scott bounce off ideas of possible ways to go when Cosima has a eureka moment. Cosima wants to fertilize a Leda egg with a Castor clone. And the subjects are Sarah and Ira. Sarah reluctantly agrees to donate her eggs to Cosima while Ira is happy to contribute. We then see Cosima fly via helicopter to the Island of Doctor Moreau while Scott is worried about her safety in working with Susan but knows it is for the best if it means there is a cure.

We open up the episode with Donnie in the mess hall. Donnie has just sat down to eat his dinner when a fellow prisoner asks what he is in prison for. Donnie explains it was for pushing prescription pills and starts to list off his accomplishments in this field. The prisoner then introduces Donnie to another prisoner (Noah Danby) who reveals himself to be a Neolutionist sent to keep an eye on him while showing his Neolution tattoo on his hand. I am going to call this prisoner Kane because the actor who plays him played the werewolf Kane on Bitten.

Alison and Felix are going to visit Donnie and she wonders if asking Adele to be his lawyer is such a good idea. Adele arrives smelling of alcohol but seems to show her worth as a lawyer. However, Alison is concerned about letting Adele in who is unaware of clones. Felix does introduce Alison to Adele as Sarah’s twin sister, a story she seems to accept.

While talking to Donnie, Adele explains what he should do and not do while on the inside. During the visit Kane arrives and when Donnie gets to speak to Alison alone, tells her Kane is with Neolution and knows he won’t survive two days in jail while awaiting his bail hearing. Alison knows who is behind the setup: Duko.

Meanwhile, Kira informs Sarah that S. has taken off with her gun. Sarah knows that S is going after Duko and is afraid that is going to do something rash. Sarah reaches out to Art and both agree that killing a cop is a bad idea. S has followed Duko in an out of the way area. S has loaded up her rifle and is ready to take the shot when she sees Alison approach. S. calls Sarah to inform her what she saw.

Alison gets into Duko’s car and wants to know what he wants. Duko simply wants to know where Sarah is. Alison denies knowing her location but Duko’s threat against Donnie looms.

Later, Alison arrives at the church to rehearse her musical review with Sarah Stubbs. When she drops some of her props and costumes, the pastor reaches out to help and Alison confides in him her conflict. Should Alison betray someone she loves to help a loved one?

Sarah and S enlist Felix to go to Alison to see whether or not she will betray them. Alison calls and asks Felix to come to the church. When Felix arrives we are unsure if Alison will betray everyone. Duko is also at the church and Alison so leaevs Felix to meet him. Alison then receives a call and it is Donnie. Kane threatens to kill Donnie with a shiv unless she tells Duko where Sarah is. Alison tells Duko that Sarah will be at the comic book shop that night. Duko says he will call off Kane once he confirms her intel.

Meanwhile, MK calls Sarah to give her all the information she has found on Duko. We then see MK has the same illness that Cosima has.

Duko calls off Kane and Felix lets Alison know that Donnie is safe. This lets Alison get fully into her performance that it ends on a strong note.

Back at the comic book shop, Duko pleads with Art to help him but Art tells him he is on his own. Sarah and Art leave so S can have a crack at him. S. hooks up a battery to Duko’s chair and proceeds to torture him. S. learns from Duko that Evie Cho plans on using the bots on a wider audience under the guise of gene therapy but he doesn’t know the true reason. Duko offers to work for S but she doesn’t entertain the offer. S throws all of Duko’s shady dealing with Brightborn in his face. Duko says he worked for them because they threatened his 10-year-old niece and he is all she has. Duko is using the money to help his niece. But S. wants vengeance for her mother and shoots him dead.

Next week, we get the return of Helena and I don’t know how Felix is going to explain her to Adele!