It is the penultimate episode of Arrow’s fourth season and lots went down before we head towards the ultimate showdown between Damien Darhk and Team Arrow all in the name of saving the world.

What happened on the island is that Taiana has now been imbued with the power of the idol. Taiana gets shot several times by one of Rieter’s men and after Oliver kills them, she absorbs their life powers and knows why Rieter was after the idol. When one of the prisoners is dying, Oliver wants to save him and on the plane but Taiana says he is a lame duck and wants to kill him so she can get his life force. Taiana wants to use her new found powers to stop a despot back home in Russia. Oliver takes the idol and knows Taiana won’t kill him but Rieter says he would. Taiana stands beside Oliver and shows Rieter that she has the same powers of him.

I don’t really understand the point of this season’s flashbacks other than to note the idol is the same as Darhk’s. And since we are going to be entering season 5, we should see island Oliver as we are nearing the time of him being rescued to season 1.

Thea is taken prisoner by Malcolm but before hand, she manages to get a text out to Felicity, who alerts Oliver and Diggle where the message originated from, which is in the Glades. When Oliver and Diggle arrive at the location, they see that it is just an empty street. Lance asks the two if they see anything unusual in the area. Oliver sees a sewage cover and he and Diggle enter. When they emerge, they are in a suburban cul-de-sac and it is broad daylight.

Also there is Ruve, who has arrived at the Ark to deal with the Anarky situation. When Ruve is alerted that the Green Arrow and Spartan are in the Ark, she orders Malcolm to deal with them.

Oliver and Diggle split up. Oliver finds Thea tied to a chair in the house she was vacationing in with Alex. Before hand to get Thea to comply, we know that Malcolm gave her one of the yellow pills. Because of that, when Oliver frees Thea, she immediately kicks him away and holds a gun on him. Malcolm arrives and pontificates but luckily Diggle arrives. Malcolm and Thea gets away.

Ruve uses the Arks community TV station to announce that intruders are in the Ark and all should help capture them.

Oliver and Diggle manage to get rid of the Hive soldiers by breaking into the basement of one of the houses. Unfortunately, the family arrives. The Green Arrow tries to assure they mean no harm but the father (John Murphy) tries to alert the soldiers outside but the Green Arrow silences him. Oliver believes this family is under mind control just like Thea but the father said that he has never taken the pill. The father believes that Damien Darhk will save them after receiving some many empty promises from other who claimed to do the same. Oliver realizes that what the man said has some truth to it. When Hive soldiers arrive, the Green Arrow sends the family to safety. The Green Arrow goes to find Thea while Diggle will hold off the Ghosts.

It is archer versus archer and Oliver does manage to get Thea to break free from the mind control. With the Ghosts down, Malcolm is there too. But Anarky uses the community TV station to give a message to Darhk that involves threatening to kill Darhk’s wife and daughter.

So Oliver orders Malcolm to bring the residents of the Ark back to safety while he, Diggle and Thea go after Anarky.

They go to the Ark’s hub and Anarky warns them that one missed shot will cause the Ark to collapse. Unfortunately, a stray arrow hits a gas tank and things starts to explode around them. In the chaos, Anarky fatally stabs Ruve. As the hub starts to collapse, Diggle grabs Darhk’s daughter. And as Ruve lays dying, Oliver promises to save her daughter. Everyone makes it out of the Ark.

When Malcolm reports back to Damien, he doesn’t say he was involved with rescuing people of the Ark but he did state that Ruve has died and blames everything on Anarky. 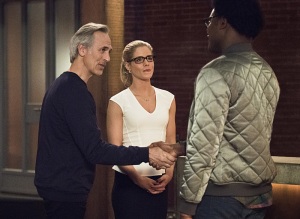 Felicity has called in Curtis to help her and her father take down Rubicon for good. Donna freaks out that Noah is helping Felicity. Noah explains that it is to save the world after what happened to Havenrock. While tragic, Donna doesn’t understand what happened in Havenrock should concern Felicity and Noah. Felicity has to explain to her mom that she has been working for the Green Arrow for the last three years.

Meanwhile, Darhk has enlisted Felicity’s ex, Cooper Seldon, to combat her hacks. Cooper manages to take over Felicity’s systems but she, Noah and Curtis fight back by overloading Rubicon with too many access requests where it shuts down and electro shocks Cooper away.

We interrupt this part of the recap for ….

While all the hacking is going on Donna and Noah are snipping at each other. Donna isn’t happy at all that her ex has re-entered their daughter’s lives. Each puts the other down and the final straw to this is when Felicity calls Noah dad after he says how proud he is of her in defeating Rubicon. Donna goes upstairs to fold laundry and explains to Felicity that Noah didn’t abandon them but took her away from him. Donna just knew that Noah wouldn’t change his criminal ways and wanted to protect Felicity from heartache. Felicity understands and mother-daughter share a nice moment.

With the world safe, Donna asks Noah to leave them once more so he can’t hurt Felicity again as she knows he will. Noah believes that Felicity will be devastated if he leaves again but Donna knows that she will get over it as she is one tough cookie. So Noah does leave.

When everything is said and done, Curtis notes that Felicity and Oliver’s relationship is somewhat similar to her parents and pretty such telling her to give him another chance.

Despite Rubicon being shut down, Darhk still wants to get it up and running again despite the fact that he has no where safe to go. So Darhk pays Felicity a visit seeking her help. When Felicity tells Darhk to go to hell, he says that he will by bringing it to them.

So what will happen in the finale?