After losing Laurel Lance and thereby Katie Cassidy over on Arrow a few weeks ago, it was nice to see her back on screen again on The Flash but as her Earth-2 doppleganger the Black Siren.

Before that we open the episode up with the Earth-2 meta humans wrecking havoc on Central City. Some of these metahumans that we see (and I am only guessing here) Earth-2 versions of Hawkman and Hawkgirl and Earth-2 Green Lantern. Captain Singh is attacked by the Green Lantern one and Joe is trying to get him to safety but more metahumans are attacking their getaway car. Luckily, the Flash has cleaned up the meta humans on the scene.

When Barry returns to STAR Labs, he sees that Caitlin has returns. Henry checks her over and says that Caitlin will be fine. It seems that Zoom let her go and was told that Barry was dead. Barry assures his friend that he is very much alive and they can stop Zoom as he was in the speed force and being there gave him a great boost of confidence. Team Flash notes this boost of confidence and are worried that it is not good for Barry to feel so invincible and over confident.

In fact, both Henry and Iris at different points in the episode try and get Barry to be more realistic and know when it worth taking risks.

Speaking of risks, Wally is trying to do his part in helping the Flash. Wally uses his car to stop a meta human purse snatcher but this guy is ready to kill wally until Joe uses the meta human collar to capture him. Wally explains to his dad that he wants to be worthy of the Flash saving him. Wally doesn’t think he is that person because he didn’t want to see his dying mother and he is the reason why the Flash lost his powers. Later, Joe asks Barry to talk to Wally about the risks he is taking.

Meanwhile. one of Zoom’s Earth-2 minions uses their powers to take down Mercury Labs. This minion is Earth-2’s Laurel Lance who uses her Canary Cry that seems more a part of her than a device Cisco made. Thankfully, the Flash arrives to save Dr. McGee who knows that Barry is the Scarlet Speedster.

So Barry takes Dr. McGee to STAR Labs where she meets Henry and it seems the two instantly hit it off. Of course this is a reunion of the 1990s The Flash TV show where Amanda Pays played Tina McGee to John Wesley Shipp’s Barry Allen.

Also at STAR Labs, Jesse gets Caitlin to test her as she fears that she is now a meta human after being hit by the dark matter. Harry assures his daughter that she isn’t while Caitlin gets visions of Zoom.We see later that Caitlin is suffering from PTSD due to her Zoom captivity. Caitlin tells Cisco that Jay took everything away from her like her confidence. Cisco assures Caitlin that isn’t the case and they are here for her.

Jay sends Barry a Flash signal on the CCPD building. Barry goes to meet Zoom at his lab and finds him looking at his evidence wall. Jay tells Barry that they are very much alike as they have the same tragic backstory but he actually witnessed his mother’s murder. Jay another thing that makes him different is that Barry always wants to be a hero. When Barry is ready to attack Zoom, Zoom notes that another building is ready to be taken down. Barry has a choice, fight Zoom or save lives. Barry of course chooses to save lives and Zoom notes that is how he will win.

So the Flash has his talk with Wally to try and talk him out of endangering his life in stopping meta humans. Team Flash is alerted to a meta human on the corner of Main and 5th (but in reality it is the intersection of Burrard and W. Hastings in Vancouver). Then the Flash arrives he is shocked to see it is Laurel Lance, who introduces herself as Black Siren.

Harry asks if Team Flash knew Black Sirens dopplganger and Caitlin responded that they loved her. 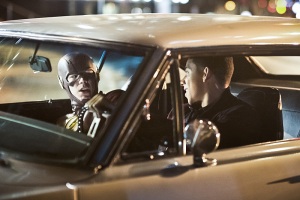 We see Black Siren and the Flash circle each other when she unleashes her Canary Cry to knock the Flash out. Her cry is at a decibel level that would kill a human. Black Siren starts to throw punches and is about to do another cry when Wally arrives in his car to knock her out. When Joe finds out, he isn’t too happy that Wally has done the opposite of what he and Barry told him.

Back at the CCPD, Black Siren and Zoom talk about their plans to take out buildings. Apparently, this is to throw people off their toes as it will cover up what Zoom is up to but we don’t know what that is. Zoom orders Black Siren to knock down another building.

Cisco’s meta human alarm goes off and Barry has to make the choice of stopping another building from coming down or using his speed to help get the frequency device up and going. Cisco comes up what he calls a bad idea but I think was perfect. This idea is Cisco and Caitlin dress up as their Earth-2 dopplegangers Reverb and Killer Frost to entice Black Siren to join forces and defeat Zoom so they can rule Earth. The two are somewhat convincing and it looks like Black Siren is going to accept the offer but knows that Caitlin and Cisco aren’t their Earth-2 selves as Reverb is left-handed while Cisco is right.

The Flash does manage to get enough speed for Harry to turn on the device. We start to see Black Siren and other Earth-2 meta humans fall to floor holding their ears. Zoom is affected too but opens up a portal back to Earth-2. Jesse and Harry are able to not be affected because of special headphones. But Jesse’s doesn’t work so Harry gives her his and he gets knocked out. With all the Earth-2 meta humans out, the Flash collects them all. Some are in Iron Heights while others like the Black Siren are put in the pipeline. Barry, Caitlin and Cisco decide against telling Detective Lance and Sara about Earth-2 Laurel as that isn’t their daughter/sister. And being Killer Frost has helped Caitlin get her confidence back as she realized her place is helping Team Flash take down meta humans. A group hug is had.

With Earth-1 seemingly safe from Zoom, Iris throws a dinner party for everyone. Joe tells Wally how proud he is of him for helping the Flash and Jesse is proud too so we see there definitely is something something between them. We can assume with Jesse’s behaviour that Harry must be okay. Also at this party is Dr. McGee and we definitely see something between her and Henry. Since there is a bit of a calm, Barry wonders if Iris would like to take a shot at a relationship with him and she says yes. After Joe gives a toast, we see Cisco have a vibe. In fact, Cisco has been vibing through the whole episode. It started with one dead bird to seeing several birds hitting a building and falling dead. Finally, Cisco vibes Earth-2 being completely destroyed. Cisco hopes that he has not just seen the end of the world.

The dinner party is cut short when Zoom arrives and takes Henry. Barry is forces to flash away revealing to Wally that he is the Flash. Zoom takes Barry to Barry’s childhood home. Zoom tells Barry that he will now be just like him as he is going to let him see a parent die in front of his eyes. Barry begs Zoom to not kill his father but him instead. Henry tells Barry that everything will be fine and that he is proud of him. Zoom then kills Henry right in front of Barry.

I guess we should have seen this coming but still it does hurt. And it sucks not having this connection from the 1990s The Flash to be no longer part of this universe. Now the season finale is next week and I really do think the man in the iron mask is now Earth-2 Henry. Who do you think is the man in the iron mask. Sound off in the comments.