When the Gondol tribe gets back to camp, Aubry and Joe are reeling. By voting for Julia, Joe has made himself a target. Although Aubry voted for Peter to go home, it was clear that she initially voted for Julia as well, putting herself in the same boat as Joe. Scot now knows that he cannot trust Aubry and Joe moving forward in the game. Not only have they put a target on their backs, but they are also in the minority on the Gondol tribe. Joe thinks he will be the next person voted out If Gondol has to go to another tribal council.

At Chan Loh, Cydney notices a bulge in Neal’s cargo shorts. She and Jason believe that Neal has found a hidden immunity idol and is keeping it in his pocket. Knowing that Neal could have a hidden immunity idol convinces Jason that he should blindside him at the next tribal council. Just as Jason starts planning his strike against Neal, a boat arrives at the beach with good news. The tribe has 5 minutes to pack their things to head over to the Gondol beach. It’s time for the tribes to merge. Michele, who felt like she was in a good position in the Chan Loh tribe, is nervous about the merge while Debbie is excited for the next phase of the game. Debbie tells us that she is ready to take the offensive going into the merge. She plans on bringing new people into her alliance to use them to her advantage.

The castaways on the Gondol Beach can see a boat traveling toward them in the distance. As the boat gets closer, they can make out the faces of their fellow castaways. Everyone is elated to see that the tribes are now officially merged. Scott is happy to be reunited with Jason and Cydney. He hopes the three of them are ready to take the game to the very end. Aubry is relieved to be back on a tribe with Neal and Debbie. Having the four former Brains tribe members together might have saved Aubry from being the next person voted out of the game. The newly merged tribe is called “Dara”. As the Dara tribe enjoys their merge feast and gets to know each other, every member secretly thinks about their next move. There are castaways from each of the three original tribes on one beach: four Brains, three Brawn, and four Beauty. Tai feels like his closest ally is Scot from the Brawn tribe. The two bonded as members of the Gondol tribe and Scot is the only person who knows about Tai’s hidden immunity idol. Nick notices that the castaways from Brawn are enjoying being the center of attention. He doubts the castaways from the Brains tribe will be willing to work with the Brawn alliance. Nick believes that puts him and his closest ally, Michele, in a great position in the game.  After the feast, Aubry has a chance to catch up with Debbie. They confirm that the alliance between the former Brains members is as strong as it ever was.

Neal thinks it makes sense for the Beauty and Brains tribe members to align to get rid of the Brawn tribe. While discussing strategy, Nick tells Neal he has noticed how close Scot and Tai seem to have become. Aubry and Neal pitch the idea of getting Nick and Michele to vote along with the four Brains alliance members to target a member of the Brawn alliance. It would only take 6 votes to have the majority at the upcoming tribal council, but Nick wants to keep his options open.  He wants to ensure that he’s in the best position possible. Playing both sides, Nick goes to the Brawn tribe and makes a similar plan with them. The Brawn alliance members including Tai, Julia, and Nick would need to vote together to have the majority and eliminate someone from the Brains alliance. Jason wants to focus on voting out Neal and his immunity idol. Jason and Scot tell Nick the plan to blindside Neal within moments. Scot even tells Nick and Jason about Tai’s hidden immunity idol. This is great news for Jason, who possesses a hidden immunity idol of his own that only he, Scot, and Cydney know about. If Jason can convince Tai to combine the two idols they possess, they can use it as a Super Idol and play it after the votes are read at tribal council. Nick is turned off by Scot and Jason’s confidence but he thinks that makes them both easy targets. Neither of them will suspect that Nick is planning to blindside them until it’s too late.

Neal shows off some of his the wounds he has obtained during his time on Survivor while Debbie focuses her attention on Tai. She tells Tai he is the newest member of their alliance. Tai seems taken aback by Debbie’s aggressive approach. He says he can see straight through Debbie’s tactics. As a matter of fact, most of the Dara tribe isn’t receptive to Debbie’s techniques. Her own ally Aubry even thinks Debbie is making the Brains alliance look desperate. Meanwhile, Jason, Cydney, and Scott are bonding with Julia and Michele. Michele’s jaw drops when Jason reveals that he suspects Neal has a hidden immunity idol. Jason quickly orchestrates a plan that would allow his alliance to flush out Neal’s idol. He wants to target Aubry first because she would least suspect the tribe to be voting for her. Like Nick, Michele also wants to keep her options open when it comes to who she will be working with in the game. Aubry talks to Nick about forming a possible alliance, but Debbie has been aggravating him so much, that he doesn’t really want to work with the Brains alliance. Aubry voices Nick’s concerns about Debbie to Neal. People are so turned off by Debbie that it may be difficult to get the necessary support for their alliance to take control of the game. Noticing their backs are against the wall, Neal reveals to Aubry that he has a hidden immunity idol. Now they just need to figure out who the rest of the tribe will be voting for so that they can use the idol to protect their alliance.

When the tribe arrives at the first individual immunity challenge of the season, Jeff Probst takes a moment to address the toll the game is taking on the castaways’ bodies. Neal, Aubry, Tai, and Scot all reveal that they have some scrapes and cuts that may be infected. The elements have been taking a toll but all the castaways are pushing through just fine. The individual immunity challenge is to balance small balls on a disk while standing on a small balance beam. The castaway that is able to balance the balls the longest will win immunity. Joe is the first person out of the challenge, followed by Debbie, & Jason. After 5 minutes, the castaways have to add one more ball to balance. Michele, Neal, Scot, Cydney and Aubry all follow shortly after the second ball is added. After another 5 minutes, the final 3 castaways add another ball to balance and in the end, Nick wins individual immunity.

Nick and the rest of the Beauty alliance are in the middle of a standoff between the Brains and the Brawn alliances. Nick leans toward voting out a member of the Brains alliance but he’s not a fan of Scot and Jason’s arrogance. When he talks strategy with Neal and Joe, Neal tells Nick that the physical prowess of the Brawn alliance makes them the biggest threat in the game. Aubry and Debbie work on trying to win over Michele’s loyalty. They want to target Jason and take control. Michele would love to work with Aubry and Debbie but she isn’t sure if it’s her best strategic move. When Michele and Nick finally get together to discuss strategy they decide that they would be better off joining forces with the Brawn tribe after all. They expect the Brawn alliance will be much easier to outsmart in the end than the Brains alliance. Aubry should be receiving the most votes at tribal council.

The First Member of the Jury 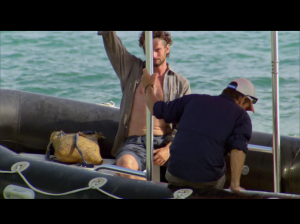 While everyone is on the beach preparing for tribal council, Probst arrives with the Survivor doctor. Probst is concerned about some of the infections the castaways have been getting. This is the first time I can ever remember something like this happening on the show. The doctors normally don’t make house calls to the camp unless it’s a dire emergency. This time, the sole purpose of the doctor visit is to get a closer look at each of the castaways that have infected wounds. Dr. Rupert examines the cuts on Tai, Scot, and Aubry. They have a few infected cuts but all the cuts are manageable. Neal, however, has the worst infections of the bunch. Through further examination, it’s determined that the infection on his knee is very close a joint and could be dangerous. An infection in a joint could destroy the joint in a matter of hours. Dr. Rupert decides the best course of action is to pull Neal from the game. Neal is a huge fan of the show and is devastated when he’s informed that his Survivor journey is over due to a few small cuts. Probst gives Neal a few moments to inform his tribemates that he will no longer be allowed to play the game. Aubry is very emotional seeing her closest ally pulled from the game. It actually crosses her mind to ask Neal to give her his hidden immunity idol but she wasn’t able to bring herself to do it; Neal ends up leaving the game with his immunity idol safely in his shorts. Aubry should consider herself lucky because had Neal not been removed from the game, there was a very good chance she would’ve been voted out that night at tribal council. Instead, Probst informs the tribe they will not be attending tribal council and Neal will be the first member of the jury to decide who will win the title of “Sole Survivor” once he recovers from his injuries. Moments later Neal, Jeff, and Dr. Rupert climb into the boat and take off into the distance.