After last night’s stellar Supergirl/The Flash cross over episode, I was slightly disappointed that there was no reference to Barry’s trip to National City. I thought there was going to be an explanation in this episode but alas no. Was it cut for time? Or will we see it when the show returns on April 19? This episode seems to have set up for Barry’s travels to another Earth but didn’t go there by episode’s end.

The reason why Barry ended up in National City was so he can get faster. And “Flash Back” was all about Barry trying his best to get faster by reading any book he can get his hands on to help. But it was dinner with Wally (still being very underutilized) that gives Barry the idea of going back in time to talk to Eobard Thawne to help him get faster.

When Barry tells this to Team Flash, Harry is against it as he could seriously mess up the timeline. Barry is insistent and promises to be careful. Cisco and Caitlin help Barry with his time travel trip and reminds him that the point in time he is going back to they don’t know Wells is evil and cannot mention certain things like how Ronnie is still alive. The point in time that Barry is going back is where he faced Hartley Rathaway aka the Pied Piper. Caitlin also gives Barry a tranquilizer that will knock out past Barry giving Barry 6 hours to ge the information that he needs.

So off Barry goes into the particle accelerator to travel back a year ago but coming along for the ride is a time wraith. Barry realizes he has arrive too soon and his past self gets a brief glimpse of him. Hartley takes down the Flash which gives Barry a chance to swap into the scene. Unfortunately, when Barry tries to knock his past self out, he ends up fighting himself but does knock out his past self and swaps their emblems.

Barry takes in Hartley to STAR Labs. In the pipeline prison, we get a replay of what happened last time with Cisco asking Hartley to remove his cochlear implants. Hartley says if he does, he will be in excruciating pain but Barry remembers that Hartley used the implants as an explosive device to break out. Barry then asks Cisco to check for explosives in Hartley’s implants and he does find them. Hartley removes the implants with the promise of new ones given to him.

Barry then speaks to Wells to get his help in increasing his speed and writes out the speed force formula. Wells wonders why Barry wants to get faster and he gives a convincing answer. Wells agrees to help.

At the CCPD, we see Eddie again and Joe asks him to look into Wells. However, the time wraith invades the precinct and Barry arrives too late to stop it. But we have Cisco calling it a Dementor later on in STAR Labs. Dementors are the guards of Azkaban in the Harry Potter book series.

At STAR Labs, Wells knocks out Barry as he knows that he is from the future and takes him to his time vault. Wells knows Barry is from the future because of the time wraith. At first Barry tries to say he isn’t but drops the ruse and calls Wells, Thawne. Wells realizes that if Barry is from the future then it means he failed and is ready to kill him. Not wanting to disrupt the timeline, Barry says that Wells did go home and he came back in time so he can learn to get faster to stop a singularity he created when Wells went home. Wells comes to the conclusion that he doesn’t need this Barry and is about to kill him but Barry says that he left a note for the past Barry telling him everything and if he gets killed, Wells will never get home. 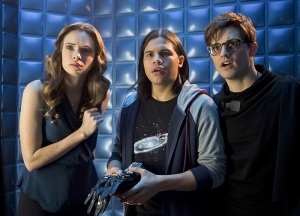 You know who else is at STAR Labs? The time wraith who interrupts Cisco questioning Hartley about how his sonic gloves work. By the way, loved how Cisco tortured Hartley with Rick Astley. Hilarious. With the time wraith in STAR Labs, Caitlin runs into Hartley’s pipeline prison. Cisco shuts them in and loved how Hartley said “Holy Harry Potter” when he saw the wraith. The wraith is pounding on the glass and it is starting to crack. Eventually, Hartley manipulates the sonic gloves to emit a sound that scare the wraith away.

Barry and Wells arrive too late to help as they were having there tete a tete. Wells then formulates a game plan on how to get the wraith. Cisco is tasked with working on the sonic gloves but when he can’t figure out how to use them to stop the wraith, Wells suggests getting Hartley to help but he must remain in his cell.

Unfortunately for Barry, his past self arrives creating confusion. Barry admits that he is from the future but stops from revealing too much to disrupt the time line. Just before Barry faces the time wraith, Wells gives him a futuristic USB key that contains information that will help him get faster and it involves tachyeon energy.

Barry is ready to go back home and take the time wraith with him. Barry gets back his white logo and gives the red one back to his past self. He tells Team Flash that they have one year to figure out how to stop the time wraith considering he will bring it back with him. Just before he leaves, Barry tells Cisco how Hartley knows where Ronnie is. Barry enters the particle accelerator and starts to run. Unfortunately, the time wraith slows Barry down but the past Barry manages to lure the time wraith away from Barry so he can get enough speed to open up a portal. When Barry and the wraith disappear into it, past Barry thinks what he witnessed as cool.

Once Barry returns to his timeline, he is hoping Team Flash has figured out how to stop the wraith. Cisco shoots it with a gun but it doesn’t do anything. As the wraith starts to choke the life out of Barry, Hartley’s sonic gloves come out and emits a sounds that makes the wraith disappear. Wielding those gloves are Hartley who has apparently turned good and has a good relationship with his parents unlike the last time.

Barry takes Cisco and Caitlin to the time vault to plug in the USB key. At first nothing seems to happen and Barry is pissed and pounds his fist on the console. When Barry does this, a formula is illuminated and he has his answer on how to get faster. 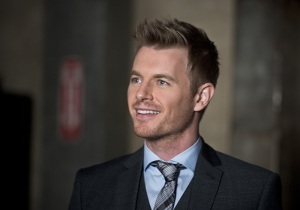 If there was one good thing that came from Barry’s trip to the past was that it helped give Iris closure on her relationship with Eddie. You see Iris told Barry about her date with her editor (still all kinds of wrong) but she feels she can’t move on as she still thinks about Eddie. So while Barry was in the past, he got Eddie to record a video message to Iris for her birthday.

When Barry returns to the future, he tells Iris that he had this recording from over a year ago from Eddie. In the video, Eddie gives a loving message to Iris saying how she doesn’t need him because she is a strong independent woman and is one of the reasons why he loves her.

Back at STAR Labs, Barry takes a look at Jay’s helmet and vows to take him down.

We get a bit of a break again as new episodes won’t resume till April 19.