Greyston Holt as Clay Danvers and Benjamin Ayers as Jorge

Looks like we are inching very close to Savannah’s premonition from coming true and Katia’s kidnapping of Rocco doesn’t go quite according to plan while Jeremy has a unique way of finding Roman.

Jeremy’s road trip leads him to a realtor. Jeremy tells he is interested in renting a large house with lots of land for a few months. The realtor said she just rented it out and but gives him the listing should it become available again. Jeremy makes a joke hoping it wasn’t college students renting it and the realtor says it is actually Russian business men.

Conversation with the Albino

Greyston Holt as Clay Danvers and Oliver Becker as the Albino

The Albino calls Clay to meet at the diner he took over the last episode. Clay brings Jorge to the diner. Once inside, the Albino knows that Clay wants to kill him with a beer bottle but lists all the reasons why he can’t. Their conversation can be summed up that they are both feared killers and the Albino knows that Clay’s weakness is Elena.  bartender gives beer to clay, albino lists why shouldn’t kill him so two have a talk. Do I is nothing jut that albino sees both as killers and knows clay weakness is Elena. Once back with Jorge, the two observe the Albino and the two talk about the lives they lead in order to protect their secret. Jorge then gives Clay the location of Karen Morgan’s body for Jeremy and notes that she was 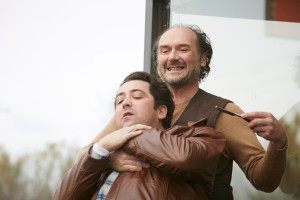 Oliver Becker as the Albino

the first female he had to bury. The two then see a man pull up in a pickup truck. The Albino greets him and when he sees Clay watching, slits the guy’s throat and goes back in. Jorge is horrified but Clay knows it is message for them. Clay hides the body but when he returns Jorge is dead and and the Albino gone. Clay goes back to Stonehaven to tell Elena and talks next steps.

Elena calls Konstantine to meet at Stonehaven. Elena wants him her uncle to call off the Albino but Konstantine says only Roman can. But if Elena gives them Sasha then the Albino will be called off and the kill list disappears. Both don’t want a war but neither will do what the other wants as both are protecting their pack. Elena notes how Roman walks all over Konstantine and he admits to hate being ignored by his father for his sister. Elena says Roman needs to die and not her father. Konstantine agrees and won’t be the one to do it. Elena says she will and will handle everything. Konstantine says he will call off the Albino once dad is dead. Konstantine wonders how Elena will break into Roman’s compound she says she has a way and he can see  for himself what she is capable of. When Elena sits down in her chair and look at fire, it looks almost like the premonition and we then see the premonition of her bloody and in a burning Stonehaven.

Paige and Rachel perform a locator spell but it doesn’t work at first. Rachel becomes frustrated but Nick says think of Rocco’s smile. The spell is performed again and this time it works, and Rachel knows where Katia took Rocco. However, when they get to the location, it is just a forest. The spell is performed again and Rachel gets a better idea of where Rocco is that helps Nick determine he is at Alcott, NY. However, the spell has taken its toll on Rachel as she emerges with a bloody nose.

Meanwhile at the motel, Katia is trying to calm a crying Rocco and calls Alexei for a number which he gives. Katia tells her brother that taking Rocco will help save their family.

Katia uses the number to send Roman the video she took in the last episode. Katia later Facetime’s with Roman to say Rocco is a werewolf witch and will give him to him if he calls off the blood feud. The two arrange a time and place to meet but Roman sends his men to find Katia.

Sasha and Alexei go to Nick to help find Rocco. On the drive, Sasha presses Alexei as to why Katia would take a baby. Eventually, Alexei tells his dad it is all about stopping Roman. Sasha is angry and tells his son that Katia is in grave danger.

As Katia is preparing for her meeting by dressing a doll as Rocco, Roman’s men burst into her room where she shoots one but gets captured by the other.

Katia is being taken away but Nick arrives and defeats Roman’s man. Rachel gets Rocco back while Katia explains to Sasha why she did what she did. Katia doesn’t want to go back to Stonehaven with her father but will go back with Nick. Nick cleans up Katia’s room when Rachel comes in. Rachel wants Nick to tell Jeremy that she will no longer let anyone decide her future or her son’s future. Rachel tells Nick she is going with Paige to train her.

Paige and Nick say farewell and she notes Nick and Rachel have a connection whether it be family or whatever and it shouldn’t be ignored. I guess that ends any chance of Nick and Paige getting back together. Why make me love them as a couple in season 2 and not have them get back together in season 3. What a waste.

As Nick and Katia leave to return to Stonehaven, more of Roman’s men follow them. While on the road, Katia explains to Nick why she took Rocco and tells him how she saw her mom get killed in front of her eyes. Their car then gets rear ended and they crash in the forest. Both are out for the count and Roman’s men look on