Very quickly in the episode, we find out what exactly has been Hugo Strange’s technique for torturing Penguin. The helmet he has been forcing him to wear as part of his rehabilitation basically makes Penguin experience recurring nightmares about his mother being killed. The nightmares are so traumatic that they are quickly altering the Penguin’s behavior, making him extremely docile compared to his usual aggressive nature. To be sure Penguin has been completely changed, Strange orders that he is put through the “Ice Cream Test”. Penguin is sent to eat lunch with the rest of the inmates but he doesn’t notice that a large scoop of ice cream has been added to his tray. When one of the larger inmates attacks Penguin for having the ice cream, he doesn’t even do anything to protect himself. There are no signs of the Penguin that marched himself into the asylum and announced himself as the reigning King of Gotham. Elsewhere in Gotham, Bruce Wayne enters an alley where he is met by Selina Kyle. She hands Bruce the pistol he asked her to acquire for his mission to kill “Matches” Malone. He still has his eyes set on hunting and killing the assassin on his own.

Detective Gordon looks up from his desk at the GCPD to see his girlfriend Leslie approaching him. Gordon attempts to apologize for the events that happened between the two of them when they were at the Arkham Asylum last episode, but she quickly cuts him off. Leslie is concerned about her friend and former co-worker, Kristen Kringle. She was under the impression that Kristen left town with her abusive boyfriend. When Leslie went to human resources to find out Kristen’s new address, they instead handed her Kristen’s final paychecks. Leslie and Gordon both find it strange that Kristen would leave her paychecks behind to start a life with someone who has physically hurt her. Gordon agrees to look into Leslie’s disappearance to put his girlfriend at ease.

At Wayne Manor, Alfred and Bruce prepare to go after Matches. Alfred isn’t completely convinced that Bruce is mentally ready for the task but he has promised he would him with the task of killing the man that murdered the young boy’s parents. The first step of their hunt is to track down Matches former partner-in-crime, a man named Cupcake. Matches and Cupcake were allies in crime until Matches’s testimony put Cupcake in jail for 10 years. Alfred and Bruce hope that Cupcake is still angry enough with Matches to reveal his location.
Alfred and Bruce arrive at the hangout for Cupcakes gang “The Mutants”. The gang is in the middle of some kind of fight club when Bruce and Alfred approach. Alfred tells Bruce to allow him to do all the talking because he is a lot more experienced in situations like this. Bruce watches as Alfred interrupts the fight club and asks directly for Cupcake. Cupcake is far from anything I would consider a cupcake. He’s a pretty big guy and despite his huge grin, he still comes off very intimidating. Before Alfred can completely explain the situation to Cupcake, Bruce steps in and introduces himself. It’s probably not the smartest thing in the world for a boy-billionaire to announce who he is in a room full of criminals but as everyone has already stated, Bruce might not be ready for a task as big as this. He’s so eager to get the information he seeks that he reveals more information than he actually should. Bruce offers Cupcake 100,000 dollars for the whereabouts of Matches but at Cupcake isn’t worried about the money. Cupcake is now interested in throwing his weight around a bit and challenging Alfred to a fight. He tells them that if Alfred fights him and they pay 50 thousand dollars, he will allow them to leave with the information they have come to acquire. Oops! It seems like Bruce’s mouth has gotten Alfred into trouble, but the butler uses the fight with Cupcake as a teaching situation. Alfred narrowly wins the fight, and Cupcake agrees to hold up his end of the deal. Cupcake tells Bruce to that they should go talk to Jeri in Celestial Gardens for Matches’s exact location. Seconds later, Alfred collapses from his injuries. 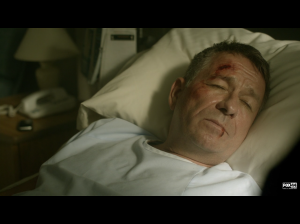 Bruce stands at Alfred’s bedside in the hospital. He needs time to recover from his fight so he asks Bruce to promise that he will wait while Alfred gets some rest. Bruce acknowledges what Alfred wants him to do but as soon as the butler is sleep he takes off toward Celestial Gardens to find Jeri.

Hugo Strange continues to evaluate Penguin’s progress by taking him through a word association exercise. Penguin tells Strange that he desires to be normal and to be a good person. Strange assures him that after a few more therapy sessions he will be one the right track to being a normal well-adjusted young man. Penguin looks horrified at the aspect of having to go through any more torture but he admits that he wants to get better.

Gordon visits Ed Nygma in his lab at the GCPD to try to find out if he’s heard from Kristen Kringle lately. Ed acts surprised as Gordon reveals that Kristen hadn’t come to pick up her paychecks. Unbeknownst to Gordon, Ed is fully aware that Kristen is missing because he was the one who killed her and her abusive ex-boyfriend, Tom Dougherty. Gordon questions Ed a little but is forced to hurry off to handle business after he receives an urgent phone call. Ed suspects that Detective Gordon is getting close to figuring out his secret.

The urgent phone call Gordon received was from Alfred’s hospital room. When he and his partner, Detective Bullock arrive at the hospital, Alfred fills in the two detectives about Bruce’s plan to find and kill Matches Malone. It’s up to Gordon and Bullock to stop Bruce while Alfred is bedridden.

When Bruce enters the night club at Celestial Garden he meets Jeri who has been waiting to meet him. She leads him through the club to her dressing room area where Bruce explains that he intends on killing Matches Malone. Jeri warns Bruce about Matches’s track record for being a murderer. In her own way, she tries to warn Bruce about what he’s getting himself into. Bruce offers to pay her for the information about Matches but she quickly shoots down his offer. For the second time this episode, Bruce is faced with the realization that money cannot buy respect. Ultimately, Jeri gives Bruce Matches’s address. She says that the killer will be happy to see Bruce when he arrives. As Bruce heads out of the club, he’s stopped by Jim Gordon. When Jeri notices Gordon attempting to prevent Bruce from going after Matches, she creates a diversion allowing Bruce to escape.

Bruce makes his way to the apartment complex and knocks on the door of apartment 9. Moments later he finds himself staring into the eyes of the man who murdered his parents in cold blood. Matches, of course, doesn’t recognize Bruce so Bruce pretends that he wants to hire Matches to kill someone for him.

When he takes Bruce inside his apartment, the two talk for a few moments. Bruce struggles with the urge to kill Matches when he starts to see him as a person and not the monster he thought he was. The encounter doesn’t’ go quite as Bruce had planned. When Bruce confronts Matches about the murder of his parents, he’s completely thrown off by the fact that Matches barely even remembers killing them. In fact, Matches doesn’t even know who Thomas and Martha Wayne are. Bruce points his gun directly at Matches’s forehead but he notices that the criminal seems almost eager to die. Matches explains to him that after all these years of doing wrong and going unpunished, he’s ready to atone for his sins in death.

This explains why Jeri gave up his location so easily. She knew that Matches had been waiting for someone to make him answer for his years of killing almost without consequence.
Seeing Matches as a person instead of the monster he had always envisioned him to be, Bruce puts the gun down and walks out of the apartment. As Detective Gordon reaches Bruce standing in the hallway outside of Matches’s apartment door the two hear a loud gunshot from inside the apartment. Matches has committed suicide with Bruce’s gun.

Penguin has one final test in the Asylum. He’s thrown into an observation room with the same angry criminal that attacked him over the ice cream. Only this time the other inmate is strapped to a chair. Penguin notices a large knife on the table then grabs it and walks over to the inmate. This would be the perfect time to get revenge on the Ice Cream Inmate but instead, Penguin uses the knife to free the inmate. Ms. Peabody and Hugo Strange watch approvingly as Penguin passes the test with flying colors. According to Strange, Penguin has been completely cured of his criminal insanity and is free to go out into the world as a changed man. Ms. Peabody warns Strange that there will be an outcry from the community once they find out that a criminal like Penguin has been released back into the Gotham but Hugo doesn’t want to hear it. He says he has bigger plans for Penguin in the future that Ms. Peabody can’t even know about. So despite Ms. Peabody’s objections, Penguin is escorted outside of the gates of Arkham Asylum as a free man.

At the GCPD, Bullock and Gordon discuss the events surrounding Matches’s suicide. Bullock is ready to move on but a part of Gordon still wonder who was the person who hired Matches to kill Bruce’s parent.

When Alfred arrives back home at Wayne Manor, he finds a note stating from Bruce. Alfred reads the note that basically says that Bruce is running away from home to go live on the street with Selina Kyle. He wants to live amongst the people of Gotham to learn some street smarts. Malone’s death has taught him that there is much more he needs to learn about crime in the city of Gotham and he can’t do that while living in Wayne Manor on the outskirts of town.

Elsewhere, Ed Nygma is starting to obsess over the possibility that Jim Gordon could be trying to prove that he had something to do with Kristen Kringle’s disappearance. The riddle-obsessed serial killer has started to freak himself out and this could only be bad news for Detective Gordon.