"Falling" -- Kara turns on her friends and the citizens of National City after being exposed to Red Kryptonite makes her malicious and dangerous, on SUPERGIRL, Monday, March 14 (8:00-9:00 PM, ET/PT) on the CBS Television Network. Pictured left to right: Italia Ricci and Melissa Benoist Photo: Michael Yarish/CBS ÃÂ©2016 CBS Broadcasting, Inc. All Rights Reserved

A lot of Kara on Red Kryptonite is very similar to how Clark in Smallville acted on the stuff except Clark never threw someone off a building (at least I don’t think so) nor maliciously got someone fired.. Even though we know that being on Red K makes Kryptonians apathetic, it really was a great showcase for Melissa Benoist to showcase her range.

“Falling” — Kara turns on her friends and the citizens of National City after being exposed to Red Kryptonite makes her malicious and dangerous. Also, Cat appears on THE TALK to discuss Supergirl, on SUPERGIRL, Monday, March 14 (8:00-9:00 PM, ET/PT) on the CBS Television Network. Photo: Michael Yarish/CBS ÃÂ©2016 CBS Broadcasting, Inc. All Rights Reserved

But the episode starts with Cat Grant appearing on CBS’s The Talk where one of the topics of discussion was her relationship with Supergirl and being her biggest champion.  Cat describes Supergirl as a good person and role model. At the same time, we see a bunch of girls tease another girl for wearing a Supergirl costume. Supergirl flies down and pretends to be the girl’s friend, even using her name. Supergirl tells the mean girls that she is always friends with nice girls. 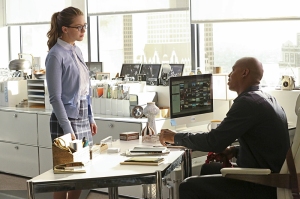 “Falling” — Kara turns on her friends and the citizens of National City after being exposed to Red Kryptonite makes her malicious and dangerous, on SUPERGIRL, Monday, March 14 (8:00-9:00 PM, ET/PT) on the CBS Television Network. Pictured left to right: Melissa Benoist and Mehcad Brooks Photo: Michael Yarish/CBS ÃÂ©2016 CBS Broadcasting, Inc. All Rights Reserved

Back at CatCo, Kara is watching Cat’s interview on The Talk and takes in all the kind words that she is saying about her alter ego. Cat arrives behind her also admiring her talk show appearance. Cat then wonders where Winn is at. When Kara goes searching for Winn, she hears noises at a nearby supply closet and uses her x-ray vision and sees him and Siobhan together. Grossed out by what she saw, Kara goes to James and learns he broke up with Lucy. Kara thinks it was because James told Lucy that she was Supergirl but it was because he wasn’t in love with her the way he should have.

At the DEO, Kara shares with Alex about James’ breakup with Lucy. Alex encourages Kara to pursue James but she doesn’t want to be the rebound girl. The two then attend a meeting with Senator Miranda Crane who now Team DEO offering more resources and funding to hunt down alien threats. There is a definitely flirty air with Miranda with Hank that the two Danvers sisters pick up on. Supergirl is then called into action to help battle a building fire where a fireman is trapped under some debris. Once the firefighter is safe, Kara gets exposed to Red Kryptonite where the radiation gets absorbed via her skin kind of like how Clark was infected with Red K in season 6’s “Crimson” when an infected Lois kissed him.

The next day, Kara has a new slick, chic wardrobe that is not her usual sweater set and her hair is styled in a stylish up do. When Cat asks for a list of replacements for Lucy, before Siobhan can supply her list, Kara presents her with a list that has already been vetted and top choices given to Cat.

Back at the DEO, Hank is debriefing on a Fort Rozz threat, a K’Hund alien that is stealing gold from armored trucks and are getting to try and capture him during his next heist. Supergirl could care less about what Hank has to say and knows what they expect of her. Alex and Hank notice her attitude change.

While on the mission to catch the K’Hund, Supergirl catches up to him and he goes through the motion of how her mother imprisoned him on Fort Rozz. Supergirl is sick of hearing it and after pinning him down, Supergirl decides the K’Hund isn’t worth his time so lets him go. When Alex arrives, Kara lies and says the alien got away.

The next day, Kara’s attitude worsens and brazenly uses Cat’s private elevator that impresses the media mogul calling the move brazen. Siobhan then asks to speak to Cat privately to give her a scoop. The scoop is video showing Supergirl letting the K’Hund get away. Siobhan believes this shows that Supergirl isn’t the hero that everyone thinks she is but Cat doesn’t want to report it and wants to give Supergirl the benefit of the doubt. Of course listening in is Kara.

Later at the DEO, Alex and Hank have captured the K’Hund who tells them that Supergirl let him go. Alex and Hank then confront Kara about this who doesn’t deny it and starts in on Hank about not being true to who he is and hiding behind the Hank Henshaw persona. 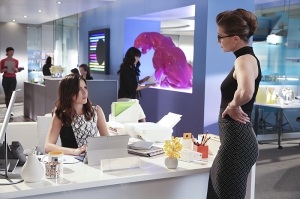 “Falling” — Kara turns on her friends and the citizens of National City after being exposed to Red Kryptonite makes her malicious and dangerous, on SUPERGIRL, Monday, March 14 (8:00-9:00 PM, ET/PT) on the CBS Television Network. Pictured left to right: Italia Ricci and Melissa Benoist Photo: Michael Yarish/CBS ÃÂ©2016 CBS Broadcasting, Inc. All Rights Reserved

Siobhan is on the phone and furiously writing an email. Kara manages to get Siobhan to leave her desk to deal with a matter for Cat and opens up the email to see it is to Perry White offering him the scoop to the Daily Planet. Kara prints out the email then deletes it. Kara shows Cat the email who is so pissed at Siobhan for giving the story to a competitor that she is fired. And some time in the future Siobhan will become the Silver Banshee. James and Winn can’t believe that Kara would be so cold and have someone fired but she blows it off and says they should party at Club Apokolips (a nod to Darkseid’s home world).

At the nightclub, Kara is looking sexy and drags James to the dance floor. Kara tells James that she wants him and that Lucy (“a poor man’s Lois Lane”) was a fool to let him go. James is not into this bold Kara and tries to leave but she uses her super strength to keep him place. Eventually, James gets away to take a call from Cat, who demands to speak to Supergirl. This nightclub scene was similar to season 3 when Clark was on Red K and Lana found him at a nightclub.

At Cat’s office balcony, the two talk. Supergirl points out to Cat how she didn’t like how she was described on TV and then tells her how she really feels about her. Supergirl states that she gets to decide who lives and dies and then throws Cat off the balcony. Supergirl does catch her before Cat is splattered all over the pavement and tells her never to summon her again.

James and Winn go to the DEO to tell Hank and Alex that something is wrong with Kara. The two then look at where has Supergirl been in the last 48 hours and deduce it was the building fire where they see the Red K. Hank and Alex learn that Maxwell Lord created it to stop Non and task him to find a cure.

Cat decides to go on national TV to denounce Supergirl, calling her a threat and dangerous. James and Winn try and talk her out of it but she proceeds and it is played on a loop.

Alex then goes to see Kara at her apartment but finds the door ajar. Once she goes in, Alex is startled by Kara who is now sporting a new uniform that is similar to what Non and Astra wore. In fact, Kara looks so much like her aunt (minus the blonde streak) that I thought Laura Benanti had returned. Kara burns her wardrobe that she says Alex picked for her. Kara then starts to lay into Alex, calling her jealous, wanting her to suppress her powers. Kara says that they aren’t sisters, there is no drop of blood they share within them. Kara then blames Alex for Astra’s death. Alex starts to get teary-eyed but Kara just mocks her and leaves. Kara telling Alex, Hank and Cat how she really feels about them and others things that she has been keeping inside is reminiscent in season 6’s “Crimson” when Clark crashed Lex and Lana’s engagement party to tell everyone how he feels.

Hank and Alex know that they have to take down Supergirl. Miranda agrees as she now perceives Supergirl as an alien threat.

At Noonan’s, Kara empties a bowl of peanuts and proceeds to flick pieces and breaks liquor bottles. I read that this is an homage to Superman III when Superman was on Red K. Kara sees Cat’s broadcast and goes on the street of National City. The DEO arrive and Alex tries to use Lord’s cure but Kara beats away the gun and violently pushes Alex into a car. Kara is really pissed and is about to kill Alex forcing Hank to reveal his true identity to save her. J’onn and Kara fight that he eventually wins allowing Alex to use the cure. Alex tries to get J’onn to run but he changes back into Hank and gets arrested by the DEO.

Once back at the DEO, Kara emotionally tells Alex she didn’t mean what she said to her and is devastated at the words she used. Alex replies that there is a certain truth to it. Martha said something similar to Clark after he came off his Red K high.

Meanwhile, Miranda speaks to J’onn and wants to know if Hank Henshaw is dead. J’onn doesn’t answer so the question is probably yes but we will find out more next week.

The next day, Kara goes on her apology tour, first to James. When Kara is about to reveal her true feelings, James stops her and says he needs to be on his own for awhile. At night, Supergirl visits Cat and apologizes to her for what she did. Supergirl knows that she has lost the city’s trust (as seen with Laura throwing out her Supergirl costume and the firemen taking down their support for Supergirl banner) and will work hard to regain it. Cat allows her to stay on the balcony for a moment of reflection.

This was a pretty great episode. I know after watching 218 episodes of Smallville that these kinds of episodes is what the actors love as it lets them be someone else than their normal character personalities and Benoist definitely hit all the beat.

Next week we learn how J’onn arrived on Earth and how we took over Hank’s life. But in two weeks we get The Flash/Supergirl cross over episode!!!!