It is part 2 of our Russian adventure for our Legends. If you recall in the last episode, Stein, Rory and Ray have been taken to the Koshmar Gulag. While the rest of the team formulate a plan to break them out.

Kendra and Jax are benched from the mission to rescue the rest of the team. Rip doesn’t want to hand over to Savage the other half of Firestorm and Kendra, the only person that can kill him.

Later, Jax knows Stein is hurting and can feel him losing hope. Kendra suggests that Jax use their connection to communicate with Stein. Jax remembers a way Stein used to communicate with Ronnie and it involves carving a message on his arm for Stein. 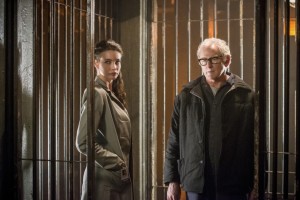 We open up with Stein in STAR Labs, Central City, 2016. Stein is admiring how Cisco has done a good job at recreating the Firestorm matrix equation. But as Stein continues to talk to Cisco, he realizes that  something is off about our fan-favourite The Flash character from his formal way of talking to his hair. Stein realizes he is being duped into completing the Firestorm matrix equation by Vostok who slipped him a drug. Stein remains in 1986 and refuses to complete the equation. Vostok shows Stein another thermacore that once she has the equation will use to create a Firestorm matrix. Stein starts to feel pain and sees a message on his arm “we’re coming”. This gives Stein hope and becomes defiant and manages to withstand a serum Vostok gives him.

Ray is acting all friendly to the prisoners while Rory is just staying quiet. At meal time, Ray tries to approach a fellow prisoner to see if he knows where Stein his. Unfortunately, the Alpha prisoner of the Gulag does not take kindly to Ray and beats him up. Once back in his cell, Ray wonders why Rory did nothing to help.

Rory and Ray are then taken before Stein and tortured in front of to try and get him to talk. Stein is resistant at first but when Ray starts taking a pretty bad beating for Rory that Stein finally agrees to talk.

In the Waverider, Rip is going over his plan to break out the team. The plan is to use the Bratva to help them get into the Gulag. At a steam room, Rip and Snart is trying to convince the lead Bratva member to help them break in and to stop Savage from ruining his country. At first the Bratva member isn’t too keen in helping until he realizes that Sara took out all of his men.

Back at the Waverider, Rip goes over what do to. Snart tells Rip that this isn’t his first prison break (of course alluding to Wentworth Miller’s breakout role in Prison Break). Before leaving, Rip pulls Sara aside for secret mission that involves killing Stein should he be in Vostok’s possession. At first Sara doesn’t want to kill one of their own until Rip shows Sara Star City in 2016 under attack by a whole bunch of Russian Firestorms. Sara agrees to protect the future.

As Sara is preparing for the mission, Snart knows that Rip has ordered her to kill Stein. Sara says she has to if it means protecting her home and the future.

The team arrive as a black market delivery truck. They get in and Snart is disguised as a prison guard bringing in a “dead” Sara into a restricted area of the prison. Once safely inside, Rory sees Snart and Sara part ways.

Sara sees Stein being led into Vostok’s lab while Snart rescues Rory and gives Ray his Atom suit but he is out cold from the beating he took. Rory doesn’t want to leave Ray behind since he took a beating for him.

Back at the Waverider, Jax and Kendra convince Rip they can help. With Kendra’s help, she flies Jax into the Gulag and he blows his knee to turn of the prison’s power.

By doing that, all the prison doors open and the prisoners all escape and chaos ensues. Luckily, in the chaos, Snart, Rory and Ray make it to the courtyard. Meanwhile, Sara sees Stein being led to Vostok’s lab but doesn’t take the shot as Snart convinced her not too.

Elsewhere, Kendra is setting chargers in the prison when Savage, who sensed her presence, greets her. Savage tells Kendra that she will be his. Kendra tells Savage that she will never be his and Rip points his gun at him allowing Kendra to leave. Rip wants his watch back that has a picture of his family in it. Savage gives it back to him and says he has no intention of killing him now but he does look forward to meeting his wife Miranda and son Jonas to talk about Rip. Rip sets off the chargers and Savage, for now, is blown to bits.

In Vostok’s lab, she is in the reactor chamber and realizes that Stein is the missing link she needs. Vostok force merges with Stein who tells her that they will both die if they don’t unmerge because the only thing that will keep them stable is the splicer.

Firestorm Vostok emerges into the courtyard and starts to shoot fire at everyone. Jax confronts Vostox and tells Stein to fight and how he understands his concern now. As Vostok tries to kills Jax, Stein stops her. Eventually, Stein unmerges and Vostok becomes unstable. The Legends escape in the jump ship and make it to safety before Vostok’s melts down.

Back on the Waverider, the timeline is restored and the team celebrates. But the party is cut short when Chronos attacks them in the temporal stream that throws them off course and the crash land.

When the team emerges, they walk into a pretty rough neighbour where destruction abounds. Rip orders Gideon to camouflage the ship. Ray notices a Palmer Technologies building but it says Smoak on it. Sara realizes they are in Star City but Rip doesn’t understand why it looks so run down if the time line is restored. Rip tells the team they are in 2046. The Green Arrow comes upon the team in his disguised voice. Sara tells the Green Arrow it is her while Ray reminds Oliver of their conversation of joining Rip’s team to stop Savage and become legends. However, the man under the green hood isn’t Oliver Queen.

Next week we are in the future for the first time and so looking forward to it.