Tonight’s episode was directed by Michael Shanks and just because he is behind the cameras doesn’t mean there was a lack of Charlie.

The episode opens with Alex and Charlie meeting Shahir about his tumor. The good news is that it is benign, slow growing and can be removed. Alex wants it to be removed now that there is a reason why he can see spirits. Alex can also see that Charlie is reluctant. Alex soon realizes that Charlie doesn’t want to lose his gift. No decisions are made as the two set off to work.

Dana is taking a leave of absence from Hope-Zion and is packing up her office when Cassie arrives with farewell flowers. While some paperwork, Dana faints for a moment and Cassie grows concerned. Dana brushes off her fainting spell and tells Cassie to answer Maggie’s page to go to the ER.

Their patient is Carla who is a gunshot victim of a bank robbery that killed her friend. The bullet hit Carla’s leg and is bleeding badly. Cassie and Maggie get the bleeding to stop and tell Carla that they will leave the bullet in there as it is safer there as removal could case the femoral artery to be cut and she could bleed out. While there is no medical reason to remove the bullet, Carla wants it out as it is a reminder of how she hid behind her friend when the bank robber held a gun to her. Maggie still doesn’t think there is a medical reason and it is more of a plastic issue. Dana overhears this and wonders what her successor recommends.

Dana has another idea and believes the bullet should be removed for evidence to help convict the robber. Dana will walk Cassie and Maggie through the procedure since she no longer has surgical privileges. The surgery is going well until Dana faints for a second and distracts Maggie that causes her to knick the femoral artery. Dana jumps in to remove the bullet and gets Maggie and Cassie to repair the artery. 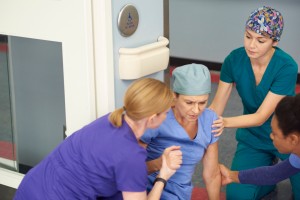 After the surgery, Maggie and Dana are talking when Dana collapses to the floor. But Dana is okay because we later see her pack up her office. Cassie visits and both say they are thankful that they were able to work together. It is quite an emotional scene watching Dana pack away her medical degree, her picture of Molly and hanging her lab coat. We then see her Hope-Zion pass lying on her desk. Later we see Cassie bring Dana to her hospital room as she is being admitted for treatment for her cancer.

Maggie visits Carla who still feels the bullet in her and thought she would feel better after it was removed. Maggie says that the bullet they removed will be used as evidence to help put the guy away and this should help her feel less guilty. We see Maggie bring Carla the bullet who then gives it to a police officer as he is taking her statement. 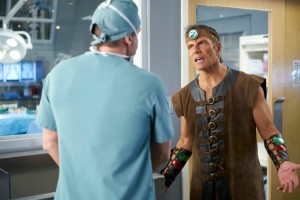 nod to Shanks’ longtime role on Stargate SG-1). Jackson is a fan and Dev watched the show with his roommate. Hope-Zion staff also seem to fans too.

Davey has come to Hope-Zion after injuring himself doing a stunt at a fan convention, hence why he is in his character’s costume.

It is discovered that Davey has a malignant tumor on his spine that requires surgery. Davey tells Charlie he need to talk to his agent Penny to see if it is alright. Penny tells Davey to do the surgery for his health as there is nothing on his docket right now so he can recover. Penny leaves when she gets an important call and Davey is prepped for surgery.

Davey is under and his spirit visits Charlie as he is scrubbing in. A nurse tells Charlie that Penny needs to speak to him something called “Ashes and Rust”. Charlie tells the nurse to tell Penny that he will do so after the surgery. When Davey hears this, he throws a tantrum at Charlie to go and see Penny and not perform his surgery.

When Charlie sees Penny we learn that “Ashes and Rust” is an independent film to be shot in Romania where Davey is the lead. It is the break they’ve been hoping for and Penny and Davey wants Charlie to wake him up so we can shoot the film. Charlie doesn’t want to as he knows that Davey needs the surgery. Davey continues to throw a tantrum to get Charlie to wake him up.

Davey shares that he trained at Yale and got all the classic roles like Hamlet. When he graduated from theatre school, Davey was offered Warrior Squad and got ton of money and never looked back. But Davey felt like he is no longer a classically trained actor but a performance monkey doing what he is told to do. Davey feels that this film is why he got into acting in the first place.

We see Charlie enter the surgery to say to Dev that new information has presented itself and the surgery won’t be performed. Before Davey leaves, Charlie gives him all the warnings and to call him anytime. Davey signs some autographs before leaving.

Alex’s and Jeremy’s patient is Mordecai, a 13 year old boy, who has come in with abdominal pain. When Mordecai starts to seize, his mother Sarah, empties her purse full of medication to see if Alex can use one of them to help her son.

When Mordecai becomes stable, he asks for a drink but only from his own drink bottle. Sara says that Mordecai doesn’t trust tap water. Alex finds out that Mordecai is taking a multitude of medications for a multitude of ailments and conditions. Later on, Mordecai crashes again and Jeremy and Alex tell Sara that her son has very high levels of sodium. Sara is at a lost to what is going with her son who has been sick a lot over the past two years, since her husband left her.

Alex and Jeremy investigate as to why their treatment may not be working. Their investigation reveals that Mordecai had been a patient at Hope-Zion in the past, something Sara didn’t mention. Also, Mordecai has visited several different hospitals 20 times over the last 2 years. A social worker is called to talk to Sara. With Mordecai now stable, Alex visits him to ask more questions about who makes his food and other things regarding his care. Mordecai asks for a drink of water again which raises a red flag to me and knew that Mordecai would crash again, which he does. Jeremy and Alex are still at a loss and decide to retrace their steps. This is when Alex figures out something was up with the water bottle.

Alex visits Mordecai again and he admits that he is the one that making him sick not his mom. We learn that Mordecai made himself sick to get his mom back. You see Sara was so depressed after her husband left that she only came back to Mordecai to take care of him when he got sick with the flu. So Mordecai figured that if he continued being sick, his mom will always be there.

The episode ends with Charlie looking at his brain scan contemplating what to do with Alex behind watching.

So next week, Charlie is going to test going through a whole day without using his ability. We will see how far that lasts.