We are back after what seems like a super long break to find out Felicity’s fate and we eliminate one person that isn’t in the grave in the flash forward but perhaps a clearer picture as to who could be.

We open up with the flash forward, scheduled to happen 4 months from now with Oliver and Barry at the grave where Oliver doesn’t blame himself for what happened and vows to Barry that he will kill the person responsible (which we take to mean Darhk).

Conklin has found out that Oliver has lied about killing Tianna and is taking them both back to Rieter. Conklin shows Rieter the maps that Oliver had and he immediately feels betrayed and tells Conklin he can do what he wishes with Oliver. So Conklin takes him outside and starts to whip him on his back. The Chinese tattoo on Oliver’s abdomen, the one that Constantine put on him, starts to glow. Rieter sees this and gets the whipping to stop as he now needs Oliver. While Rieter and Conklin argue, Oliver takes the latter’s gun and threatens to kill himself until they assure him that Tianna will be safe and he will help them with what they want from the Island. Rieter agrees and Oliver and Tianna are thrown into the Island’s prison cell.

Getting the truth out of Andy

Diggle figures the only way to get Andy to give up Darhk’s lcoation is to beat him up but that gets no where. Lyla suggests that Diggle instead go about it as brother asking a brother. Diggle has a hard time doing so considering what Andy has become but he goes that approach and he gets a lead. Andy mentions Stonehaven.

The Return of Anarchy 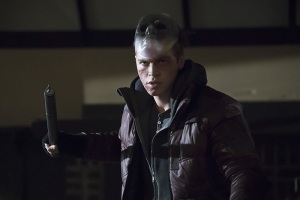 In the midst of Felicity’s shooting, Oliver is on a vendetta to find Darhk and get him to pay. Put the Ghosts rather die than give up any information.

Team Arrow minus Oliver visit Felicity. Donna wonders where Oliver is but Felicity understands and quickly covers for her fiancee. We learn that Felicity requires another surgery to fix some nerve damage.

Meanwhile, thanks to Lance, Oliver finds Darhk’s office and goes there but to find a lot of dead Ghosts and that Anarchy aka Lonnie Menchin has returned.

Thea fears Menchin wants revenge on her and confesses to Laurel that Darhk’s magic didn’t work on her but cured or bloodlust.

It is discovered the blood used for the Anarchy symbol belonged to Menchin’s Foster parents so they go to their home and find Menchin there who has laid a trap for Team Arrow. When Speedy goes to confront Menchin, she fears that he will kill her for burning his face but au contraire he actually thanks Speedy for saving him instead blames Darhk for everything.

The Green Arrow takes Menchin to an abandoned warehouse to interrogate him about Darhk but he isn’t talking. Speedy interrupts to update Oliver on Felicity’s condition and tells her brother to go to her.

At the hospital, Oliver sees Donna and apologies for not being there and learns from her that Felicity is paralyzed and it was the second opinion that confirmed the diagnosis. Oliver doesn’t get a chance to let that news sink in when he sees the police with Laurel as the ADA arriving at the warehouse to take Menchin in.

The Green Arrow stops the prison transport and breaks Menchin free in hopes that he will kill Darhk.

Diggle and Laurel aren’t happy with Oliver but he said that he put a tracker on Menchin thinking he will lead them to Darhk.

Elsewhere, Thea breaks up with Alex because of her anger management/bloodlust issues. Alex understands but thinks Thea is a fighter and the strongest person he knows for surviving everything she has been through.

Also, Laurel knows about Donna and her dad and is happy that her dad is happy.

Back to the action. Menchin manages to lose the tracker and there goes Oliver’s plan. Oliver then visits Felicity who understands that Oliver hasn’t been around because he was going after Darhk. Felicity feared that Oliver stayed away because of her diagnosis and no longer wants to be with her. Oliver eases Felicity’s mind by putting her ring back on her finger and says for better or for worse.

Laurel arrives and tells Oliver that the Stonehaven tip panned out as that is the last area where the tracker stopped.

This is the home of Damien Darhk and Menchin has his wife and daughter hostage. Team Arrow rescues them. Green Arrow confronts Darhk while Speedy goes after Menchin. End result is Darhk spares Green Arrow for saving his family while Menchin gets away.

Later we see that Mrs. Darhk is very Lady Macbeth and said Darhk should have killed the Green Arrow and he says it will happen once the city comes down on its knees.

Also, the events of the evening has Thea getting back together with Alex and Diggle playing a game of cards with Andy.

Back at the hospital, Felicity is all in in taking down Darhk.

We flash forward to 4 months from now. Oliver gets in a limo and there is Felicity. We see that there is no engagement ring on Felicity finger and the air between, while mournful, seems distant. But we get Felicity asking Oliver to kill the guy. This makes me think that the person in the grave is Donna. That is the only possible reason why Felicity is that emotional and whatever hurts Felicity, hurts Oliver too.

I really hope it isn’t Donna as I really love Charlotte Ross on this show and why does Arrow insist on killing parental figures!