If there is one thing that Arrow does really well is leave us hanging for its mid-season finales and wanting us to find Rip Hunter’s time machine plane so we can go forward to January 20, 2016.

Oh Brother Where Are Thou?

Diggle visits his brother Andy trying to see what Darhk has planned for Star City bay. Andy isn’t forthcoming even after Diggle throws in Andy’s face how he abandoned his family. Andy confirms that he did indeed deal drugs and guns. Diggle hopes that Darhk’s influence has worn off and will tell him what he is about too but Andy says he really doesn’t know. Later Diggle visits Andy again but this time the younger brother says that Diggle doesn’t see the real him so Diggle accepts that Andy really is a ghost.

Have Yourself a Not so Merry Christmas 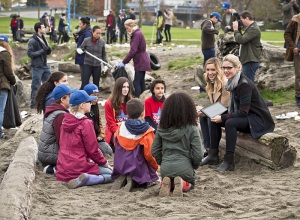 As part of this campaign, Oliver and a group of volunteers are cleaning up Star City bay. Felicity and Thea are talking to a group of school children where one of them is a mini Felicity. However, the clean up efforts and lesson is interrupted when a drone opens fire. Everyone takes cover and Oliver saves mini Felicity while the grown up Felicity hacks the drone and shuts it down. Thankfully no one is killed.

After consulting with Team Arrow, Oliver decides the best way to retaliate is to call out Darhk, which he does in a press conference. Oliver manes Darhk as the leader of the Ghosts and HIVE and has set up a hotline for any tips on Darhk.

Meanwhile, back at Olicity’s loft, Mama Smoak aka Donna is decorating the house for the holidays with both Christmas and Hannukah decorations. While looking through a box, Donna finds the engagement ring and both mom and daughter shriek as the prospect of Oliver proposing.

At the campaign holiday party, we meet Curtis and his husband. When the hubby mentions the cliche proposal of placing the ring in a baked good is when Felicity realizes that Oliver wanted to propose three months ago. 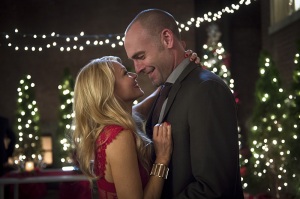 Felicity seeks her mom and finds her getting awfully cosy with her new boyfriend, Quentin Lance. Donna goes to introduce the two but she realizes they both know each other while Felicity wants to forget what she saw. Lance also tells Felicity that Laurel doesn’t know about his new relationship. I have to say that Lance looks really happy with Donna and that is nice to see instead of him being all mopey.

Before I move on, Malcolm visited Thea, who says that thanks to her encounter with Darhk, it seemed to have cured her blood lust. Malcolm isn’t so sure and asks Thea to be careful.

Back to the holiday party, Felicity confronts Oliver about not proposing to her. Oliver says that he was hesitant to after they came back to Star City considering the lives they lead. Felicity says that she knew what she signed up for. This kind of reminds of the scene in Smallville, after Clois’ (Clark and Lois) engagement party where Lois tells Clark that she will understand if their lives together gets interrupted with his superhero work, she tells Clark that she knew what she was signing up for when she said yes.

Olicity’s conversation is interrupted by Darhk who wants revenge for Oliver outing him. Oliver wants Darhk to take his anger out on him but that’s not going to happen. In order to make Oliver suffer, he is going to take those that mean something to him. Darhk tosses Oliver through the windows of his office while his HIVE soldiers take away Thea, Diggle and Felicity. When Oliver comes through, Donna tells him that the men took Felicity. Lance wasn’t so sure if he should have taken action but didn’t want to give up the fact that is not on Darhk side anymore; Oliver says he did the right thing. By the way, I thought it was sweet that Lance was being all protective of Donna when Darhk crashed the party.

Oliver gets into his Green Arrow gear and beats up on Ghosts but doesn’t find out where Felicity, Thea and Diggle are. Oliver goes back to the Arrow Cave to see if Laurel found anything from the hotline, alas no. Laurel then tells Oliver not to blame himself for everything that has happened. Laurel receives a text about information from the hotline.

Laurel goes to see her dad about the tip, which was about him and Darhk. Lance admits that he was working for Darhk to protect her. Laurel says that she can protect herself but does understand that her dad would do anything to protect her.

Back at the Arrow Cave, the meeting between Oliver, Laurel and Lance is interrupted by Malcolm, who promptly disarms Lance. Malcolm gives Oliver an encrypted phone that the Ghosts use to call Darhk.

Oliver uses the phone and talks to Darhk and offers to trade himself for this friends. At Darhk’s lair, Darhk shows Oliver a gas chamber where a volunteer willingly dies.

Darhk allows Oliver to have some alone time with Felicity. The two have a conversation about Oliver’s sacrifice and Felicity tells Oliver that she would have said yes.

Meanwhile, Laurel suits up as the Black Canary, a sight that Lance is trying to get used to, the two continue on their conversation about him working for Darhk that the two come to an understanding.

Thankfully, the Black Canary and Malcolm dressed as the Green Arrow arrives. A fight ensues wher the Black Canary and Malcolm take out the Ghosts and she uses her canary cry to shatter the glass of the chamber. Everyone gets out while Malcolm goes after Darhk, who is about to choke Malcolm to death. Oliver tackles Darhk and everyone manages to get out before the lair blows up.

However, Darhk isn’t dead and reveals to his committee or whatever they are his plan that involves corn and using the algae from Star City bay to make some atmosphere breathable and I scratch my head as I don’t understand at all what he is up to.

After all the dust clears, Thea, Diggle, Donna and Felicity take Oliver to the Star City. Oliver makes a lovely speech and lights the tree. Oliver, who has brought Felicity on stage with him, then thanks Felicity for being the one that lights his way and gets down on one knee and proposes to her. Felicity says yes!!! It was a sweet proposal.

While driving presumably back home, Olicity’s limo is ambushed by Ghosts who open fire on the car. Olicity hit the floor of the limo. The driver is killed but Oliver manages to climb into the driver seat and drives off to safety. Unfortunately, then he goes to check on Felicity in the back but when he pulls her out of the car, she has been shot and blood comes out of her mouth. While all of that is going we see Darhk go home to his wife and daughter to celebrate Christmas.

So is Felicity dead? Unknown and the previews seem to indicate that Felicity doesn’t make it as we see Oliver leaning over a gravestone.

Here is my prediction, Team Arrow is going to fake Felicity’s death to get Darhk to think that he has Oliver where he wants him. The whole cemetery scene with Oliver and Barry is just for show for Darhk. Let’s see if I am right come January 20, 2016.