It is the first part of Heroes Join Forces aka the 2nd annual Flarrow cross-over episode and the back door pilot to Legends of Tomorrow. Majority of this episode has Team Flash, well just Barry and Cisco, going over to Star City seeking Team Arrow’s help in protecting Kendra from Vandal Savage (Casper Crump).

But let’s get to the setup.

Meanwhile Back in Central City

While Barry and Cisco are off protecting Kendra in Star City, Caitlin and Wells are working on biochemical means to increase Barry’s speed so he can defeat Zoom. Currently, Barry isn’t fast enough to defeat Zoom. With Caitlin’s help. the formula that Wells has been working on, Velocity Six, seems to now work. Wells wants to test the serum on Jay but Jay isn’t having any of it as he doesn’t trust Wells and tells Caitlin not to give Barry the serum.

While Wells is out getting supplies for the serum, he is spotted by Patty who follows him to STAR Labs. Patty hold him at gun point and wants to arrest him. Wells tries to tell Patty that he isn’t the Wells she thinks he is and as he comes close, she shoots him. Caitlin comes rushing into the Cortex and sees Wells on the floor. Patty wants to call an ambulance but Caitlin gets her to call Joe instead.

Joe arrives and tells Patty to get out. Caitilin gets Joe to call Jay ack to STAR Labs and when he comes he does take the serum in order to use his speed to phase his hand into Wells’ chest to grab the bullet.  Wells is going to be okay and thanks Jay, who reitnerates to Caitilin not to give Velocity Six to Barry.

Vandal Savage has arrived as a stowaway aboard a cargo ship. Soon Savage comes loose from this handcuffs and retrieves his jacket of knives to kill the dockmen, the ship’s captain and the cop who was at the docks.

Barry, Patty and Joe are on the case and knows that one person that killed everyone and left a trace of his knife in one of the victims.

Meanwhile, Kendra has prepared a nice meal for Cisco at Jitters but their date is interrupted by Savage who calls her Shayera and calls her new name, Kendra, boring. Cisco stands between Savage and Kendra while he sends out s distress call to Barry. The Flash arrives just in time to stop one of Savage’s knife from killing Cisco. Cisco thanks teh Flash by calling him Barry thus forcing Kendra in on her secret.

Back at STAR Labs, Kendra has no clue who Savage is despite knowing her. The knife that Barry caught is ancient, dating back to ancient Egypt. This only adds to the mystery and danger. Barry decides to move her to Star City and get Team Arrow’s help as they have experience with magic. Cisco wonders if they have time to help.

Meanwhile in Star City, we see the Green Arrow, Speedy and Diggle trying to take down one of Darkh’s warehouses. When Darkh starts to use his powers against the Green Arrow, the Flash comes in and saves Team Arrow.

Diggle trows up a bit when they all stop while Thea is hilariously shocked that they know the Flash. 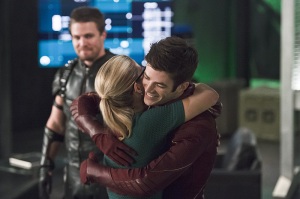 Back at the Arrow Cave, Barry is impressed while Cisco isn’t happy that Felicity hasn’t followed his specs. Felicity and Barry hug but at the same time she is a bit pissed at him for not telling her what Zoom did to her.

Barry, Kendra and Cisco explains that someone is after her but don’t know who. Barry does a quick sketch of Savage that Felicity, using facial recognition, found an image of an unchanged Savage from 1975.

Tam Flash and Team Arrow move their conversation back to Olicity’s loft where Oliver and Barry catch up, Cisco wants to come up with a better code name of Thea and Felicity is happy that Barry has found someone.

Cisco also tells Barry how he vibed on Kendra and saw her have wings. Both believe that she may be a meta human. But Cisco doesn’t want Kendra knowing about his vision or his powers.

The get together is cut short when Savage shows up telling Kendra that he will always find her. Barry flashes Oliver’s bow and arrow to him and starts shooting at Savage who simply deflects all the arrows. When Savage throws multiple knives that Barry stops using his speed. Thea joins in the fight and her arrows strike Savage who goes over the edge of the balcony. Oliver isn’t happy with Thea but she says she ended it. Or did she. When Oliver and Barry go to the balcony, they don’t see Savage’s body. 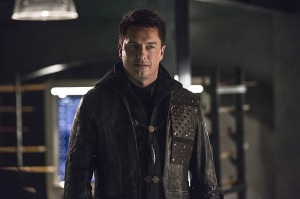 Back at the Arrow Cave, Malcolm and the League of Assassins arrive to tell Team Flarrow that the man they are seeking is Vandal Savage, an immortal around during the times of Julius Cesar and Ghengis Khan. Cisco comes clean to Kendra about his vision.

Kendra is having a hard time taking everything in and goes outside for some fresh air. Cisco joins her but their talk is cut short when a man with wings swoops her up and drops her off at a rooftop. This man calls her Shayera too and is here to protect her. The man explains his name is Khufu and she just needs to emerge to remember their life. We see Kendra get flashes of their time in Ancient Egypt getting quite cozy with each other. Before their conversation can go any further, the Green Arrow and the Flash track Hawkman down. Eventually, the Flash manages to take him down and bring him back to the Arrow Cave.

Hawkman explains that his name is Carter Hall but he was Prince Khufu and that Kendra was Shayera. They are soul mates that are destined to always find each other. Their lives are tied to Savage. Each time Savage kills the couple, he gets stronger. So far Savage has killed Carter and Kendra 206 times over the last 4000 years and Carter isn’t about to make it 207. 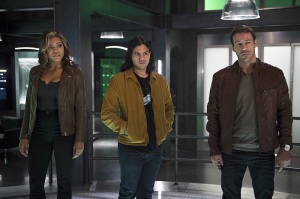 Team Flarrow believe Carter. On a rooftop, Carter says the only way for Kendra to emerge is that she needs to fall off the roof so her wings emerge. Carter pushes her off but Barry runs to bring her back to the roof top when it doesn’t seem to work.

Back at the Arrow Cave, Malcolm emerges from the shadows, making Barry wonder if that is his only way to make an entrance, to say that Savage is after the staff of Horace. Felicity determines that it is in Central City in a church. Oliver believes the staff is the reason why Kendra was drawn to Central City.

Back on the roof top, Kendra tries again despite Cisco’s reluctance and jumps off the room. Kendra’s wings emerge and she makes an awkward landing. Cisco dubs her Hawkgirl. It is sweet how Cisco cares for Kendra but unfortunately, he doesn’t have a chance since she and Carter are soul mates and are going off together in Legends of Tomorrow and from the previews of that show, it looks like they are a couple. Let’s hope Cisco gets a love interest that sticks around.

Meanwhile at the Central City church, Savage has the staff and starts using it to fight the Green Arrow and the Flash, Proving too much, Savage blows up the church while Oliver and Barry barely escape. It now becomes all hands on deck as Diggle, Thea and Felicity all head to Central City to help Oliver and Barry defeat Savage while Laurel will meet up with them as she is in town visiting her mom.

Back at Jitters, Barry and Oliver are in line for coffee when a young boy bumps into them dropping his Flash figure. Oliver picks up the toy and gives it back to him. When Oliver sees the boy run back to his mom, he recognizes the woman as his ex-girlfriend who says lost his baby. Oliver slowly realizes that the young boy is most likely his son.

Tomorrow we get part two where the Black Canary will join the fray!