This episode of Supergirl was supposed to air next week (hence the Thanksgiving theme) but because of the events of Paris last Friday, the episode “How Does She Do It?” hit too close to home so that episode will air next week.

But “Livewire” we get Helen Slater who was the original film Supergirl and played Lara-El aka Kal-El’s mom on Smallville and even shared scenes with that show’s Supergirl (Laura Vandervoort). Slater plays Kara’s foster mom and Alex’s mom, Eliza Danvers, a scientist in her own right, who has come to National City to visit her girls.

Another person from the Superman universe that is also in the episode is Dean Cain, who of course played the Man of Steel himself in Lois and Clark: The New Adventures of Superman. Here is plays Jeremiah Danvers, father to Alex and foster father to Kara and also a scientist. Of course, Cain also appeared in a season 6 episode of Smallville.

Thanksgiving at the Danvers 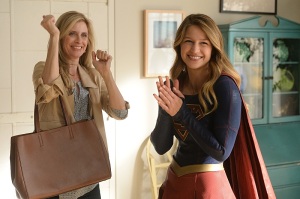 Alex is fretting that Kara isn’t at her place to greet their arriving mother. But Kara has her hands full defeating a female alien that looks like a male wrestler/bodybuilder.

When Kara gets back home, Alex correctly guesses that her mom would give her a hard time for not looking after Kara.

Eliza isn’t happy that Alex allowed Kara to become Supergirl. Kara wants Alex to tell Eliza about her work with the DEO but Alex is reluctant to do so.

Over, Thanksgiving dinner, everyone starts to say what they are thankful for and when it is Winn’s turn (Kara invited him over to save him from Thai food and an Orphan Black marathon), James’ gives Kara a call. James’ is in Ojai spending Thanksgiving with Lucy. James called Kara because he knew she needed a friendly voice amongst the family drama.

Little does he know that the family drama was just about the begin when Alex blurts out that she works for the DEO.

Eliza and Alex have a talk where the former explains why she is so hard on the former. Eliza calls Alex her Supergirl,

Our villain of the week is a metahuman Leslie Willis, a shock jock with CatCo. Leslie gets into trouble with Cat for going on a diatribe about Supergirl’s worth. Cat wants her to lay off and as punishment demotes Leslie to being the eye in the sky afternoon rush traffic reporter.

Leslie is in a coma with Cat wondering how long is appropriate her visit should be. After Cat and Kara leave we see that Leslie has developed white hair and sucking up power like nobody’s business. 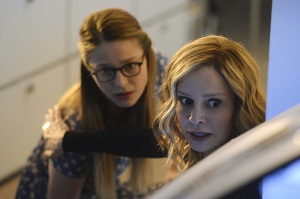 Because of Livewire, there is a city-wide power outage. Kara is back at work to help Cat get her computer up and running again. Livewire arrives to attack Cat. Cat gets Kara to go get security. Kara leaves and Supergirl arrives. The two women battle it out and Livewire absorbs her heat vision. Eventually, Livewire shorts out Cat’s elevator forcing Supergirl to let her go so she can save Cat.

Afterwards, Henshaw arrives and Kara tells all she knows about Livewire. Cat calls Henshaw Agent Mulder (he goes by the name Monroe) and wants to know what is going on.

Later, Cat and Kara bond over their mothers or in this case Kara’s foster mom, and their dynamics. When Cat learns that Kara’s parents died in a fire when she was young, it seems to move Cat. Cat then asks Kara to ask the FBI to get in contact with Supergirl.

When Supergirl goes to see Cat, the two decide to team up to get Livewire. At the DEO, Henshaw and Alex give her a device to capture Livewire’s electricity to bring her down so they can bring her in.

The trap is set with Cat airing a message over the radio to Livewire. At their meeting point, Livewire and Supergirl go for round 2. When Livewire kicks away the device, Supergirl then takes down Livewire by dousing her with water.

The next day, Kara gives Winn some Thanksgiving leftovers and tells her that his dad is in prison and what he is thankful for is that she included him in her family celebrations. And that Winn is thankful for her, giving a kiss on the cheek that to me, Kara seemed to have liked. I really like Jeremy Jordan on this show. Jordan is so cute as Winn that I really would love for him and Kara to get together instead of James and Kara.

Later, Cat wants to forgo the usual tabloid photos that would have gone in the paper but instead wants to do a photo spread of people volunteering their time during Thanksgiving. Cat also feels like she wants to get to know Kara better.

As Jeremiah and Eliza get some alone time, a young Kara and Alex take to the skies for a little night time flying. When they arrive home, Jeremiah and Eliza aren’t happy with his girls and berates them that someone could have seen them. Both realize their mistake when there is a knock at the door. It is Hank Henshaw.

Henshaw wants to take Kara to study her as Superman isn’t being cooperative. Eliza and Jeremiah refuses to hand over Kara so instead Jeremiah offers himself. Jeremiah tells Henshaw that he will bring all the research and knowledge has has on Superman and Krypton to his work with the DEO. And I squealed with Cain uttered Superman.

Back to the present, as Eliza’s visit draws to a close, she reveals to Eliza and Alex that Jeremiah didn’t die in a plane crash but that he was working for Henshaw and the DEO.

Later at the DEO, the make no fuss when Henshaw barks orders. The sisters vow to find out what happened to Jeremiah.

If there is one thing that I am enjoying about Supergirl is Calista Flockhart as Cat Grant. Her Cat Grant is funny, fiercely independent and accomplished woman. This is a better version of the character than the one in Lois and Clark, where that version liked to use her sexuality and the one in Smallville was more of a naive or too sweet reporter.

Another thing that I actually kind of bothers me is using Jay Jackson as a National City news anchor. After spending 7 seasons watching Jackson play Perd Hapley on Parks and Recreation, everytime I see him, I want to call his newscast “What’s the Word with Perd”.

Seeing Slater and Cain makes me really hope Supergirl, like Smallville before it, does bring back people from the Superman cinematic universe. I hope to see, if it fits the storytelling, the following people guest star: Marc McClure, Margot Kidder, Teri Hatcher, Erica Durance, Allison Mack, Justin Hartley, Cassidy Freeman, Tom Welling, Annette O’Toole, Jonathan Schneider and Michael Rosembaum. Heck, I even will take Kristin Kreuk (thanks to Beauty and the Beast, my aversion to her is over).