It’s been months since I’ve seen the Supergirl pilot way back in July at San Diego Comic Con 2015 so it’s been a long time (at least for me) that I’ve seen a new episode.

While the second episode didn’t have the special effects budget of the pilot, the show still managed to maintain the quality of the first episode and Melissa Benoist is still a winning Kara/Supergirl. 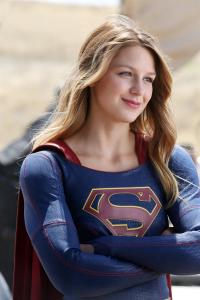 The episode starts with Alex, Henshaw and the DEO putting Supergirl through a battery of test to see the limits of her powers. When Winn alerts Supergirl of a fire near the docks, she goes flying to the rescue despite Alex telling her not to.

At the docks, Supergirl uses her super breath to put out the fire but makes it worse. Instead, Supergirl decides to move the oil tanker away from the fire before it can explode. However, Supergirl’s strength causes a rip in the tanker and oil starts spilling in the river.

News reports start calling Supergirl a disaster and all saying that Superman wouldn’t have made such a mistake. However, all agrees that Supergirl and Superman cause the same type of destruction. This destruction is something Maxwell Lord wants to prevent from happening to National City that has befallen Metropolis, so he starts a clean-up fund. 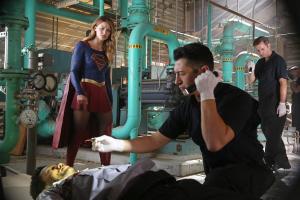 The Fort Rozz escapee of the week is a Hellgrammite, a humanoid insect that has attacked a chemical plant. When the DEO investigates, Supergirl is there too and recognizes the stinger on one of the bodies as belonging to a Hellgrammite. Kara flashes back to her time on Krytpon and hears her mother talk about having to put a Hellgrammite away.

Back at the DEO, Alex train Kara to fight using a room lightly lined with Kryptonite. Kara doesn’t think she needs any help but Alex says that she does. Alex is able to get the better of Kara while trying to give her advice. Eventually, Alex gets the upper hand and Kara surrenders. 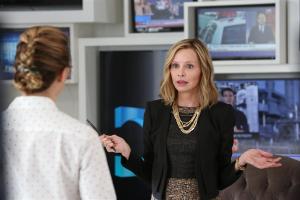 Kara returns to work looking all dejected. Cat is still after the interview with Supergirl and Kara doesn’t understand why if she is just going to keep on putting her down. Cat tells Kara that Supergirl is being too reckless, taking on too much. Cat talks about how she started off small to become who she is today. Cat mentions how she started as Perry White’s assistant to then writing for the gossip column to eventually starting CatCo.

This speech inspires Kara to start her hero training. Winn and James (who are both not really happy that Kara told them each her secret) start pointing her to do small saves. These small saves seem to have turned National City’s opinion of Supergirl around as seen by a news report given by one Perd Hapley (Jay Jackson). If you are a Parks and Recreation fan then you know who I am talking about.

Alex pays Kara a visit and isn’t happy that Winn and James knows her secret.

Meanwhile, General Astra and Non meets up with the Hellgrammite and orders him to go after Supergirl.

At the DEO, Alex and Henshaw figure out that the Hellgrammite isn’t stealing chlorine to make a bomb but for food. So the DEO set a trap that works but when Supergirl doesn’t show up, he takes Alex instead. 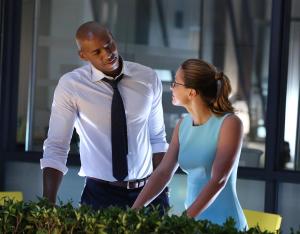 The reason why Kara wasn’t there was because she was with James, agreeing to do an interview with Cat so he wouldn’t be fired (Cat threatened to do so if James didn’t come through). James thought that by coming to National City he can become his own man and not just Superman’s friend. Kara says if she has learned anything through her ordeal is that there is no shame in asking for help. Kara then tells James that the S on her chest not only is the crest for the House of El but also means stronger together.

Henshaw then calls Kara to let her know what happened to Alex. Kara isn’t happy that Henshaw didn’t ask for her help and takes off using her super hearing to eventually find Alex in a warehouse.

In this warehouse, Astra makes her presence known but Alex thinks this is Alura. Astra explains that they were twin sisters and that she has come to Earth not to destroy it but save it. By the way, we should note that when Benanti plays Astra, she will have a silver streak in her hair and when she is Alura, she will have none.

Supergirl arrives and is shocked to see her aunt alive and well as she thought she died on Krypton. Astra explains how Alura sent her own sister to Fort Rozz and is still pissed about it. Aunt and niece fight using their powers against each other like their strength and heat vision. While that is happening, Alex manages to defeat the Hellgrammite by kicking him in the groin (apparently doesn’t matter what species you are, the groin is in the same place for all males) and kills him using his own stinger.

Eventually, Supergirl manages to use Astra’s own strength against her to take her down temporarily. When Astra emerges from the rubble, it looks like the fight will continue but Henshaw comes and subdues her with a Kryptonite blade.

After returning to the DEO, Alex thanks Kara for saving her and the two sisters come to an understanding of believing in each other and helping each other too. Alex then takes Kara somewhere to show her something. Alex explains how her cousin has a Fortress of Solitude up in the arctic that gives him information on his home world and an AI version of his father. So to help Kara, Alex has a room in the DEO that’s her own Fortress of Solitude. In the room is an AI of Alura, a program that was found in Kara ship.

Alone with Alura, Kara wants to know more about Astra when she couldn’t get a hug. One thing for sure Kara welcomes this AI of her mother unlike Clark in Smallville who really despised his AI father Jor-El.

Alex thanks Henshaw for setting the room up and he replies it is the least he can do for Supergirl. As Henshaw turns away from Alex, we see his eyes grow red. I am not sure what this means. Henshaw is supposed to eventually become the villain Cyber Superman. Or does the red eyes mean he could possibly be the Martian Manhunter Jonn Jonzz. Just spit balling theories here.

Back at Astra’s HQ, a scientist pulls out the blade and studies it and notes it is not from Earth. Astra still feels sick around and asks for it to be removed. Astra then speaks to a man with a British accent, I am guessing Non, that until they can figure out more about this weapon that can hurt them, their plan for National City is on hold.

At episode’s end, Cat finally gets her exclusive with Supergirl!

The second episode of Supergirl definitely is better than the pilot and I do look forward to seeing the show develop.

Also, as a fan of Superman, having a show where I can just hear the names Lois Lane, Clark Kent, Perry White, the Daily Planet and Metropolis again is my kind of show!