I am back this week to recap Arrow after being away on business. Thanks to Chappell for stepping in for me in recapping last week’s episode. One thing this week’s episode finally delivers is the return of the Canary Cry!!!!

Oliver has taken the woman from the field to the airplane hideout that he shared with Slade and Shado. Oliver gives her tips on how to survive without being detected and tells her that he is going back to camp. At camp, Oliver explains to Conklin what happened and that he killed the woman. Conklin askss for proof so Oliver leads him to the cave that was his initial home on the island where there is the body of the woman, who is pretending to be dead. After Conklin gets his proof that Oliver is indeed a cold-blooded killer, he leaves. Oliver wakes up the woman and explains how he wasn’t always alone on the island. Meanwhile, Conklin finds Oliver’s comms system back to ARGUS and now knows Oliver is up to something.

Felicity thinks that the mysterious texts she’s been getting were pranks from Curtis but he says it wsasn’t home. But Curtis notices the text is old Palmer technology code. Curtis figures out that it is tied to Ray’s final few moments and believes he left a message for Felicity but needs the password to get to it. Felicity does know the password but doesn’t want to hear the voice of her ex. However, when Curtis mentions that he would do anything to hear the voice of his late brother again, this does convince Felicity to eventually hear what Ray had to say (but we the audience don’t). I agree with Curtis. I too would do anything to hear my parents voices again. 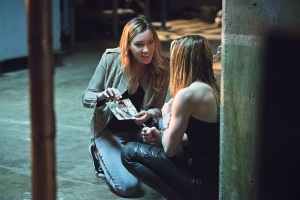 Laurel has returned from Nanda Parbat and is now stashing Sara in the basement of her building. Laurel tells her father what she has done and brings him to see Sara. However, this Sara isn’t the one that we knew; this one is more feral. Laurel shows a family photo to Sara and this gets her to talk. But Sara uses her chains to choke Laurel that Lance has to subdue Sara. Laurel believes that it will take time for Sara to be back to normal.

Lance goes to see Darkh to get his advice on what to do with Sara. Darkh advises Lance to put Sara down like a dog as she isn’t his daughter. We see Lance return to the basement and looks ready to pull the trigger but Laurel stops him.

When Laurel goes to give Sara something to eat, discovers that she is gone.

Oliver tells Team Arrow that he is running for mayor in his new campaign office, which was Blood’s old offices. With the exception of Felicity, everyone is skeptical about his candidacy like experience and money. The money is covered thanks to Felicity and Oliver believes that he can be a good mayor because he wants to save Star City.

With Team Arrow not taking the news how he would like, Oliver gets them excited when he reveals the new Arrow Cave and it is awesome and spacious and awesome. Thank you Cisco and STAR Labs for the new lair.

The criminal of the week are a group of corrupt SCPD cops led by Liza Warner (Rutina Wesley) who steal drugs from gang bangers to sell back to them. Their reason is that Star City is dying so they need to take care of themselves so they can have a good life.

At the first crime scene, two cops were shot dead and a SIM card was left behind. Lance is forced to go to Team Arrow for help because of lack of police funding. During his visit with Lance, Oliver asks him for his support for his run for mayor. Lance laughs at Oliver’s candidacy.

The SIM card leads Team Arrow to a warehouse where they discover the thieves were cops.

Team Arrow decides on a sting operation to lure the thieves. Thea procures the drugs while Green Arrow, Black Canary and Lance await for the thieves to arrive. They do arrive but when Black Canary tries to use her Canary cry, the thieves had some device to tamper it. The thieves get away and Lance immediately relieves these thieves were using weapons from the anti-vigilante task force.

Lance is invited into the Arrow Cave and gives Felicity access to the SCPD database to get what she needs. While trying to find the thieves on camera, Oliver sees Lance’s meeting with Darkh.

Oliver confronts Lance for being a hypocrite. Lance explains why he is working for Darkh and Oliver tells him that he needs to stop hiding behind his daughters.

The thieves realize that Lance is a problem and kidnap him from Laurel’s apartment. The group forces Lance to access the SCPD storage unit that houses a whole bunch of drugs set for destruction.

Team Arrow arrive and Black Canary’s cry has a new frequency that manages to take out one of the thieves. Eventually, Team Arrow take out the thieves but Warner stabs the Green Arrow and threatens to kill him unless Lance lets her go. Lance gives a speech about how they can make the city better and how they all have to do things they regret because they think they are doing the right things. Lance’s words gets Warner to relent and off she goes to jail.

Later at Lance’s apartment, Oliver thanks Lance for saving his life and asks him to be his spy on the inside within Darkh’s inner circle. I am wondering that you can’t hide anything from Darkh and it is Lance that is in the grave.

The next day, Thea has staffed Oliver’s campaign office and wrote Oliver announcement speech. This speech is a rehash of his season 1 opener voice over but in a more hopeful tone.