Survivor Cambodia: Second Chance Episode3 “We Got a Rat”

This season of Survivor is getting crazier with each episode. This episode a new twist shakes up the game in a way that has never been seen before. Some castaways will benefit from the twist while one will be eliminated because of it.

When the TaKeo tribe returns back to camp from tribal council, Spencer tells his tribemates that he is willing to change and improve his social game. Terry Deitz is very pleased with his own social game this time around. He’s proud that he was able to be the one to who could convince Abi to side with his alliance to vote out Shirin. 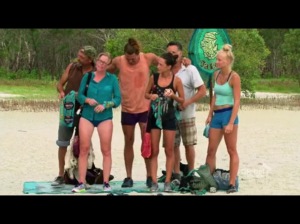 The tribes meet up with Jeff Probst for what they believe is a challenge. Probst makes sure to ask them how they feel about their current tribes. He asks if getting rid of Shirin was a positive move for the TaKeo Tribe. Varner and Woo think the team will be more unified. Kass tells Probst that she feels great about Bayon, even calling it the “Love Tribe”. Probst says although it’s good that the tribes are happy, this is the perfect point in the game to change things up. Both tribes are shocked when Probst tells them the tribes are swapping this early in the game. For the first time in the history of the show, the tribes are going from 2 tribes to 3 tribes of 6. Andrew Savage is nervous about the twist. He is in a good position in his current tribe and he doesn’t think the swap would be beneficial for him. The Survivors do a random draw to decide how the tribes will be divided. The new Bayon Tribe consists of Monica, Jeremy, Fishbach and Kimmi from the original tribe. They are joined by Kelly Wiglesworth and Spencer from TaKeo. Kelley Wentworth and Terry stay at TaKeo. Joining them are Kass, Ciera, Keith and Joe. The 3rd and final tribe is Angkor. The members of this tribe will be given supplies and a new beach, but they are forced to start completely over gathering food and building a shelter. This tribe consists of Tasha, Savage, Varner, Woo, Abi-Maria and Peih Gee. Andrew Savage doesn’t feel overwhelmed about being on the Angkor tribe. Not only do they have to start over from scratch, but being from Bayon, he and Tasha are now outnumbered by their 4 new tribemates from TaKeo.

At the Angkor beach, Peih Gee tells us that she is happy she has the luxury of knowing that her alliance of Woo, Varner and Abi and herself could easily vote off Tasha or Savage in the event that they lose the next immunity challenge. Varner doesn’t like Savage. Woo pleads with his alliance that they stay strong to move forward to take out the two former Bayon members. Seeing that they are in trouble, Tasha and Savage disappear into the jungle to formulate a plan. Tasha tells him that if they remain strong they might be able to convince a couple of the members of the other alliance to go with them into the merge. Tasha plans on winning the game despite the not-so-great cards she was dealt.

The new TaKeo tribe is happy to be together. Terry notices that his tribe should be able to do well in the challenges. After all, Joe, Keith, and Terry have won over 10 individual immunities between them from their past season. Joe prepares chicken for the tribe. Kass and Ciera think they got really lucky with their new tribe. They are in the majority alliance and they should be able to perform well in the competition. Kelley Wentworth knows that if the TaKeo tribe loses, herself or Terry will be in danger of being voted out. She decides to throw Terry under the bus. She lies to Ciera and Kass, telling them that Terry has spent a lot of time searching for The Hidden Immunity Idol. In actuality, there is no way Terry could have The Idol because Kelley has it in her bag. She wants to make him a bigger target in the event that they lose the next immunity challenge.

Spencer and Kelly Wiglesworth are getting adjusted to the new Bayon tribe. It’s very different than the Takeo camp. The tribe worked out well for Monica and Stephen. Both of them are happy with their position in the majority alliance with Jeremy and

Spencer makes a genuine attempt to be more social in the game. He and Jeremy bond, sharing stories of their relationships from back at home.

It’s raining at Angkor. The weather is really bad and the tribe doesn’t have food. This does not faze Tasha at all. She notices that there is some friction between Abi-Maria and Peih Gee and plans to use that information to her advantage. She tries to get Abi and Varner to align with her. Abi seems receptive, but Varner doesn’t feel good about it. He doesn’t like that Tasha and Savage are plotting and scheming to convince his alliance to turn on each other.

Fishbach’s mind is on the Hidden Immunity Idol at the Bayon camp. He recruits Jeremy and Monica to help him search the island. His goal is to find The Idol and use it to strengthen his alliance. The three search everywhere and ultimately, Jeremy locates the clue to The Idol. Similar to the first Idol that was found by Kelley Wentworth, this one will be hidden at the upcoming Immunity Challenge. Jeremy doesn’t share this information with anyone.

The Immunity Challenge is familiar to a few of the current players. Kass Tasha Spencer and Woo all competed in this challenge in Survivor: Cagayan. The details of the challenge aren’t really important so I’ll just cut to the chase. Joe and Terry dominate as they knew they would. Jeremy discreetly finds the hidden immunity idol and both TaKeo and Bayon win immunity tribal immunity. Now, this is when it gets interesting. As Probst announces the winning tribes, Tasha notices Varner mouthing information to his former tribemate, Kelly Wiglesworth. She jumps right in front of Varner to block him. Varner claims that he was only looking at Wiglesworth and Tasha overreacted. By outing him at this moment, Tasha and Savage shed light on the fact that Varner has been double dealing. Woo is disappointed. He feels like Varner is no longer valued as one of Jeff Varner’s alliance members.

At Angkor, the tribe dynamic is flipped upside down. Andrew Savage goes to Peih Gee and Woo he wants them to vote with his alliance to take out Varner. Peih Gee doesn’t know if they should trust Tasha and Savage. Abi is very ready to turn on Varner. She thinks it will be an easy vote. She goes to Peih Gee and Woo to tell them her decision. She knows she is on the bottom of her alliance and doesn’t mind aligning with Tasha and Savage. This really upsets Peih Gee. Peih Gee thinks the best plan would be to vote out Abi-Maria instead.

At Tribal Council, it is still unclear who would be going home. Jeff Varner is surprised that despite the craziness that happened at the Immunity Challenge, he might be safe for the night’s elimination. Varner denies that he was being a rat. Tasha disagrees. Savage and Tasha have somehow made their way to the top of the food chain. They are in control of the vote. Varner, Abi, or Peih Gee will be going home. Peih Gee and Abi vote for each other. No one votes for Varner. In the end, Peih Gee receives 4 votes and is the 3rd person voted out of the game.