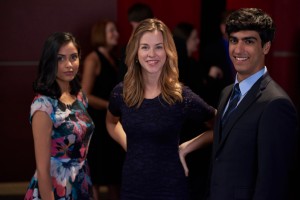 Before we get to the newbies, Dawn calls in Patrick, Alex and Maggie and other doctors of Hope Zion to her office. Dawn starts handing out application forms for a prestigious fellowship that comes with a cash reward that lets the winner do research over the next two years. Maggie didn’t get an application form because she is leaving for Cleveland but was paged into Dawn’s office for a favour, which brings us to….

Maggie is the first one to get introduced to our new trio as Dawn asks her to give them a tour of the hospital. All the newbies stand in awe when a stop of the tour includes the OR. Maggie is a bit distracted as she prepares for he big move to Cleveland. While Alex will miss Maggie, she plans on visiting her and gives a file filled with stuff they can see in Cleveland such as the Rock and Roll Hall of Fame, the world’s largest hand stamp and a building that looks like a picnic basket. As Maggie starts to prepare her life in Ohio like getting her driver’s license, she gets a phone call that tells her the funding for her job fell through so she is now staying at Hope Zion.

Alex tries to get Maggie to fill in the application form for the fellowship but Maggie says it’s too late for her to do so. Alex has to drag Maggie to the fellowship dinner later that evening (see Fellowship Dinner for more).

Zach’s patient is Angelo, who he doesn’t recognize as one of Hope-Zion’s janitors. Angelo has a really bad elbow that has tons of bone fragments in it. Charlie says he can try and piece the elbow together or he can give him a brand new elbow. Either way though Charlie and Zach recommend that he cannot continue his job as a janitor. However, that is not an option for Angelo.

At first, Zach is a bit aloof with Angelo until he learns that he was poker pals with Joel and that the late Dr. Goren owed him $100 because he passed the LSAT. Clearly, Angelo is a very intelligent mand and dismisses Zach as a rich boy. However, Zach says he comes from a working class family and that his father worked in the steel factory for over 35 years. The two start to bond because they are both from Sault St. Marie and over their friendship with Joel. Later, Zach gives Angelo the money Joel owed him and a bit more that would allow him to start his law school education. Angelo then invites Zach to the Hope-Zion Saturday poker game.

It seems that Patrick might have a history with one of the newbies as he quickly hides from them when Maggie was giving her tour (see Fellowship Dinner for more).

Patrick’s patient (I am calling him that now instead of Curtis) is Ava who suffers extreme pain when someone touches her face.

Shahir is called in for a consult. Beforehand though, Shahir asks Dawn’s help in determining what’s wrong with his heart as he had a cardiac event during sex with his boyfriend.

Back to Ava. Shahir determines that Ava has some sort of nerve condition that is causing her pain and she has two options: 1) drug therapy that will help ease the pain 2) surgery but it could result in paralysis. Ava opts for surgery because before all of this she was about to move to Paris to be with her boyfriend. The surgery allows Ava’s boyfriend to touch her without her being in pain. 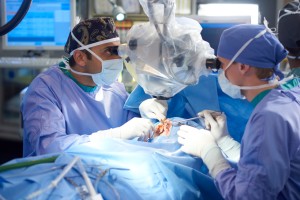 During the surgery, Patrick is buttering up to Shahir because he is on the jury of the fellowship. Shahir goes over Patrick’s impressive resume until he questions him about an 18 month gap; Patrick deflects as he wants to concentrate on the surgery.

As Ava is in recovery, Shahir wants Patrick’s help in breaking up with his boyfriend until they are alerted that something is wrong with Ava.

When they get to Ava’s room, her left arm flails uncontrollably while at the same time Shahir’s heart rate is elevated. Shahir manages to stop Ava’s arm from flailing by placing a water bottle in it. Shahir determines the nerve condition was hiding that Ava has multiple scleroris.

Later on, Dawn determines that Shahir is find and that his heart rate went up due to stress. We learn that Shahir’s boyfriend said he loved him but he didn’t respond back. Dawn encourages him to tell his boyfriend how he feels.

Back at Ava’s room, Shahir encourages Ava not to give up on love or her boyfriend because she now has MS.

The episode opens with Luke standing and Alex feels that he is going to take his first steps any moment. Charlie has to pick her up to get her to leave home.

The only thing Alex wants to do is get her work day done so she can go home and see her son take his first few steps. Because of this, Alex is at first a bit rude to her patient Ralph Lively, a colon cancer survivor, suffering from abdominal pain. 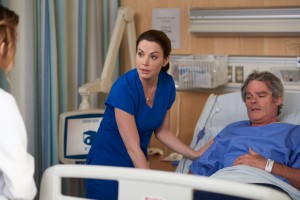 Alex enlists Cassie to assist her on the surgery even though she tried to pass it to Dev. When Ralph meets Cassie, he is taken aback at how young she looks and hopes she doesn’t make a mistake. Cassie determines that Ralph is suffering from gallstones.

While prepping for the surgery, Charlie comes to show Alex video of Luke taking his first steps and she is heart broken that she missed it. But this doesn’t stop Alex from doing her job or teaching Cassie during the surgery. When Alex gets Cassie to do a part of the procedure, things are going ok at first until she nicks something and bile starts to fill the cavity. Cassie is shocked at what she did and leaves the surgery leaving Alex to do a quick stitch to make Ralph stable before taking to Cassie. Cassie admits to being frightened at doing the surgery and Alex said they all had moments like that but she can’t just abandon her patient. With that pep talk, Cassie and Alex goes back into the surgery and finish up.

Later, Cassie visits Ralph to apologize for her error but Ralph is okay with everything because he is going to be okay. Alex checks up on Ralph and apologizes to him for being so distracted to start. Alex admits that she wanted to see her son’s first steps but missed it. Ralph says when he got diagnosed with cancer he was worried about missing the milestones of his three daughters but it’s not about missing milestones but that he will be there for the start of something great and the same will be for Alex.

Cassie over hears that and tells Alex that while she may have missed her son’s first steps, she was there for hers.

Throughout the episode, many of the characters note how happy and chipper Dawn seems to be. Shahir notes that Dawn is an amazing woman and wishes that a man would see that too. We see that there is a man that is putting a smile on Dawn’s face as he comes to escort her to the fellowship dinner. This man has no name yet but according to IMDB it’s Lane Berkely and is played by Shaun Benson who I remember from CTV’s The Associates. One thing I am curious to know about Dawn is if she is still the foster mom to Giselle? I hope so. 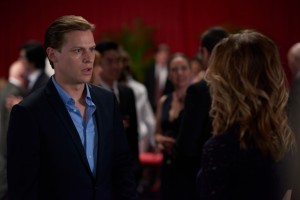 Here is what we learned at the fellowship dinner: Shahir has a date with his boyfriend Jonathan later that night, Patrick still won’t say why he has an 18 month gap and he has an obvious history with Cassie who slapped him on the face when he sees him again. I wonder what sort of history they had or have? A romantic one that turned south? A medical school rivalry? Let me know your thoughts in the comments. 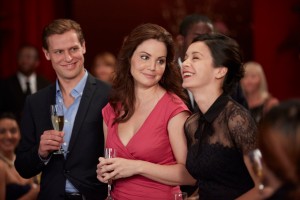 And who is up for the fellowship? Two doctors from Hope-Zion that we don’t know, Patrick, Alex and Maggie. Patrick and Alex owe Dawn 50 hours of free overtime for Maggie’s late application.

Later on Alex and Maggie discuss being in competition with each other with both proclaiming they each will win. I have to say that Erica Durance was looking quite beautiful in tonight’s episode.

Most of this story tonight is about helping prove Tom’s innocence. In the morgue, using a CPR dummy, Charlie asks Tom to recount what happened the night Amy died. Tom recounts coming home and finding her in the bathtub and trying to pull her out and give her CPR. Charlie mentions that Amy had a skull fracture that Tom explains was a result of him putting Amy down roughly on the bathroom floor.

To show how Canadian this show is, Tom talks about using his ghost abilities to sneak into a Toronto Maple Leaf game. When Charlie says he shouldn’t waste that gift on the Leafs, Tom said better them than the Oilers and talks about 1988, the year Gretzky got traded. That conversation has no bearing on proving his innocence.

Tom’s story about how Amy got her skull fracture doesn’t add up to Charlie. Tom admits that he shook Amy because he was angry at her. Tom says he spent half his marriage on suicide watch and when he goes out for an hour, he comes home to his wife drowned. Despite his anger, Tom says he loved his wife. It seems unclear that Charlie will continue to help Tom or not.

Since Travis Milne’s arc is almost over, I have a feeling that Charlie will prove is innocence and Tom will wake up from his coma and be set free.

Since I am Canadian, wishing all my recap readers a Happy Thanksgiving and see you next week!