After thousands of votes and months of anticipation, the premiere of the 31st season of Survivor aired this week. By the end of the 90-minute season premiere we see our first Second Chancer voted out of the game. I was very surprised to see this castaway eliminated from the competition, but in a game full of All-Stars, nobody is safe.  So let’s get into it.

The scene is set. We get a montage of the castaways and also some of the most iconic moments of the last 15 years of Survivor. We see scenes from Borneo, The Australian Outback and other classic seasons of Survivor.  The castaways travel on land and water making their way to the site of the first challenge of competition. Abi-Maria reflects on some of the mistakes she made in The Philippines during her first season. She says that although making a ton of trouble her first season was a big mistake, she also enjoyed being a villain.

The castaways arrive in two pairs of boats, smack in the middle of the ocean where Jeff Probst is waiting to give them their first challenge. Jeff explains that all the returning players have been given a second chance at completing their goal from their first time competing. The contestants are already divided into their respective tribes. The TaKeo Tribe consists of Kelly Wiglesworth, Woo, Shirin, Peih Gee, Vytas, Abi, Terry, Jeff Varner, Spencer, and Kelley Wentworth in the blue buffs. Wearing the pink buffs, are Ciera, Tasha, Stephen Fishbach, Andrew Savage, Monica, Kass, Joe, Keith and Kimmi of the Bayon Tribe. Jeff Probst is standing on a boat that carries chickens, rope, fruit, pots, pans and other items that would be considered luxuries for when both the tribes get to their camps. Each tribe can grab as many supplies as they can and put them on a raft to claim as their own. The twist is that 100 yards away there is another boat with a huge bag of rice on it. The challenge ends when the bag of rice is captured from the other boat; the individual that grabs the rice wins the challenge for their team. 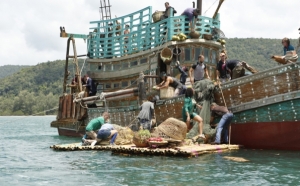 Right away the castaways start snatching items left and right off the supply boat. The first tribe to get on the raft and head toward the rice is TaKeo with Bayon close behind. Wiglesworth, a former river guide, swims ahead of the raft for TaKeo. Joe from Bayon realizes that their raft will not be able to catch up, so he too dives into the water to swim toward the rice. Just as Joe starts gaining on Wiglesworth, Woo from Takeo, notices that Wiglesworth’s lead is decreasing. He dives in, swims past her and captures the rice for TaKeo. TaKeo wins the first reward challenge.

At the TaKeo camp, the castaways quickly start building the shelter. Some members of the tribe are very focused on building while others are already strategizing. The first bit of drama starts brewing when Abi notices her bag is missing. She is very upset that her bracelet was in the bag and may have been stolen. Abi tells us that part of the game she wants to play right now involves controlling her emotions and her temper, but the missing bracelets are tempting her to revert back to her old, volatile ways.

At Bayon, the castaways are peacefully constructing their shelter. Jeremy quickly finds Keith to mend some burnt bridges from when the pair played together in Survivor: San Juan Del Sur. He also approaches Tasha, Savage, and Joe as possible alliance members. Jeremy tells us that his goal is to align with the other alpha males and stronger tribe members as a shield to make it far in the game. Stephen feels like he doesn’t fit in with his tribe, similarly to the first time he played in Survivor: Tocantins. He refers to himself as “a Fish-bach out of water” in a tribe full of “manly men”.

At TaKeo, Vytas tells us that last time he played he was able to manipulate the women of his tribe’s perspectives. He wants the women on his current tribe to think that he’s a nice guy, but Shirin feels like Vytas is “smarmy”. Her distrust of Vytas’s tactics causes her to start planting the seeds to turn the majority of the tribe against him. Jeff Varner is confused about how drastically the game has changed since Season 2 – The Australian Outback. When he played in Australia, there wasn’t nearly as much strategizing as there is this time around. 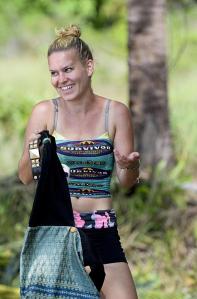 Abi, still looking for her bracelet, has started randomly checking her tribemates bags. She ultimately locates the bracelet in the bottom of Peih Gee’s bag. Upset, Abi tells a bunch of her other tribemates that Peih Gee was the culprit. When Peih Gee hears that Abi is telling nearly the whole tribe about the bracelet situation, she attempts to clear the air with Abi. Peih Gee tells Abi that she grabbed the bag thinking it was empty and had no clue the bracelet was inside. Abi tells Peih Gee she is giving her the benefit of the doubt this time.

Jeff Varner and Peih Gee head out to the water to strategize at TaKeo. Peih Gee would like to target Abi but Varner tells her that Shirin wants to go after Vytas. Jeff is torn between the “Old School” and “New School” groups of castaways. Elsewhere, Kelley Wentworth is out looking for The Hidden Immunity Idol under the guise that she is gathering palm fronds. After looking for quite some time, she instead finds a clue to the location of The Idol. The clue is a note that says The Idol will be hidden at the first Immunity Challenge. Now that she knows the location of The Idol, her dilemma will be whether or not she should risk attempting to grab it at the challenge.  Later, Kelley watches as Vytas teaches the tribe some yoga. She is turned off and annoyed by his flirting. Vytas feels like Abi is targeting him. He and Terry briefly agree that Abi should probably be the one voted off first because she is not well-liked by the tribe.

In the first Immunity Challenge of the season, the survivors are competing in the Quest for Fire competition. This was the first challenge ever run in the first episode of the series. Quest for Fire is familiar to Kelly Wiglesworth in that she competed in and lost this particular challenge in Survivor: Borneo. This is a chance for redemption. Meanwhile, Kelley Wentworth has her mind on the Immunity Idol that she knows is hidden at the end of the challenge. TaKeo takes an early lead in the challenge with Spencer lighting torches for their team. Keith is having trouble with his torches causing his tribe to fall behind. Bayon catches up at the final stage of the challenge. It requires both tribes to retrieve keys to unlock a gate to the finish line of the game. Joe and Kelly Wiglesworth are retrieving their respective keys. Kelley Wentworth notices where the hidden immunity idol is located and patiently waits for her moment to grab it. She can’t figure out a way of grabbing it without anyone noticing. Wentworth inches closer to The Idol but she’s running out of time. Joe and Wiglesworth are getting dangerously close to unlocking their gates. Both the tribes are so intently watching the competition that Kelley Wentworth has just enough time to grab The Idol and tuck it away for safe keeping. She grabs it and seconds later the TaKeo tribe has lost their first challenge. Joe successfully beats Kelly Wiglesworth in the challenge and has secured immunity for the Bayon Tribe. TaKeo must now go immediately to Tribal Council.

As the TaKeo tribe walks into the first Tribal Council, it’s not quite clear exactly who is going home. Jeff Probst and the castaways get right to it. There is a lot of discussion about learning from past mistakes and the difference between the “Old School” and “New School” mentality of playing Survivor. Abi talks about how she has been able to keep her attitude in check even though there have already been situations that have put her in a bad mood. Jeff Varner tells Probst that although certain tribe members claim they don’t know who to vote for, he believes that his tribemates know exactly what they are doing. Just as Woo is saying that he has no idea who he is voting for, Abi catches him exchanging glances with Vytas. She suspects Woo is voting for her. Wiglesworth thinks she too is picking up on the cues of who the tribe is voting for as well. Jeff Varner ends tribal council by saying he doesn’t want to screw up his second chance. This is an important night.

THE VOTES ARE IN

Vytas votes for Abi. Abi votes for Vytas. The decision is final. Spencer, Kelley Wentworth Peih Gee, Jeff Varner and Shirin also vote for Vytas and the tribe has spoken. Vytas is the first person voted out of Survivor Cambodia: Second Chance.

With Vytas being voted out it’s clear that this season is going to be a fun one. Vytas was very good in his first season – Survivor: Blood vs Water. I don’t think anybody believed that he had the potential to be voted out first but that just goes to show you. These All-Stars came to play.