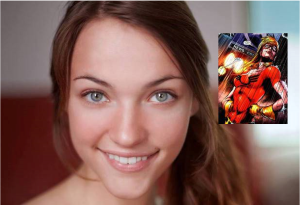 According to TV Line, the CW’s The Flash is adding another speedster to its line-up and this time it’s Jesse Quick, played by newcomer Violett Beane. Beane will appear in multiple season 2 episodes. In the show, TV Line reports that Jesse is a brilliant but quirky college student who gets caught up in the battle between The Flash (Grant Gustin) and Professor Zoom.  In the comic books, DC Wiki describes her as “the alter-ego of Jesse Chambers, a heroine with super-speed powers. Chambers is the daughter of Golden Age heroes Johnny Quick and Liberty Belle; she would later go on to adopt her mother’s name. Her speed powers are accessed by speaking a special formula, although she also has her mother’s abilities.”

Comingsoon.net also reports that Demore Barnes, whom we remember here on CTV’s The Associates, has been cast as Henry Hewitt, aka the villain Tokamak. The article writes that Hewitt in the comicshas energy absorption powers and was a manipulative businessman. In the series he’s described as “a charming, but cocky scientist who was affected by the same Particle Accelerator explosion that created the Flash. When Caitlin Snow (Danielle Panabaker) recruits him to join the team at S.T.A.R. Labs, Hewitt jumps at the opportunity to fulfill his destiny as a powerful meta-human.”

In other news, fan favourite Malese Jow will return for multiple episodes in season 2. Entertainment Weekly reports that Jow will be seen as Iris’ colleague at Central Picture News and her past relationship with Barry will put both Iris and the Flash in unexpected danger.

As a reminder, Jow first appeared last season as a love interest for Barry and while the relationship was short-lived the two parted amicably much the disappointed to us here at Pop Goes the World. Could Wally West joining the show be a reason why Linda Park is back too? In the comics, Linda marries Wally. Time will tell but if this brings Jow back, then we are all for it.