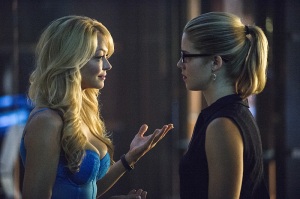 Charlotte Ross’ Donna Smoak will be coming back to Star City, TV Line exclusively revealed. Of course, Donna paid daughter Felicity (Emily Bett Rickards) a visit a couple of times last season. Donna’s last visit had her encouraging her daughter to not give up on Oliver (Stephen Amell).

Ross is expected to appear in Arrow’s sixth episode of season 4 and maybe have a fling with Captain Lance?