For this week’s recap for Arrow, I want to preface this in saying that my PVR only taped 13 minutes of this so I had to watch “The Fallen” on the CTV Go app and I watched it several days ago. I think I captured the important bits of this episode.

Oliver, Maseo and Tatsu are at the army base and see General Shreve arm the Alpha Omega. Oliver steals a car to follow the military transport van that they think contain the bio weapon. When they attack the military van they find that the weapon wasn’t on board. An injured soldier tells the trio that it is in a food cart in Hong Kong.

Back in a busy Hong Kong market, they see the bio weapon ready to be used and a fight ensues unfortunately the vial that contained the Alpha Omega falls to the ground and shatters. We see the weapon start to emit fumes in the air.

Oliver finds a bleeding Thea in the loft and take her to the hospital. The doctors do manage to save Thea but tell Oliver that maybe it is best to pull the plug as things don’t look good. 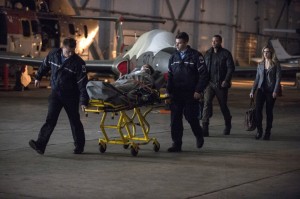 Oliver refuses and decides to take Thea to Nanda Parbat but Malcolm warns that Thea won’t be the same after emerging from the waters of the Lazarus Pit. And Team Arrow (minus Laurel) are going on a road trip to Nanda Parbat.

To get there, Felicity asks Ray to borrow his jet and the two break up as Ray realizes that Felicity is still in love with Oliver.

On the plane ride to Nanda Parbat, Oliver confesses to Felicity the time he returned to Starling City when he was supposed to be on Lian Yu and saw Thea. Oliver then confesses that he killed Thea’s drug dealer and how he failed as a brother.

Once at Nanda Parbat and League of Assassin HQ, Thea goes through the Lazarus Pit but doesn’t remember Oliver, thinks Moira is still alive and offers loving words to Malcolm.

Because of Thea’s resurrection, Oliver has agreed to join the League. Diggle talks to Maseo and pretty lays a guilt trip on him especially when Maseo talks about Akio dying in this arms. 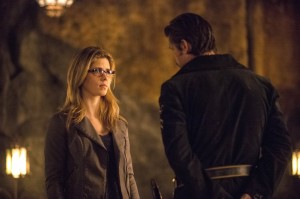 Meanwhile, Felicity is all pissed that Oliver is staying behind so she marches right up to Ra’s to give him a piece of her mind. Ra’s tells a story of not having a chance to say goodbye to his wife and kids when he became the new Ra’s and encourages Felicity to tell Oliver how she feels about him and also to say goodbye.

Felicity does go and see Oliver in his quarters and she professes his love and the two proceed to consummate their love. As much as I wanted Olicity to happen way back in season 1, as the show started to develop them as a potential couple, I honestly don’t see any romantic chemistry between Stephen Amell and Emily Bett Rickards. I was a bit peeved that Ray and Felicity broke up because I thought they had way more chemistry than Olicity. If these two are the end game couple, then I want to see smoldering, red hot chemistry that when I see Oliver looking at Felicity or vice versa, I see that chemistry there. I wanted it to be like the chemistry that Tom Welling and Erica Durance had in Smallville that was there from the very start, even before Lois and Clark were paired off romantically. Alas, I feel Olicity just doesn’t have that.

Regardless of how I feel about Olicity, Felicity acknowledged the two have slept together and offers Oliver an alcoholic beverage to toast what happened. Unfortunately for Oliver, Felicity drugged it so she can take Oliver back to Starling City.

Malcolm tells Felicity that what she has done is going to get them killed but he helps her and Diggle smuggle Oliver’s unconscious form out of Nanda Parbat. The trio do encounter League members but manage to get away thanks to Maseo.

However, when Oliver does come through, he uses his status as Al-Sa-Him, heir to the demon, to get other League members to stand down.

Later on, Oliver convinces Ra’s not to punish his team for doing what they thought was right. Ra’s then wants to know which League member helped in the escape and Maseo fesses up and begs Ra’s to kill him for his betrayal. Ra’s doesn’t as he blames the Maseo side of him for the betrayal.

So Team Arrow minus Oliver returns to Starling City. Malcolm tells Thea that Oliver stayed behind but good news is they are no longer targeted for death by the League. Thea, back to her old self, is not so pleased at the turn of events.

Felicity sees Laurel to tell her of Oliver’s decision and Laurel comforts Felicity.

Back at Nanda Parbat, we see Ra’s prepare Oliver for his transformation into Al-Say-Him and declares that Oliver Queen is dead. Amongst his new outfit is a necklace of an arrow head and we see Al-Say-Him in his new costume.