After tonight’s recap, the amount of clones that Ari Millen plays have been reduced by one, unless we are introduced to more Castor clones. But before we find out the fate of which of his clones is no longer on the show, lets break down all the clone action.

According to Scott, Cosima’s health has greatly improved and has the numbers to prove. However, they don’t know and figure the answer lies in the original genome sequence. Scott tells Cosima that Dr. Nealon, a Dyad doctor wants to see them. A this appointment, Cosima and Scott ask about the original Castor and Leda donor. Nealon says their identities died with the Duncans so the two scientists are back to square one.

Kristian Bruun as Donnie and Tatiana Maslany as Alison

At the soccer pitch, Donnie tells Alison that he doesn’t think it is a good idea to her to run for a school district seat against Marci Coates as they cannot afford to run a campaign. Donnie mentions the possibility of having the sell their house but changes his mind when Alison brings up the fact that Dr. Leekie’s body is buried in their garage. Then Alison’s former drug dealer, Ramon approaches her at the side of the field to tell her that he is getting out of the business so he can attend college, this gives Alison an idea. 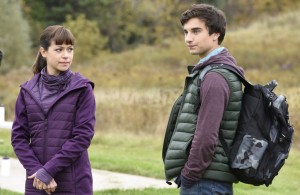 The idea is that Alison wants to buy Ramon’s pill pusher business and offeres $32,000 cash for the pills and the client list. At first Donnie says the two do not have that kind of money but changes his mind once he realizes that Alison wants to push pills to the ladies who are more than likely going to vote for her.

At some sort of desert army base, Helena is being put through a series of tests. One is a stress test that involves Miller pouring a jog over Helena’s towel covered head. It is put to a stop by Dr. Coady who mentions that Helena is pregnant. Another test is a series of mental tests that involve Helena wearing a Google glass type device but she doesn’t answer the question properly as she is distracted by her new scorpion friend.

Dr. Coady takes her outside for some food and tells Helena that Sarah sold her out to the army. Helena doesn’t believe the good doctor.

Dr. Nealon discovers that Rudy has escaped and calls someone with the bad news.

We then see Rudy welcome a woman that he picked up to his room. As the starts to slowly seduce her, Seth is also there unbeknownst to her. As Rudy and the lady get it on, Seth decides to join in on the fun but the woman gets scared. The next day. the woman files a police report and Art takes the case and calls Sarah, who seems to know the two men that Art is talking about.

Tatiana Maslany as Sarah and Michiel Huisman as Cal

Speaking of Sarah, Cal has taken her and Kira to an townhouse that he has rented for them. The three share a nice family moment playing hockey in the sort of empty house when Sarah received Art’s call. Before Sarah leaves, she and Cal share a kiss goodbye.

Sarah arrives at the police station, much to Art’s displeasure, and pretends to be Beth Childs in order to talk to the lady, who opens up to what happened. There is mention of a horse tattoo that both men have. Cosima researches a bit into what the horse tattoo could mean but suggests that Sarah contact Mrs. S so she can speak to Paul more about Project Castor and where Helena is.

Back to Rudy’s hotel room, Paul arrives and he and Seth act like good soldiers following Paul’s orders. Paul conducts some mental tests on Rudy and Seth using the Google Glass like device. Rudy does well however Seth struggles a bit but eventually does answer one of the questions.

Paul then gives them their orders to return back to base. We see Seth at his extraction point but we clearly see that he isn’t well when Rudy calls. Rudy tells his brother that he won’t return to base and asks if Seth is suffering glitches. We see Rudy break into Felix’s loft searching through stuff but passes by the Island of Dr. Moreau book.

Meanwhile, Felix is nursing Mrs. S back to health where the latter fears that Sarah will never forgive her for what she did to Helena. Felix tells her that Sarah will come around and cannot get out of the fight and gives her a new clone club phone so she can start calling her contacts. Sarah does arrive asking to speak to Paul but he has gone dark.

Paul has gone to see Cal to try and convince him to take Sarah and Kira away.

Sarah and Kira have returned to Felix’s apartment. Sarah is prepping a bath for Kira while the little girl is prepping bed time in her fort blanket. Unfortunately, also in this fort blanket is Rudy who takes Kira hostage and demands Sarah tell him where the original Castor samples are. Sarah doesn’t have and pleads with Rudy to let Kira go. After Paul’s warning, Cal races over to Felix’s but finds Seth blocking his way holding a knife to him. Cal grabs a wrench or tool of some kind to knock the knife out of Seth’s hands but again Seth suffers some glitches that eventually causes him to fall down in pain.

Rudy hears his brother in distress and eventually does let Kira go so he can go to Seth. When Rudy arrives, he holds Cal at bay while he sees Seth writhing in pain so he shoots him dead. Rudy grabs something from Seth’s pocket (his phone?) and leaves.

Back at Mrs. S’s, Sarah starts packing for Kira and arrangements have been made for Cal to take Kira away to Iceland for her safety. Sarah’s next step is to speak to the one Castor clone they know: Mark.

At Mark is shacked up in some motel with Gracie and in the bathroom we see Mark take a blowtorch to burn away his horse tattoo.

I know we are only two episodes in but what are your thoughts on the Castor clones? Are we able to have a favorite one yet?