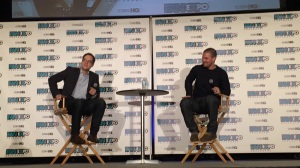 For a second year in a row Stephen Amell continues his trend of charming fans at his Fan Expo Vancouver 2015 panel. [Scroll down to the end for video highlights of his Q&A]

There were plenty of Arrow questions that included a lot on Olicity but there was also talk on the recent announcement that Stephen will be playing Casey Jones in Teenage Mutant Ninja Turtles 2.

“I get to play a vigilante on the big screen,” Stephen jokes the audience. He added with what he has seen and heard about this iteration of Casey Jones is that he will be similar to the Oliver Queen in older iterations of the comic books.

Since Stephen is doing Teenage Mutant Ninja Turtles 2 is more movies in his future. Doing a movie was important to me, as much as I love playing Oliver Queen, it was important for me to stretch out. I know I am playing another vigilante, you will have to trust me that Casey Jones is different than Oliver Queen but filming a feature film is different from filming a television show.

Stephen is excited to be working with Paramount, the studio releasing Teenage Mutant Ninja Turtles 2 and director David Green, who is a big Turtles fan that sold him on the concept.

Stephen will begin shooting Teenage Mutant Ninja Turtles 2 in Manhattan after attending Calgary Expo and will be filming it during the summer and might be shooting both Arrow and Turtles for a bit.

Of course what people really wanted to hear from Stephen about Arrow and what is coming as season 3 winds down. Like how show creatd a relationship root for if happen who knows 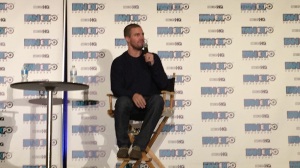 On Olicity and whether it is going to happen: “I liked we created a relationship on the show, Oliver and Felicity, that the fans really identify with. I don’t know if it is ever going to happen.”

A fan asked if there is going to be a death in season 3 and Stephen was a bit mum but says that there is always a death in a season but doesn’t know if it is a oh no death. When he was pressed if a main character would die, he says fans will have to tune in.

On what advice he would give to Oliver is to lighten up. “We are going through a couple of steps in the latter half of the season that are really going to fundamentally alter the way we are going to do the show that the Oliver we find in season 4 will maybe crack a smile once in awhile.”

When asked if Oliver is going to give into Ra’s Al Ghul, Stephen replied that he is going to have to as he is better as psychological warfare than he is.

A fan asked if Stephen’s favourite Olicity scene is still the one upcoming in episode 20 of season 3 and if he could give a hint. Stephen said it still is and no he could not give a hint. Could it possibly be the Olicity sex we saw in the recent promo?

Stephen got stumped when asked who would win in a fight: Arrow and the Suicide Squad versus Casey Jones and the Teenage Mutant Ninja Turtles.

A fan asked why is Oliver’s progress in the flashbacks so slow as he hasn’t learned Mandarin nor Russian yet not has he perfected martial arts. “We are only halfway through the [flashbacks]” he told the fan. “The flashbacks are going to get worse before they get better. They get pretty dark in the last stretch of episodes.”

When asked if he could play any other super hero, Stephen answered he would rather play the Riddler. 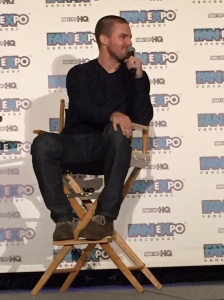 More of Stephen Amell at his panel

Someone asked if we would ever see scenes of the original Team Arrow (Diggle, Oliver and Felicity) this season as so far it has been heavy with new Team Arrow.

“I don’t really think so. Team Arrow has been in a real state of flux since Oliver went to fight Ra’s. We’ve seen Katie’s ascension, Barrowman’s involvement and even Willa Holland involved on te periphery and being knowledgeable and skills on the fighting side. I think Team Arrow is in a heightened state of flux for the rest of the season.” Stephen added that he was almost close to spoiling something.

Stephen then shared a funny story about filming with John Barrowman on episode 20 where Barrowman stated his farts don’t smell so Stephen challenged him to fart in his mouth to prove it.

In another fun part of the panel, Stephen lost out on a best 2/3 of Rock, Paper and Scissors.

On who won the Arrow versus Flash showdown, Stephen said the show deliberately didn’t show who did but indicated to the crowd that he did.

On whether or not the Arrow could defeat the Reverse Flash in the upcoming The Flash/Arrow crossover, Stephen at first played dumb to the question but then answered sincerely “One of my favourite lines in The Flash crossover when Oliver meets Dr. Wells and his immediate spider senses go off and says to Felicity ‘There is something off about that guy’.” “The cool thing about that is I don’t know how Oliver would do against the Reverse Flash maybe we will see maybe we won’t but the coolest thing about it is I got to work with my cousin Robbie [Amell] which I’ve never done before, which was awesome.”

A fan asked what villain Stephen would like to see. Stephen said he knows who the season 4 villain will be and can’t say. The fan pressed Stephen to name the villain he wants for season four and he quickly answered Slade Wilson’s son, Joe. The crowd seemed to like that idea. 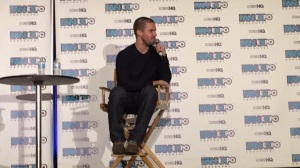 A fan, dressed as Elmo, and asked in his voice, about Stephen appearing in the Arrow/The Flash spin-off. Stephen said he will appear in all three shows. “We will be sprinkling characters in, I know there is a plan for one character from Arrow who isn’t one of the main characters of the spin-off will hover between all three shows and it will be their job. You will see a lot of interconnectivity next year.”

When asked his thoughts on the end of season 3 episode 18, where Roy sacrificed himself for Oliver, Stephen teased that the ending pales in comparison to the end of episode 19. “The ending of 319 … someone crashes through a table and it was legitimately the hardest hit I’ve seen someone take on the show.” Stephen then revealed it was a woman that took said hit.

A fan asked if Stephen would ever want to play the Flash to which he replied no and that Grant Gustin is already doing a superb job in the role. Stephen did say that he likes it when Oliver is in Central City as you get to see a lighter side of him and he gets to smile more.

The final question of the panel asked if time travel exists in Arrow since it exists in The Flash.