We are nearing the end of Bitten’s second season and it seems that it has really flown by.

We open up 4 years ago and we see the moment where Ruth rips Clara of her powers. It seems that Clara was using her spells to kill people for money.

After being stripped of her powers, Clara goes to see Aleister as a street perform using his powers and spouting his rhetoric to the crowd. The canister Aleister uses to gather money has the Infinity Alliance symbol on it. Clara calls Aleister Timothy and tells him she is the reason he is alive. Aleister then states that Clara must know who he is; she replies he is the prophecy.

Aleister is in midst of hiding his body when Nick and Jeremy call put for Clay. Aleister hits head to feign being hurt and he just woke up.

When the trio return to Stonehaven, Ruth says they need to take Savannah back for her initiation ceremony as her powers are coming strong and needs a talisman. “Clay” suggests that they perform the ceremony at Stonehaven if they are so worried about Savannah that it is better to get it over with.

As Savannah is prepping for the ceremony, Elena gives a photo she took to her to help her get through the ceremony. In the first part of the ceremony, in Stonehaven’s study, we learn the actual ceremony involves fire and rats, something Savannah isn’t too comfortable with and wants Elena to be with her. Ruth and Paige says that Elena can only be there at the beginning but not for the entire ceremony.

In Elena and Clay’s room, “Clay” doesn’t understand why Elena wants to help Savannah. And from the way “Clay” was behaving, the way he touched her shoulder and kisses her, she knows something is not right with Clay.

In the basement of Stonehaven, Paige is prepping different kinds of wood for the ceremony when Nick comes in and starts to kiss her and says he can’t stay away from her. Paige says they don’t have time for that but Nick says they need to make time so the two get it on. It really does seem like the two are in love with each other.

In the woods, Ruth is setting up a hut for the ceremony while “Clay” supervises. Nick and Paige come and Nick says the hut is in the wrong location but “Clay” stops him from moving it when he insults Paige. Nick and “Clay” come to blows but Paige calms Nick down.

Elena confronts “Clay” about fighting Nick and when he places blame on the witches, he starts to get aggressive with Elena to the point of almost raping but she punches him away. Later, Elena asks Paige if Savannah’s out of control powers might result in messing with people’s minds but not know it. Elena mentions what Aleister did to her mind in the compound. Paige says it is possible but that Elena should talk to Clay about her concerns.

Jeremy yells at “Clay” for fighting Nick and he tells the Alpha that he is worried about Elena’s bond with Savannah and how it is dangerous and more so after the ceremony. “Clay” tells Jeremy what Elena went through at the compound which included her having to change in front of people including Rachel. Jeremy is stunned Elena said nothing and will deal with it.

While all of this is going on Clay is stuck in his subconscious. Aleister mocks him but also admires Clay for still being around as most people just die after being possessed. Throughout, we see that Clay is trapped in the Stonehaven of his mind and with him is him as a child and Malcolm, who tells him he needs to try and different tack to get out the mind trap. Malcolm tells him to go basement to confront his fear and in the cell is Clay’s wolf form that he eventually lets out.

Aleister is at a warehouse setting up something that involves a spell, a circle of fire and a noose.

Meanwhile, Elena is doing some research through Aleister book to see what is wrong with Clay. Elena tells her theory to Jeremy that Clay has been possessed by Aleister and offers up the fact that she never told Clay about her changing in front of Rachel. When the two go to the shack where “Clay” was found, we see Aleister’s body is gone but they find the Infinity Alliance symbol so know that Aleister is alive and that Savannah is in danger.

In the woods, Savannah is at first hesitant to go through the ceremony especially that Elena isn’t there. But after words of encouragement from Ruth and Paige, she successfully goes through the ceremony. However, “Clay” shows up in front of the hut and takes her.

At Stonehaven, Ruth tells Jeremy that they need to get Aleister out of the circle he has drawn to then kill his body thereby killing him but also Clay. Jeremy doesn’t want to kill his son but Ruth says that Clay is already dead as possession spells are always fatal.

The werewolves learn that Aleister is at a foundry and we seem him stick Savannah in the trunk of car, with Aleister’s body and her talisman on driver side visor. Aleister leaves the car at the side of the road and uses Clay’s truck as his new vehicle. Ruth and Paige perform a spell to locate Savannah.

At the foundry, Jeremy tells Nick and Elena what they need to do, both are not happy about it and refuse to accept. Nick knows that it has to be done. 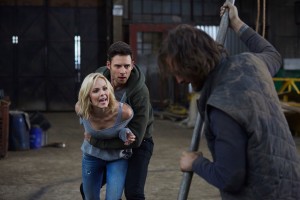 Jeremy fights Aleister and they go back and forth but Jeremy manages to get Aleister out of his circle and stabs him with a pole. Elena comes in and wants Jeremy to stop killing Clay’s body while Nick holds her back. We see Clay start to change into his wolf form, telling Elena that Clay is back and the two are reunited

Unfortunately, Aleister is now back in his body and wakes up in the car. Aleister grabs Savannah’s talisman and lets her out of the trunk. Savannah is surprised to Aleister alive and tries to escape but he does the whole lock and key thing. With Savannah now under his control, Aleister makes her drink the vial of Elena’s blood. A big wind blows and then Ruth and Paige starts to feel the effects and Ruth nose starts to bleed and tells her daughter that it is beginning of the end.

Only two more episodes remain and will be interesting see what happens next.