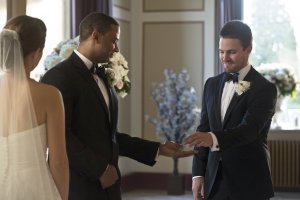 We are cordially invited to the wedding of Lyla Michaels and John Diggle. Of course, Oliver misses out on the photos but shows up on time for the actual ceremony. Oliver is also thrown for a loop when Felicity’s plus one is Ray Palmer.

Lyla calls Diggle to say that their officiant, a Rick (which I take to be Rick Flagg) can’t make the ceremony so Ray, a minister, jumps in to officiate. 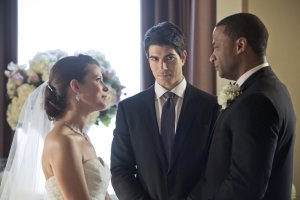 Ray is being very funny at the ceremony and Felicity is eating it all up while Oliver looks on all jealous. Lyla and Diggle exchange vows and the two are pronounced man and wife.

During the reception, Roy and Thea join the bride and groom on the dance floor while Oliver and Laurel talk at the bar and comments on the cast that she is sporting. Laurel says she got injured from training with her new training but neglects to say it is Nyssa. Felicity then joins them holding on to the bouquet. Laurel leaves them so they can talk and Oliver asks if Felicity is happy with Ray; she replies that she is. However the happy mood of the wedding party is interrupted when everyone gets alerts on their phone that the Arrow has started killing again.

When Team Arrow and Lyla return to the Arrow Cave to watch a press conference held by the mayor with Lance, Laurel and Ray by her side. Laurel is quick to defend the Arrow while Ray vows to take the Arrow down, something that Felicity wasn’t aware he was going to do. Everyone knows that this is all Ra’s and not taking rejection lightly. Oliver knows that Ra’s is doing this to turn Starling City against him so that he will take up on his offer.

Roy volunteers to gather information on the League’s next possible target while Diggle and Lyla are awaiting their orders. Oliver wants them to go to the airport for their honeymoon as he can handle things.

When Lyla and Diggle get into their limo, Deadshot is there to say that the Suicide Squad have a mission. Arriving at ARGUS HQ, Waller tells Lyla that she and the Suicide Squad is being sent to a fictional country called Kasnia to rescue a US Senator, Joseph Cray who is being held hostage because of a military coup. Diggle is joining the mission to ensure Lyla is alright.

The Suicide Squad, which now includes Cupid, arrive in Kasnia. Apparently, Cupid is still stuck on the Arrow. When Deadshot hears the newlyweds talk about love and family, he makes a comment that for people like him, love is like a bullet to the head.

We get the backstory of Floyd Lawton, who has returned home from war. Lawton shares a sweet reunion with his wife and meets his toddler daughter Zoe for the first time. Unfortunately, Zoe is shy around him. Sometime later, Lawton is drinking and yells at his daughter for not wanting to eat a sandwich he made. His wife wants Lawton to talk to someone about what happened to him during the war as he hasn’t been able to talk and is distant. Lawton then pulls out a gun and points at this wife and tells her that he was ordered to kill lots of people over there. His wife gets scared and he backs off once he realizes what he has done. Mrs. Lawton calls the cops and we see Lawton in prison, who is visited by a woman from HIVE offering to pay him lots of money to be an assassin. Lawton doesn’t want to take the job as all he wanted was to be with his family. When this HIVE drone tells him that the restraining order from his wife puts a wrinkle in that so Lawton asks who is first target it. She replies: Andrew Diggle.

Back to Kasnia, the arrive at the hospital where Cray and the hostages are being held. The Suicide Squad comes in guns a blazing and takes out some guards. When one guard is about to kill Cupid, Deadshot pushes her out of the way and takes a bullet from her. Because of that action, Cupid turns her affection over to Deadshot. In all the confusion, Cray is forced to reveal his plan. Cray didn’t expect a squad to be sent to rescue him. The plan was that Cray was supposed to act the hero in rescuing all the hostages but now he is forced to kill them all as they are a witness to his plan. Cray is doing all of this so when he runs for President, he will seem quite heroic.

The Suicide Squad hears all of this in an infirmary and when Diggle goes to tend to Deadshot, notices the tattoo of his brother’s name on his chest.

While forming a game plan, Lyla notices that bombs have been planted to blow up the hospital. Lyla wonders what they are doing because the last thing she wanted to do was leave their daughter an orphan. Diggle believes that Deadshot is right about trying to be who they are but also having a family. Deadshot is flattered that Diggle thinks he is right and the offers a game plan to get the couple home to their daughter.

The plan does work but not without a lot of gun fire and arrows being fired. The hostages are rescued plus Cray. However, Deadshot stays behind to ensure everyone escapes. And when the bombs go off, Deadshot perishes. Although, I am not 100% sure he is truly dead.

Back at Starling City and their home with baby Sara, Diggle tells Lyla that is going to quit Team Arrow. Lyla doesn’t want Diggle to as the work he and Oliver are doing is good for the city. Lyla then tells Diggle that she has quit ARGUS because Waller actually hushed up the whole Kasnia mission so the public won’t know the truth about Cray.

Arrow versus the Atom

Roy brings news that there is a huge drug shipment coming in and most likely the League’s next target. Roy wants to help but Oliver tells him to stay behind as he can handle the League.

At the warehouse, the League, dressed as the Arrow starts killing the drug dealers. Oliver comes on the scene and fights the League members. When Maseo arrives, he gives Oliver a warning and he leaves him to clean up after the mess left behind.

As Oliver surveys the scene, the ATOM flies by and uses the X-Ray vision of his mask and the facial recognition software within to identify the Arrow as Oliver.

At Palmer Technologies, Ray tells Felicity he knows that Oliver is the Arrow and that she has been working with him. Felicity tells Ray that Oliver is being framed and that he hasn’t killed anyone in two years. Ray thinks that Felicity judgement is being clouded because she has feelings for him. Felicity says she had feelings for him but she does know him better than anyone and wants Ray to trust her. Ray did trust her or thought he could and thought he found a partner in his work, mission and life but now doesn’t really know.

Felicity goes to the Arrow Cave to tell Oliver that Ray knows he is the Arrow and that he used software she developed for his super suit. Roy is impressed that Ray made a suit while Oliver is mad that Felicity decided not to tell hi about Ray’s mission to protect the city after what happened to his fiancee. Felicity then tells Oliver that Ray is probably at the police telling them that he is the Arrow.

Fortunately for Oliver, Laurel is taking Ray’s statement and doesn’t believe anything Ray says. Ray realizes that Laurel is protecting Oliver and also that she is working with him as the Black Canary when he notices the cast and the fact that she used to train with Ted “Wildcat” Grant, a former vigilante. Ray realizes it is futile to argue and will seek justice another way.

Oliver pays Ray and visit and the two have it out about Felicity and the purpose of their hero alter egos.

When Oliver returns to the Arrow Cave, it is to an upset Felicity who wonders if he was telling the truth about wanting her to be happy with Ray. Oliver says he was but that was before he knew that Ray was the ATOM. Felicity mentions that Ray wants to be a hero and a human but Oliver thinks he is naive for wanting his mission and Felicity in his life. Felicity is alerted to a 911 call at some plant so Arrow and Arsenal check it out in case it is another League hit. 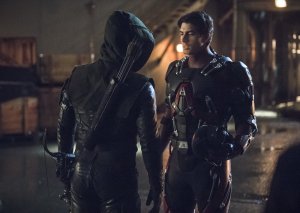 When they arrive at the plant, it was actually a ruse by the ATOM to lure them there so he can capture the Arrow. The ATOM takes out Arsenal so it just he and the Arrow. There is a pretty nifty fight that goes on where we get to see the suit in action but the Arrow does manage to short out the ATOM suit. Arrow tells Ray that the old him would have killed him and tells him that Felicity chose him and so he should trust her and walks away.

The next morning, Felicity apologies to Ray who also apologies. The two make up adorably. When Felicity goes back to the Arrow Cave, she informs Oliver that Ray is going to talk to the mayor to say he believes there is an impostor out there.

When Ray meets with the mayor to say this, Lance isn’t too happy with the billionaire’s flip floppy nature while Laurel is happy that Ray is on their side. Laurel wants a press conference to clear the Arrow’s name but there is a lot in fighting happening so the mayor wants them to stop arguing but she gets shot and killed by an arrow. We see that it is Maseo who pulled the quiver and sets his next target to be Felicity where the episode ends.

This recap has gone on long enough so until next week where it looks like Lance is all pissed off and ready to take down the Arrow.