We open with Savannah, obviously having a dream, as she is running around Stonehaven in a white night gown. Savannah makes it to the greenhouse and she finds Elena on a table being eaten by an unknown man, Elena is asking Savannah for her help but Savannah tries and turns to leave but is stopped bu a group of people. Elena’s guts are showing and tells Savannah that they will all be dead by dawn.

Back at Stonehaven, Elena is cutting her hair and Clay emerges from the shower. Clay thinks they should get away for a while  and when Elena starts to talk about her time being Aleister’s prisoner, Clay apologies for taking so long to find her and thought that he was going to lose her. Elena promises that will never happen.

Downstairs in the study, Jeremy is meeting with the Alpha Council and showing proof of Malcolm’s death. Roman, the Russian Alpha, wants to know details and when Jeremy shares that Elena was the one to deal the death blog, Eduardo, the new Spanish Alpha ridicules Jeremy for letting another do his job. Jeremy retorts back that it is his role as Alpha to ensure a job gets done and not who does it.

Roman insists on speaking to Elena and when she comes down to speak to the Alphas and shares how she killed Malcolm. Talk then turns to the Alphas, who are curious to know how she survived the change as most have tried to turn a female into a werewolf. Elena explains that she survived because of Jeremy’s guidance and that the Alpha council would be wise to listen to Jeremy.

Meanwhile, at Aleister’s compound, Paige performs a spell to destroy Aleister’s spinning top while Nick is burning all the blood samples. When Nick comes across the box labeled with Elena’s name, the show makes a point to note the box is empty. Paige then shows up and Nick mentions seeing the Infinity Alliance symbol everywhere but notes that the body they think was Aleister that they burned didn’t have the symbol on his neck.

Paige then shares she wishes she could have done more with Aleister, maybe perhaps stop him as he is her half-brother. Nick tells Paige there was nothing she could have done then asks her what witches do if people find out about them. Paige says nothing as they are very careful no one. Nick tells her that is someone finds out about werewolves, they kill them. Nick then shares that when his dad died, he let him know his mom’s name: Lily. Nick admits to Googling her and knows she works at a restaurant in Hawkesbury, Ontario. When Nick and Paige check in with Clay, Paige tells him that they will make a short stop over to Hawkesbury before heading back to Stonehaven.

Nick is stunned at this but Paige insists that all they have to do is go to the restaurant, see Lily and that’s that, and maybe even just stay the night. When Nick and Paige arrive into town and are seated at a table, Paige notices that Lily’s section is a table by the window. Paige asks to move to that table and manages to coax a shy Nick to come over.

Back at Stonehaven, as Elena and Roman are walking the grounds of Stonehaven, Eduardo and Jeremy have a talk. The crux of the conversation is that Eduardo wants Jeremy to kill Roman by nightfall or else Nick will die. Eduardo knows that Nick is in Hawkesbury. Jeremy gets Clay to call Nick but unfortunately he has left his cell phone in the car, which gets broken into by a Spanish wolf and stolen. Jeremy then gets Clay to follow Eduardo as he believes there is more to his ambition than killing Roman.

Clay follows Eduardo to a park where he is meeting with Karl Marston, the Mutt from season 1. After the meeting, Clay finds out from Karl that Eduardo wants to kill Jeremy to gain control of North America.

At Hawkesbury and at Lily’s restaurant, Nick hears her story of how she came to own the restaurant. Lily then shares how she lost her fiancee and son at the age of 17 and never got over them. We see Nick very moved by her story. Lily recommends a B&B for him and Paige to stay in, and when the two arrive, Nick shares that he feels guilty after hearing his mom’s story. Nick shares how much is father loved his mom and Paige asks if that is what he is looking for. Nick says that he is looking for someone where he has no secrets and he can share anything with. We see Nick look at Paige and pretty much knows that she is probably it for him and she feels it too. The two then proceed to have sex. I have to say that these two are my favourite part of season 2. I really enjoy their love story and great to see Nick not be the playboy but actually connect with someone. Plus Steve Lund is sexy as hell and shows great chemistry with Tommie-Amber Pirie.

On the porch of the B&B, Lily comes to see Nick and Paige. Lily admits that she knows who Nick is and was hoping he would have said something earlier at the restaurant. Lily shows pictures that Antonio has sent her and is happy to be reunited with her son. Nick doesn’t know what to say and leaves. Paige follows and convinces Nick to talk to his mom. Before Nick can, he sense a werewolf and drives to a wheat field to lure him away from his mom. Unfortunately, this Spanish wolf brought Lily as a hostage and calls out to Nick. In wolf form, Nick knocks down the wolf and drags him away. Lily tells Paige that she knows the wolf is Nick. When alone, Nick finds out from the Spanish wolf that Eduardo plans on killing Jeremy, Clay and Elena so that even if Nick lives, he has nothing to go back to. Nick slits his throat and when Nick puts his body in the car, tells Paige they need to get back home. Paige then tells Nick that she told Lily to go back to the restaurant and wait for him there.

When Nick goes to the restaurant, Lily admits that she knows that Antonio is a werewolf because he changed in front of her when Nick was born. Antonio told her that they had to leave to keep her and Nick safe. Antonio wanted to give her money but she said no so to keep her safe and that she can make it on her own. The only thing Lily wanted was a picture of Nick once a year. Last year was the first year that Antonio missed. Nick admits that Antonio is dead and tells his mom that his last words were of her and that he wanted him to find her. Mother-son share a hug and Nick tells Lily that he can never come back. Their good-bye is tear-filled and Nick looks at his mom one last time and leaves.

While touring the grounds, Savannah comes to see Elena to say she had a vision.

When everyone returns to Stonehaven, Roman isn’t happy that Jeremy allowed a human into Stonehaven. Meanwhile, Savannah shows Elena her vision. This time we see who is eating Elena and now Aleister is also there. Elena tells Savannah they have nothing to fear that Aleister is dead. However, Savannah doesn’t want anything to happen to Elena. 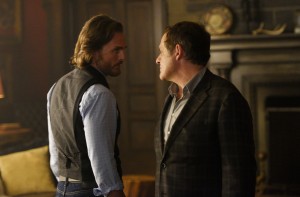 Later, Savannah identifies Roman as werewolf eating Elena. Roman is shocked that Savannah knows about them and demands that Jeremy kill her. Jeremy won’t and then tries to convince Roman of Eduardo’s plans.

When Eduardo returns to Stonehaven, Jeremy shows him Roman’s jacket that is tattered and has his blood on it. Eduardo seems satisfied at this and starts to monologue his plans. Down in the basement, Roman is there and doesn’t want to believe Eduardo’s betrayal but Elena makes him listen. Meanwhile, Eduardo’s pack invades Stonehaven but Elena takes care of some of them.

Eduardo calls for his pack but sees that some have been taken down and sees that Roman is alive and not happy. Jeremy goes in to kill Eduardo but a Spanish wolf captures Savannah. This forces Jeremy to let Eduardo go and he starts monologuing again. Savannah notices blood starting dripping from the ear of the Spanish wolf and he starts to bleed out like Dr. Bauer. This commotion allows Eduardo to escape into the forest. When Clay arrives back to Stonehaven with Marston, Jeremy gets Clay to go after Eduardo. Jeremy thanks Marston for his help and I am not quite sure what is happening between these two as it seems they have a tentative trust with each other. Later, Roman promises Jeremy that the Spanish wolves are finish and lets Jeremy decide what to do with Savannah.

While Elena is cleaning up Savannah, she assures the teen that what happened to the Spanish wolf was not her fault. Savannah tells Elena that it wasn’t her.

Back on the grounds of Stonehaven, Clay is chasing Eduardo but is stopped by Aleister who tells him that Eduardo isn’t the enemy he should be concerned about. Clay is stunned to see Aleister as they thought they killed him but vows to kill him again. Aleister then tells Clay that he wants to work with him. Clay says he will never help Aleister who responds that he won’t have a choice. We then see Aleister possess or shape shifts into Clay’s body with Aleister’s body falling to the ground. “Clay” then moves “Aleister’s” body into the shed.

Interesting twist. Let’s see if people will notice this, especially Elena. Hopefully, the Pack and Elena will see right through this especially if “Clay” doesn’t call Elena darling. Looking forward to seeing how this plays out.