It’s been a couple of weeks since Ra’s Al Ghul made Oliver the offer of taking over his mantle so we pick up immediately after. Ra’s takes Oliver on a tour of his Nanda Parbat compound, showing League members training and him offering some advice. Over a feast, Ra’s predicts that Oliver is destined to be alone meaning that he can’t be with the woman he loves and those that work with him, like the police, will turn on him. Ra’s then questions what Oliver exactly has accomplished as the Arrow. Ra’s believes Oliver can be the next Ra’s because he survived his sword.

When Ra’s shows Oliver the healing waters of his compound, he tells Oliver by becoming the next Ra’s he can use the League to however he wants to save not just Starling City but the world. Oliver believes that if he becomes Ra’s means killing people. As a measure of good faith, Ra’s lets Oliver, Diggle and Malcolm go, wiping out any blood debt at the same time.

Back in Starling City, we pick up where we last left Thea and that is letting Nyssa out of her cell so she can kill her for killing Sara. However, Nyssa doesn’t believe that Thea is a killer. Thea does her best to convince Nyssa how Malcome contrlled her to kill Sara. However, their conversation or confrontation doesn’t escalate to anything as Laurel and Roy see Nyssa out and try to fight her to take her down. Nyssa is only taken down when Roy tranqs her.

When Thea sees that Oliver has returned Malcolm alive, let’s say she isn’t too happy to see dear old dad. Later on, Laurel pays her a visit wanting to talk to Thea about her complex relationship with her dad. Thea knows it is messed up and is jealous that Laurel has a normal relationship with her father. Laurel tells Thea that things are so rosy with her dad right now. When Malcolm is awake, Thea just wants to kill him but doesn’t.

Back at the Arrow Cave, Oliver lets Nyssa go and Felicity is also none too pleased that Oliver brought back Malcolm alive and wants to know why. Oliver doesn’t give a reason but is itching to fight crime to show Starling City why he is around. So Felicity finds a crime in progress and Oliver, Roy and Laurel suit up. When they arrive at some warehouse, the crooks are looking for a particular shipment. As they find it, Team Arrow come on the scene and notice one of the guys has his mouth sewn shut. The crooks get away and the Arrow tells the Black Canary that she needs more training.

The Arrow drops off some of the crooks that Team Arrow managed to take down to the Starling City Police station and asks Lance to give him the name of their boss. However, Lance isn’t too pleased to see the Arrow because he lied to him about Sara being dead. Lance cuts his alliance with the Arrow off and back to his belief that vigilantes are dangerous.

We get one brief Ray scene tonight and it is clear that he and Felicity are dating as their work pow pow had quite the flirtatious air that gets interrupted by Oliver need her help. Felicity apologies if Oliver is upset at seeing her together with Ray but he only wants her to be happy. Oliver then needs Felicity’s help in identifying the man with his mouth sewn shut. Felicity ids him as Michael Amar aka Murmur (Adrian Glynn McMorran) who was released from the police because he was beaten by the cops to confess a crime he didn’t commit. Fun Fact learned from Green Arrow TV is that McMorran also played Jeremy Creek the first ever meteor freak from Smallville.

It was basically all about Oliver keeping Maseo and Tatsu’s son, Akio safe. Akio tells Oliver that they should go to the botanical gardens as that is the spot where his parents to go if they ever were separated. So the two go there but Oliver notices men in suits talking into ear pieces so knows they are in danger. The two make a run for it and while they are in a Hong Kong market, Oliver runs into a very much alive Shado! Vancouver filming fun fact: The botanical gardens is actually Dr. Sun Yat-Sen Classical Chinese Garden in downtown Vancouver, just at the entrance of Chinatown.

Back to the present, Oliver returns to the Arrow Cave and Roy tells him that the crooks took only low grade diamonds. Roy thinks they should ask Felicity for help but Oliver says that is off the table so Roy goes asks people from his criminal days what they know. Diggle sees that Oliver is upset and manages to get out him the offer that Ra’s made. Oliver then asks what difference have they made as the Arrow since the people they put away are free and that Ra’s predicted that Lance would turn on him and that he would be alone. Diggle thinks he is being ridiculous because they are making a difference and Felicity is with Ray for now. Oliver thinks he might be better off becoming the new Ra’s Al Ghul.

Speaking of that, Nyssa returns to Nanda Parbat and when she hears that her dad offered Oliver to be his hear, she is not happy being displaced. Nyssa believes it is because Ra’s never approved of her love of Sara. Ra’s says it is because Nyssa allowed her grief to be her weakness. The two get into a scuffle that results in Nyssa being banished from her father and the League. Ra’s then uses the water to heal his cut hand. So the water definitely is the Lazarus Pit.

Back at the Queen sibling loft, Thea tells Oliver that she has been so messed up since their mom died and the reason why she didn’t kill Malcolm is because of her. Thea then leaves their place to supposedly get soup for her sick dad. Malcolm then learns of Ra’s offer to Oliver and says that it really isn’t an offer but a demand.

When Oliver returns to the Arrow Cave, Felicity is there and gives her opinion on Ra’s offer. Oliver is seriously considering it as he feels he has accomplished nothing positive as the Arrow but only negative things. Felicity tells him that when they all thought Oliver was dead, the whole team looked in themselves to see why they are part of Oliver’s crusade and that Oliver needs to do the same. Roy and Diggle come in and tell the two that the diamonds are being used to create bullets that can pierce police body armour. Team Arrow realize that Murmur is going after the cops that beat out the confession in him so Oliver and Roy suit up. Felicity tries to call Lance to warn him but he is ignoring her call. 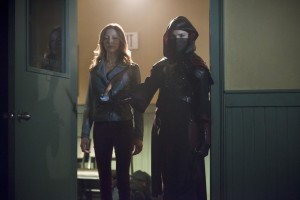 At the precinct, Laurel visits her dad to offer an olive branch, however, Lance is not accepting it. Lance tells Laurel that while he loves her, he doesn’t think he could ever forgive her for lying to him about Sara. While father-daughter talk, Murmur and his gang invade the precinct and a shootout occurs. Lance gets Laurel to make a run for it and when she does, Nyssa is there to help take down Murmur and his gang. Laurel helps too and Arrow and Arsenal join the fray. Arrow saves Lance before Murmur can kill Lance.

Murmur does get away for a second but the Arrow does catch him and Lance wonders if the vigilante was looking for a thank you. Arrow says he doesn’t do what he does to get the thanks.

After everything is over, Roy is at home when Thea arrives at his doorstop looking very lost and asking to stay at his place. Roy welcomes Thea to his home and the two proceed to kiss.

Also, Laurel and Nyssa are becoming new BFFs over their daddy issues, their love for Sara and also Nyssa will help train Laurel.

At the Arrow Cave, Oliver thanks Felicity for getting him to ask himself why he is doing his crusade and he won’t becoming the next Ra’s Al Ghul. Felicity tells Oliver that as long as he is in her life, she will be happy.

Later Oliver meets with Maseo to tell him that he is not accepting Ra’s offer, that he has more to do as the Arrow. Maseo tells Oliver that Ra’s won’t be pleased and there will be consequences.

And we see that consequence at episode’s end when we see some of Murmur’s men plotting their next move because they still have some diamond bullets. But they are stopped in their tracks by what looks like the Arrow killing them but letting one go to tell others what he saw. We see the man under the green hood isn’t Oliver but Ra’s.

Was Oliver right in turning down Ra’s? I guess we will find out how the dominoes fall with him saying no.