Well apparently Kai is good now? I certainly didn’t see that coming but I can’t say I was surprised. Like I’ve said before, oftentimes Vampire Diaries has trouble committing to certain stories. I have been a fan of Kai since day 1, but more so because of the creepy psycho that he was and what that persona brought to to the show. As we learned tonight, by killing Luke, Kai took on small bits of what made Luke..well… Luke. No, not the hair, but the sweet and caring personality. It actually makes for a nice juxtaposition compared to what we are used to, but I don’t know if I am quite ready for Kai to be good.

It’s Bonnie’s birthday (yay Bonnie’s back! I never thought I’d miss her but I totally did) and the poor girl is celebrating all alone in the desolate year of 1994. However, Elena and the gang have not forgotten the date either. They are getting ready to throw a party for their friend that evening to celebrate all of the great memories they have shared with her. It’s what Bonnie would have wanted. That is, everyone except for Caroline who can’t stop looking at Ms. Cuddles. Apparently when they were little, Caroline stole the original Ms. Cuddles and buried her somewhere but forgot where and a replacement Ms. Cuddles was bought.

Caroline is in a really rough place right now. Her mother is dying and her best friend is trapped in a 90’s prison. Sometimes it’s easier to find silly distractions then face your issues head on. In Caroline’s mind the only positive thing that she can do right now is find where she buried the original Ms. Cuddles. It’s the only thing that she can control and make right. And Stefan is right there to help her…with alcohol, of course. He gets it.

So, let’s get into the whole Kai thing. Since merging with Luke, Kai is having to tackle the emotion of empathy. It’s something that he has never dealt with before but unfortunately absorbed during the merge. He really wants to give Jo a letter that apologizes for all of the damage he caused to their family. He even dripped water out of his eyes while writing it…although he had no idea why that even happened. Sociopath problems.

Elena and Damon, who were having a little bit of fun with some cupcakes, agree to give Jo the letter only if Kai attempts to reach out to Bonnie in 1994. And since Kai is good now and all, he agrees.

Damon had left a note in a Salvatore atlas when he was in the 1994 world that Qetsiyah’s blood is still on Silas’ headstone. This would give Bonnie the magic she needed in order to get home on the next celestial event. If Damon and Elena can get Kai to show Bonnie the atlas then she would be able to start plotting how to get home.

Unfortunately for them, Jeremy discovers what the two are up to and does not approve. He is a little suspicious, and rightfully so, as to how a sociopath could become a good guy overnight. I am right there with you Jeremy! It only makes sense in Mystic Falls, really.

This point is further proven when Kai calls Elena out, and basically the entire series, for changing personalities overnight. One day she was a human girl in love with a good guy vampire and then overnight became a vampire and fell in love with the bad guy vampire. Therefore, it is possible for someone to change when circumstances are beyond their control.

Once Jeremy gets on board, Kai explains that he can get them to 1994 to see Bonnie but Bonnie will be unable to see them and they won’t really be able to touch anything. It will basically be like Ghost as he says. They all agree that they would rather just get there and figure it out then, even if Bonnie can’t see them. So, they arrive in the 1994 Salvatore house in time to see Bonnie celebrating her birthday with a bottle of bourbon.

It’s not entirely a odd way to celebrate your birthday if you’re alone and haven’t talked to anyone in months, but Damon knows what’s up. When him and Bonnie were trapped in the prison they both agreed that if either or both of them got to the point where they couldn’t take another day in the lonely world, they would drink the entire bottle and then kill themselves. Learning this alerts them all, including Kai who gets distracted and loses the spell. They all wake up in present day freaking out over the fact that Bonnie is planning to kill herself later that day in 1994.

After this traumatizing realization, Jeremy requests that only he be sent back to see Bonnie. This way, if Kai is using less magic Jeremy may be able to open the atlas or communicate with Bonnie in some other way. Kai agrees to this proposition because he is a whole new Kai. I already miss the old Kai. Bring back psycho Kai!

Meanwhile, Damon is sipping on his own bourbon upstairs when Elena comes in to have a relationship talk. You see, what Kai said earlier about her changing overnight has really gotten to her. She wants to know what Damon thinks about the matter and boy does he serve her up with some brutal honesty.

Damon says of course she became a different person the night she became a vampire. He reminds her that she was a human and human Elena chose Stefan. In fact, that’s who she was going to see that night when she died on the bridge. But when she woke up as a vampire all of the sudden things were different and her desires were different and Damon was an option. It must have been so hard for the Salvatore brothers to navigate their ways through this Elena saga, but they managed and are both able to look back positively and look forward positively as well.

The conversation gets cut a little short when the vengeful Liv returns and traps the two in Damon’s room so that she can kill Kai….which is not good considering he is what’s connecting Jeremy to Bonnie right now.

Liv finds Kai and a lot of fighting (stabbing) ensues. Basically, Liv stabs Kai in the abdomen and then Kai stabs Liv with a fork in the neck. He can’t bring himself to kill her though because of the sympathetic Luke inside of him. This hesitation results in her stabbing him in the chest with the fork and ultimately ends with Jeremy stabbing Liv. So much stabbing. Kai is able to get Jeremy back to Bonnie even though he is severely injured.

In 1994, Jeremy watches as Bonnie finishes her bottle of liquor meaning that her suicide is forth coming. He follows her to the garage where she closes all of the doors and starts Damon’s car. The fumes will slowly kill her. She leaves messages to her friends and records her goodbyes on a video camera. Jeremy watches in horror as she starts to cough a little more and become more and more affected by the car’s fumes.

Then all of the sudden she begins to talk to Jeremy. She can’t see him but he is able to listen to her telling him to always fight for what he wants and find his path, and to stay strong. It’s those last two words that really hold some weight. Bonnie’s Grams always told Bonnie to stay strong and she realizes that what’s she’s doing right now is the complete opposite. Bonnie wants to live and attempts to make it to the door, but she is too weak.

As usual, this is some phenomenal acting by Kat Graham. Bonnie is unable to make it to the garage door or even stand up for that matter. Even though she wants control, she can’t seem to grasp it. The scene is heartbreaking to watch. To see someone want to survive so badly and to see the person who loves her try and fail so badly to help is even worse.

Jeremy is still unable to touch anything but that doesn’t stop him. It’s almost like he uses everything that he is feeling to break though Kai’s spell and at the last second Jeremy is able to open the garage. Bonnie can’t seem him but I swear she can feel him. Her own guardian angel was able to help her out of the garage.

When Jeremy returns, Damon and Elena are able to escape their entrapment by taking Liv out via chimney fire. Jeremy knows that Bonnie will be okay after seeing her will to live. Elena tells him that it’s time for Jeremy to move on and out of Mystic Falls. Entertainment news reports have said that Steven McQueen will be leaving the show by the end of the season so this just seems to be his push. Elena wants him to apply to art school and Jeremy thinks that it’s a good time as well. He feels okay leaving knowing that Bonnie is going to be okay. He was able to knock the atlas down to the right page during his visit to 1994. 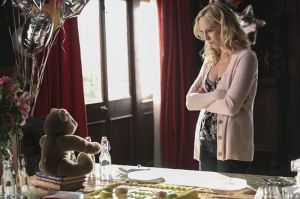 Meanwhile, Caroline is still looking for the original Ms. Cuddles with Stefan. She is just digging random holes hoping that the bear will turn up and he is making fun of her from a distance. It’s clear that he is just trying to help keep her calm and provide her with different variables of coping, but she still doesn’t want any of the negativity. They get in a little tussle and have a tender moment in which they almost kiss! I repeat everybody, almost kiss! Stefan spots the bear and the day turned out to be not a total wash. Caroline set out to find something that connected her to her best friends through means that further connected her to Stefan.

To finish things out, Elena and Damon hook up. Elena realized that it doesn’t matter what human Elena wanted because that girl is not around anymore. No matter what has happened, she has always found her way back to Damon and she is ready to stop worrying about the past and start moving on with the future.

Also, Enzo and Matt are still a duo that we should care about even though they are getting the most boring story line right now. Enzo wants to get to know Sarah Salvatore a little more so his efforts to expose Stefan as a horrible brother will be easier. He enlists Matt to pick up Sarah around campus and gain her trust and hopefully down the line she will want to become a vampire and Stefan will not be able to do anything about it. It really doesn’t make much sense to me either.

Back in 1994, Bonnie stumbles into the house and finds the atlas that Damon marked and Jeremy made visible. She is en route to Nova Scotia (which should be interesting) and hopefully en route to Mystic Falls shortly after.