I am back in town after being gone off and on for two weeks and ready to get back to Pawnee, Indiana.

I’m still upset about the decision to play back to back episodes. I absolutely think that Parks has earned its keep and deserves to have their final season treated just like any other. The show itself and most of the stars are on top of their games right now and with that comes more people watching on Netflix and therefore watching the new season in real time. It’s just hard as a viewer to fully appreciate what’s going on as we see things happening so quickly. But I digress. At least we are getting this final season!

This episode clearly shows how we are moving the series closer to it’s finale. We are getting a glimpse as to where some of our characters will be and what they will be doing when we part ways. I really can’t complain about the fact that Parks is looking to tie everything up neatly and how it should be.  I can complain for hours however about the fact that I wish they didn’t have to.

In this episode Leslie and April are heading to D.C. in order to meet with some senators about National Parks. Now, April’s running story line this season is that she wants to get out of government and do something that she really enjoys. Her only issues are that she has no idea what she wants to do and she desperately does not want to tell Leslie about leaving. It would break Leslie’s heart to see her protégé leave.

While in the airport during “designated chat time,” Leslie mentioned talking about April’s future. Seeing this as the perfect opportunity to give the news April begins to tell Leslie the truth. Unfortunately, she is interrupted by Leslie who has put together April’s 5 year government plan. Womp Womp. There is no way that April could say anything now considering how excited Leslie is about a)the beautiful binder b)the thrilling content of the binder and c)their new matching T-Shirts. 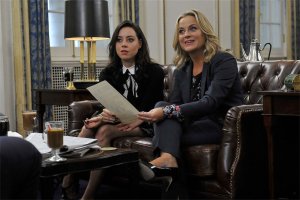 April attempts to crack jokes in their preliminary meetings to make it seem like she does not take the job seriously or that she may not be prepared, but Leslie brushes it off as her just being April. Of course, April is prepared and handles herself perfectly in their meetings. She has really come a long way and as we find out at the end of the episode, that all had to do with her job with the Parks department and the one and only Leslie Knope.

Back in Pawnee, Andy has taken it upon himself to find April her dream job. With the help of Ben the two find themselves at Very Good Building Company speaking with Ron about an open position at his company. Ron is ecstatic to hear that April is finally leaving government but he does not think the position he has will be a good fit for her. He does however agree to help the guys find something for her for when she gets back.

I think that it’s really sweet how all of them are rallying behind April’s decision to find something that she’s passionate about. I wish that April felt more comfortable going to Leslie about it. However, I can completely understand how scary it is telling your boss who gave you so many opportunities and guidance that you want to leave. It’s unfortunate that Leslie can be so fixated on something that she can’t always take the time to observe what others are feeling. She is just so passionate and truly believes that she knows what’s best, but at the end of the day if she were to be upset about April leaving it wouldn’t be that she was mad or not poud of April it would be that she would miss her.

Ben brings Andy and Ron over to Tilton and Radomski Accounting Firm where he is practically a celebrity. It’s the accounting firm that is always offering Ben a job, which he either turns down or takes and then quits shortly after. He tells punny accounting jokes to a bunch of men who them way too much credit (does that count as an accounting joke?) Lame attempt. I apologize.

The firm is opening up a new consulting wing and they all think that April would be great at it. It involves being creative, doing things one on one, and solving problems while also being able to fire people so therefore no one likes her. Unfortunately, they are no longer accepting resumes. That doesn’t stop this group though. They team up with Craig and Donna (Tom was MIA this week) to put together a new resume and employee portfolio highlighting everything April has done for the Parks Department as well as a $500 bribe from Donna (just in case).

Andy thinks that it would be smart to take matters into his own hands and puts fireworks in and around Barney’s car while prancing around wearing an April mask. It makes absolutely no sense, but that’s Andy for you. It certainly doesn’t help get April the job but with Ben and Tilton and Radomski Accounting Firm, anything is possible.

Back in D.C. Leslie is offered a new job and this one she gladly (and appropriately) accepts. A position opened up as Deputy Director of Operations of the Interior and it’s basically her dream job. She would have to take 44 weeks of classes where she can take notes, make binders, and learn learn learn! She would also have to move to D.C. and have a confirmation hearing. She accepts the job on the spot.

It was actually so relieving to see her accept it as that would not have been a viable  option in the past. The Knope-Wyatt family belongs in D.C. and for them to keep staying in Pawnee just wasn’t making any sense. Since the show is ending they can move there no problem. It also perfectly aligns with Ben’s new campaign for Congress. I love when bows are tied nicely!

This change in career path leads to an updated 5 year plan for April, who ultimately decides to come clean to Leslie that she doesn’t want to do government anymore and she quits. Leslie takes the news just about as poorly as April and everyone expected. She’s heartbroken and also upset to find out that Ben was in on it too- he’s dead to her now… and those were her actual words.

It isn’t until waffles with Madeleine Albright that Leslie understands that she needs to really think about April is feeling and not herself. Sometimes she gets so wrapped up in herself that she doesn’t notice when others are unhappy or simply trying to please her. She goes and apologizes to April and April tells her the only reason that she even wants to move on is because Leslie showed her what true potential she has, and gave her goals and the courage to really examine her life and find something that she’s good at. She is not turning her back on Leslie but rather moving forward because of Leslie’s impact. It was a truly sweet moment between the two.

Leslie checks back in and is now on a mission to help April figure out what she wants to do. It’s incredible the tenacity she has when she is passionate about something. Sometimes Leslie just needs a little push and guidance about what to be tenacious about. Leslie takes April to a company that helps people who are unsure about their career goals find their paths.

April comes out of the meeting knowing that she wants to do exactly what her career guide does. She wants to use her creativity to help clients one on one figure out what they want to do then send them  on their way forever. Leslie says she will do whatever April wants to help get her there. So it looks likes the Ludgate-Dwyer’s will also be moving to D.C. So many pretty bows!

Ben and the guys are able to convince the firm to look at April one more time and after much pleading they give in and decide to give her a meeting- mainly because they love Ben so much. Of course, April calls to tell them that she found a job, forcing Ben to once again turn down the Tilton and Radomski Accounting Firm.

That’s all for this episode. The next episode recap will be up soon!