If you are ever in Vancouver and want a dining suggestion, how about you try Patron Tacos at Robson & Hamilton. It is the location of Barry and Linda’s date where they were having the spiciest tacos in all of Central City. I personally haven’t eaten there yet but may try soon as it is close to my office.

While Linda and Barry’s date is going great, there is no rest for the Flash, as he has to stop a convenience store robbery and stop a jumper who is taken down to Eddie, in his only appearance of the episode.

From the last episode, we know that Dr. Stein is in Ronnie’s body and he goes to visit an old classmate of his to enlist his help but unfortunately, he flames on and critically injures the physicist. 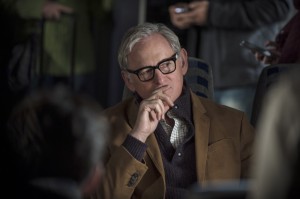 At STAR Labs, Team Flash learns about Firestorm’s latest sighting and when Barry asks to see a picture of Dr. Stein, he remembers meeting him on the train back to Central City hours before the particle accelerator exploded. The two talk about the particle accelerator and get all nerdy about it. When Barry arrives at his stop, he hopes to see Stein there and for no reason tells him how he is taking a girlfriend, who is not his girlfriend but a friend who happens to be a girl to the opening.

We then see Stein just outside of STAR Labs at the moment the particle accelerator exploded, the case that contains the Firestorm device drops out and when Stein grabs it, is the moment where two become one. We see Stein/Ronnie walking around when Stein sees his reflection it is Ronnie staring back but we see that he is sporting a wedding ring and he wonders what has happened to him in the month since the accident.

Barry, Caitlin and Wells go to visit Stein’s wife Clarissa and shows them a picture of Ronnie. Clarissa shares a tale of how Ronnie came into their home shortly after the particle accelerator to see her but she freaked out and he leaves. Clarissa mentions always having the feeling of being watched so Wells determines that if they do a stakeout, Stein will return to his home to see Clarissa. Knowing that Barry has a date with Linda, Wells asks him to be on standby.

While Barry had this real awesome date planned that involves dinner at a place called Paperclip then music at a jazz joint and if Linda isn’t sick of him, froyo but Linda has other things on her mind. Things are going hot and heavy between the two and we see Barry vibrate really fast (something Cisco and Caitlin warns him earlier in the episode that this could happen with his accelerated speed). Linda seems to like it but Barry stops and wonders if they are moving too fast but Linda likes fast. Unfortunately, Barry is called into action and has to leave Linda to deal with Firestorm.

Before having to call in Barry, Wells understands Stein need to return to Clarissa as she is his home as Caitlin is Ronnie’s home.

The Flash comes on the scene to confront Stein and request that he doesn’t flame one but he turns into Firestorm and flies away with the Flash. While on fire, the two fly around for a bit until Firestorm escapes.

The point of their battle is for the Flash to put a tracker on Stein. Barry and Caitlin bring Clarissa to where Stein is, which is underneath a bridge. Funny story, my lunch time walk today actually passed by this location, which is underneath the Cambie Street bridge near Nelson Street and Expo Boulevard. In the background, you see BC Place, and this episode was filmed in November as you see the logo for the Grey Cup blurred in the scene.

I digress. Clarissa confirms that Stein is in Ronnie’s body because he knew her favourite colour is stripe. The two ask Barry and Caitlin for help.

Meanwhile, Barry tries to smooth things over with Linda at Central City Picture News but doesn’t get very far as he is needed back at STAR Labs. Linda then asks Barry’s BFF Iris about Barry’s dating history. Iris says that Barry had feelings for someone that went unreciprocated. Linda realizes that it is Iris that Barry is hung up on. So Linda calls Barry to call it quits because he has feelings for Linda. When Barry confronts Iris about this, she denies stopping Barry from moving on and he says that he really likes Linda and is over her. We see that Iris is a bit hurt at this and earlier we see that she is not happy that Barry is dating Linda. After some wise words from Stein, Barry goes back to Linda and threatens to eat the hottest pepper in existence to prove that he is only interested in her. Barry starts to eat it when Linda stops him and agrees to go out with him. And I have say that I really like Linda and Barry. They really are showing real chemistry and Malese Jow is bringing such a fun vibe to Barry’s personal life. I would be happy is Linda sticks around for a long time.

Back at STAR Labs, Stein receives a hair cut and now looks like Robbie Amell. Stein is speaking quite eloquently than probably Ronnie ever did and when he uses a nickname that Ronnie used for Caitlin, she asks him to just call her Dr. Snow. Caitlin then examines Stein, who says that he has some of Ronnie’s memories including the spot where he proposed to Caitlin. Stein tells Caitlin that Ronnie loves her very much. We see the results of the test and Stein temperature is running 108 degrees fahrenheit.

Outside, Wells tells Barry and Caitlin that the only way to split the two men is to create a nuclear fission but that is dangerous to try. We also learn that Ronnie’s body is rejection Stein’s atoms and the way Ronnie’s body is running hot, it could all lead up to a nuclear explosion.

Detective Joe West and Cisco Ramone are on the Case

Joe has enlisted Cisco’s help in solving Nora Allen’s murder. They go to the old Allen homestead and ask the new tenant, a flirty woman named Sherry, if they can come in. Sherry opens up her home and Cisco and Joe do their thing. Using a super light, Cisco finds silver nitrate on a mirror that was there on the night at Nora died. Sherry bought the mirror at the estate sale and kept it. Cisco has managed to extract 10 images from that night and does a 3D projection. We see the two speedsters around Nora and a young Barry in the background. While Joe is looking at the picture, he discovers blood splatter behind some wallpaper.

Back at Barry’s lab, Cisco finds two DNA samples and Joe wants him to test against Dr. Wells. Cisco doesn’t want to has he believes Wells is not a killer and is a good man and refuses to help.

When Cisco returns to STAR Labs, he meets Stein in Ronnie’s body and finds it weird

When Wells says the only way to save millions of people in Central City is to kill Ronnie, Cisco, Caitlin and Barry realize it involves killing two people and Caitlin wants Wells to find a way to save Ronnie as she doesn’t want to lose him again.

In his secret room, Wells asks Gideon if they can turn the tachyeon device into a quantum splitter, she says it is possible but will delay his plans. Wells is willing to delay it as if they let Ronnie/Stein explode, there is no plan.

So Wells enlists Cisco’s help in making the quantum splitter to separate Stein and Ronnie. When done, Caitlin insists on going with Barry to place it on Ronnie, who has moved 30 miles outside of Central City to protect its residents.

Wells and Cisco are taking point at STAR Labs when a beep alerts Cisco to something. Cisco lies to Wells that the comms are down but we see him place a call to Joe to say that he found a DNA match. It is Barry’s but Joe says of course Barry’s DNA would be on the scene but Cisco says a level of a certain protein is only found in an adult so the only conclusion is that an adult Barry was there on the night Nora Allen died.

Meanwhile, outside of Central City, Stein is ready to kill himself, but Caitlin comes up to him the the quantum splitter that will save him and Ronnie. Caitlin tells Ronnie that she loves him and the two kiss. Caitlin places the splitter on Stein/Ronnie and it opens up to look like the Firestorm logo, I presume. But Stein flames on and his flame grows and it doesn’t seem to be working so Barry grabs Caitlin and runs as fast as he can to out run the mushroom cloud.

In the post credit sequence, Ealing is alerted to nuclear activity outside of Central City and prepares his troops to get Firestorm.

Next week’s preview doesn’t reveal the fate of Stein/Ronnie but focuses in on the time travel aspect of The Flash lore.